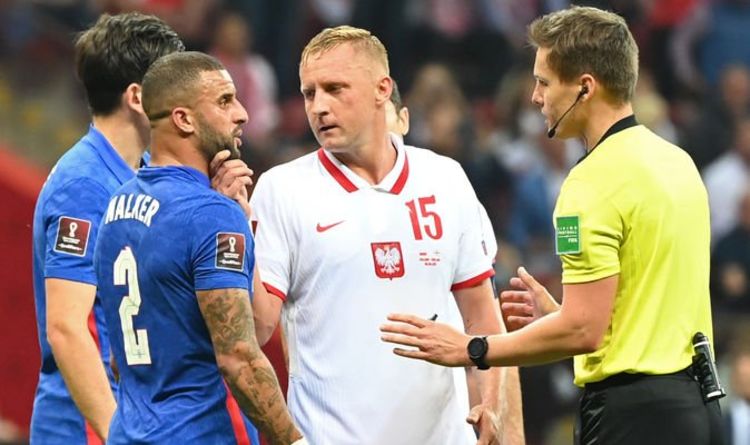 FIFA are set to investigate allegations of racism in the midst of the squabble between Poland and England players at half-time in Warsaw on Wednesday night.

Once again the issue has enveloped the Three Lions after players were subject to monkey chanting by fans in last week’s trip to Budapest to face Hungary.

On Wednesday night it was just the players involved, as tempers spilled over right on half-time when TV replays appeared to show Poland defender Kamil Glik pinching the skin of Kyle Walker in the Adam’s apple region.

Harry Maguire was booked for running up to push Glik as the players crowded angrily around them both, and it subsequently emerged that at least one of the England players thought he may have witnessed racist abuse.

FA officials are said to have made the accusations of racist abuse to fourth official Daniel Schlager at half-time.

Poland staff and players have strongly denied any wrongdoing over the heated on-pitch bust-up.

“During half-time, the English complained to the referee that racist offensive words had been used against one of their players,” Polish team manager and press officer Jakub Kwiatkowski revealed.

“However, this is complete nonsense.

“If this was the case, the case will be referred to the disciplinary committee, which will decide on the basis of video repetitions.

“However, I can guarantee that the rivals’ accusations are completely unfounded.”

Kwiatkowsk added: “The English FA said there had been a racist remark made but Glik says that is completely not true.

“I know the players and they have not done that and nor would they. We completely deny any allegations of wrongdoing.”

“It was an ordinary field jostling,” he said. “It all started with a free-kick for us. There was a fight for position, a scuffle.

“I tried to shake Walker’s hand, but he wouldn’t take it. It was a verbal scuffle, nothing else happened.”

The FA had nothing further to add and are happy to leave it in the hands of the appropriate authorities.

An official statement on the morning after the game confirmed FIFA is investigating the incident.

“FIFA is in the process of analysing the official match reports,” it said.

“The relevant information will be assessed by the competent disciplinary bodies in order to decide on next steps.”