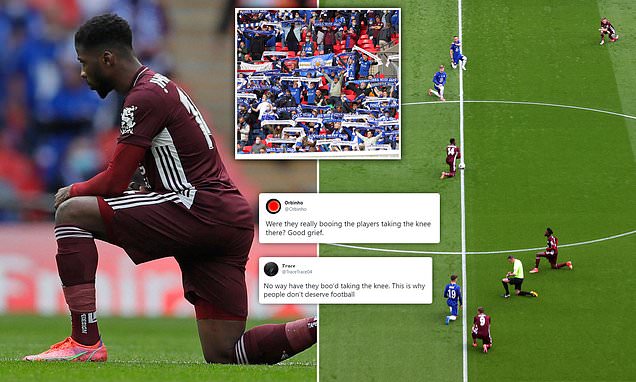 Fans at Wembley for the FA Cup final appeared to boo Chelsea and Leicester City players as they took the knee moments before kick-off.

A smattering of jeers could be heard as both sets of players, coaching teams and the match officials made the anti-racism gesture, which has become a customary action before all football games in England since last summer.

Those booing were then drowned out by loud cheers seconds later, before Michael Oliver officially got the Cup final underway inside the iconic stadium. 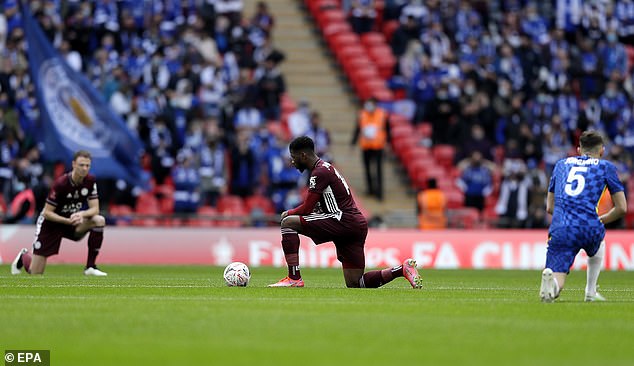 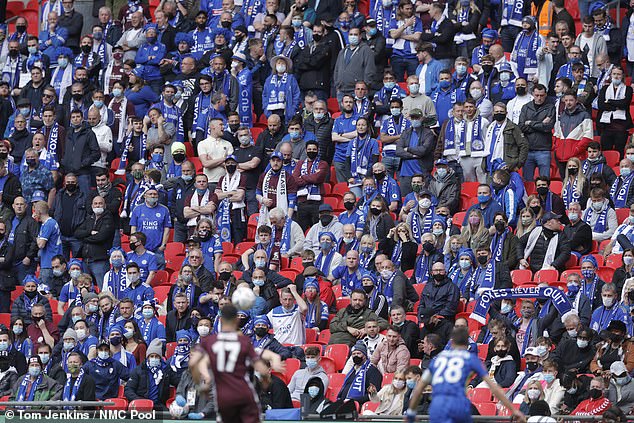 Wembley has welcomed back 21,000 supporters for the pilot event set out by the Government as they begin to ease lockdown measures on their roadmap back to normality.

However, some spectators were not happy with seeing the two teams taking the knee, leaving many online perplexed at the reaction.

One fan revealed his delight at hearing fans back inside Wembley before quickly being left dismayed by those booing the gesture initially introduced as a result of the Black Lives Matter movement.

The Twitter user wrote: ‘Some morons boo players when they take a knee and I’m reminded that people are also idiots. We can’t always have a perfect picture lol ever.’

Another couldn’t believe what they were hearing, claiming fans ‘don’t deserve’ football.

‘No way have they boo’d taking the knee. This is why people don’t deserve football,’ they tweeted.

‘Were they really booing the players taking the knee there? Good grief,’ one added. 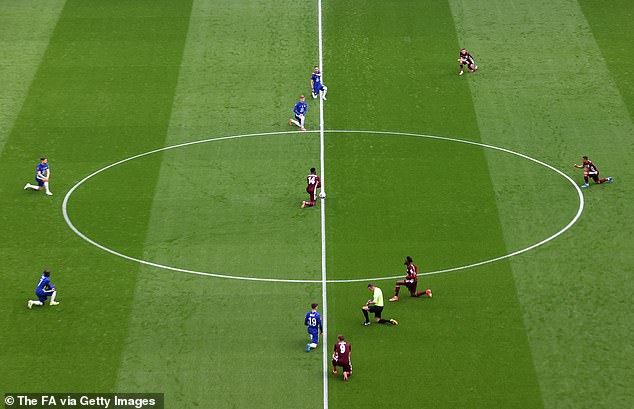 Both sets of players, coaching teams and match officials made the gesture before kick-off 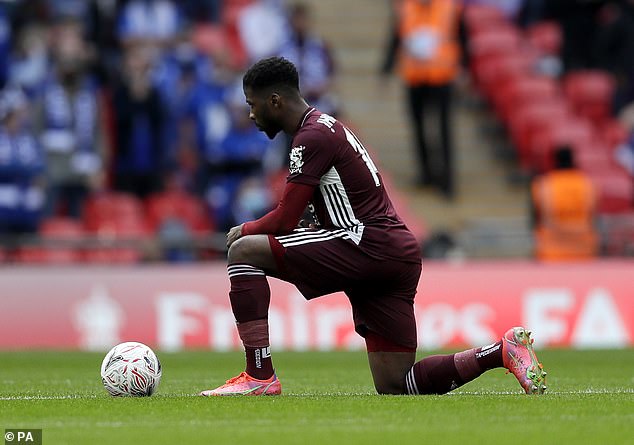 Back in February, Crystal Palace star Wilfried Zaha became the first Premier League player to stop taking the knee and instead chose to stand for the eight-second interval, claiming taking the knee had become ‘degrading’ and had lost all meaning while a number of EFL clubs made the same decision to abandon the gesture.

Zaha explained: ‘There is no right or wrong decision, but, personally, I feel kneeling has just become a part of the pre-match routine.

‘At the moment it doesn’t matter whether we kneel or stand, some of us still continue to receive abuse.

‘I know there is a lot of work being done behind the scenes at the Premier League and other authorities to make change and I fully respect that. I also fully respect my team-mates and players at other clubs who continue to take the knee.

‘As a society, I feel we should be encouraging better education in schools and social media companies should be taking stronger action against people who abuse others online — not just footballers. I now just want to focus on football and enjoy being back playing on the pitch. I will continue to stand tall.’

Speaking on the On the Judy podcast, Zaha said: ‘The whole kneeling down – why must I kneel down for you to show that we matter? Why must I even wear Black Lives Matter on the back of my top to show you that we matter? This is all degrading stuff.

‘When people constantly want to get me to do Black Lives Matter talks and racial talks and I’m like, I’m not doing it just so you can put “Zaha spoke for us”. Like a tick box, basically.

‘I’m not doing any more, because unless things change. I’m not coming to chat to you just for the sake of it, like all the interviews I’ve done. All these platforms – you see what’s happening, you see people making fake accounts to abuse black people constantly, but you don’t change it.

‘So don’t tell me to come and chat about stuff that’s not going to change. Change it. All that stuff that you lot are doing, all these charades mean nothing.’ 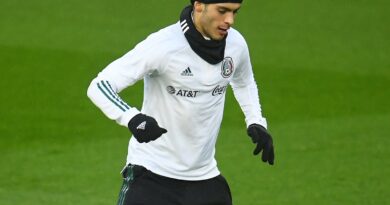 Raul Jimenez could return for Wolves before end of the season, predicts manager Nuno 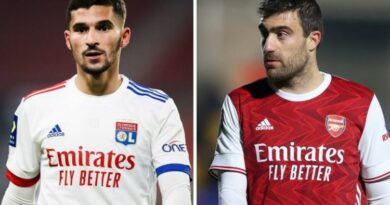