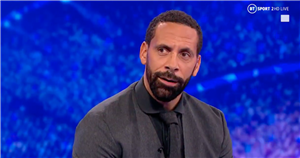 Rio Ferdinand blasted Arsenal for their "waste of money" signing of William Saliba while naming Gabriel Martinelli the club's most promising youngster.

Saliba, 19, finally arrived in north London last summer after the Gunners agreed a £27million fee with Saint-Etienne in July 2019.

The highly-rated defender was immediately loaned back to the Ligue 1 club to continue his development and was tipped to play a major role for Arsenal this season.

But Saliba is yet to make his first-team debut and is set to move back to France in the January transfer window, joining Nice on a deal until the end of the season. Ferdinand, like many onlookers, has been left baffled by the teenager's lack of opportunities under Arsenal boss under Mikel Arteta.

He told his FIVE YouTube channel : "I still think Arsenal need a top centre half, all the problems stem from that.

"You’ve got a great nucleus of young players, there’s seven or eight young players there who everyone is talking about.

"Gabriel has been indifferent. Rob Holding’s playing centre back, what does that say? When you see Holding as the Arsenal captain, you could never imagine that a few years ago."

Did Arsenal waste £27million on William Saliba? Have your say in the comments.

While Saliba is one youngster who is yet to make is mark at the Emirates, 19-year-old Gabriel Martinelli has burst onto the scene.

The Brazilian prospect scored 10 goals last season and has looked bright since returning from injury this campaign, with Ferdinand among his fans.

The former Manchester United defender added: "I think Arsenal have really benefited from investing and believing in young players.

"Without them in this squad, Arsenal would be in even worse shape. Before that they were reliant on [Pierre-Emerick] Aubameyang, who hasn’t produced this season.

"Without these young players coming in and holding the fort, with all that’s going on, I don’t know where Arsenal would be and the fans would be in the doldrums. Martinelli, for me, is the best one."