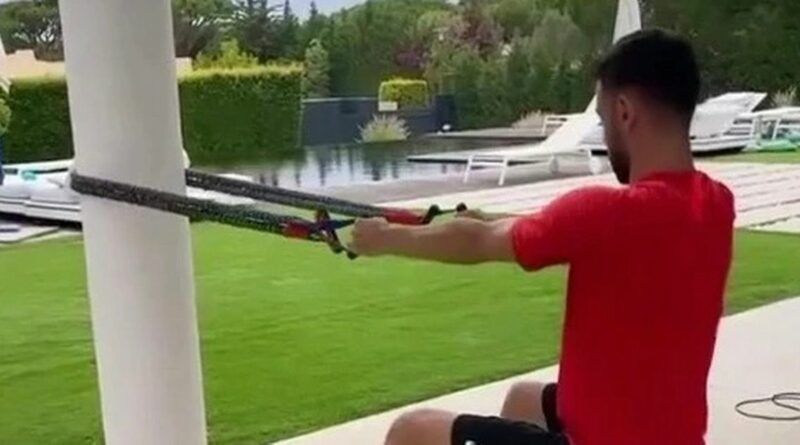 Bruno Fernandes is seemingly out to impress Manchester United manager Erik ten Hag in pre-season after the Portuguese ace was filmed undergoing a gruelling summer workout on social media.

Fernandes, 27, cut a frustrated figure at Old Trafford last term as the Red Devils recorded their worst-ever Premier League points tally. United finished sixth in the top-flight, missing out on Champions League football, and the midfielder is clearly keen to ensure United avoid a repeat of their dismal season in the 2022/23 campaign.

Fernandes was filmed putting in the hard yards with a personal trainer Fabio Cotovio to be in prime shape for the new season on August 7.

The footage, posted by Cotovio, showed the Portugal international working on his chest and triceps with some rope pull-backs around a nearby pole. Fernandes grimaced when hauling back the tight resistance bands whilst enjoying a luxury summer holiday.

United's players have been ordered back in for pre-season on June 27, where Ten Hag will have the first opportunity to assess his squad. Fernandes featured 46 times for the Red Devils last season, missing just two top-flight matches through suspension and illness.

HAVE YOUR SAY! How will Manchester United fare under Erik ten Hag? Let us know in the comments section below

United start the new season at home to Brighton, where Fernandes and co will be out for revenge following their brutal 4-0 thumping in May. "The result is what it is. It is not good enough," Fernandes told reporters following the dismal south coast showing.

"They outplayed us. They always had a solution. Pressed us better and they deserved the result. A little bit of everything [went wrong]. Quality. Mentality. They deserved to win and we deserve to be in the position we are in now. It’s something that we have to look and be embarrassed because that was not good enough from us and we have to do much better."

When pressed further on United supporters chanting ‘you’re not fit to wear the shirt’, Fernandes responded: "I include myself in that. What we did today, what I did today, was not enough to be in a Man Utd shirt and I accept it."

Things we learned: United will challenge for title next season