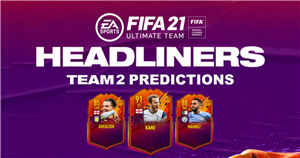 The FIFA 21 Ultimate Team Headliners promo launched last Friday with Team 1, and now the release of Team 2 is almost upon us.

The FUT 21 Headliners promo features special unique dynamic player items that are permanently upgraded with the potential to be further upgraded based on individual and team performances throughout the real-life 2020/21 season. The Headliners promo was first introduced in FIFA 19 Ultimate Team, with players like Paul Pogba, Marcus Rashford and Ousmane Dembele included.

* Click here to subscribe to Level up! The Esports and Gaming Show, the podcast is available on Spreaker, Spotify, Apple Podcasts or wherever you get your podcasts.*

Each FUT 21 Headliners player item released through the promo is one in-form upgrade higher than their latest qualifying performance based In-Form (TOTW, MOTM, Hero or Team of the Group Stage item) or their base item.

But, that's not all. FUT 21 Headliners will also receive an additional one-time permanent upgrade if their club achieves four back to back wins during the remainder of the domestic league season .

If this occurs, the Headliners item will remain two in-forms ahead of their last performance based in-form throughout FUT 21.

It has been confirmed that the FUT 21 Headliners Team 2 will be released at 6pm GMT on Friday January 8, 2021.

So, which players could be included in the FUT 21 Headliners Team 2 squad? Check out the predictions below.

This is just a FUT 21 Headliners Team 2 prediction, so there is no guarantee that any players mentioned below will be included.

*FIFA 21 is out now on Xbox One, PlayStation 4 and PC, with the next generation version of the game set to be released on Xbox Series X, Xbox Series S and PlayStation 5 on December 4, 2020.

Fans can enjoy deeper definition in player physiques, including flexing muscles after strikes and strand-based hair on some of the top footballers, combined with dynamic lighting that accentuates footballers’ faces and kits for a whole new level of realism.

Additionally, fans who jump into FIFA 21 can also benefit from Dual Entitlement, enabling them to upgrade their copy of the game from PlayStation 4 to PlayStation 5, or Xbox One to Xbox Series X/S at no extra cost.*

Conor McGregor wants title shot in next fight despite losing to Dustin Poirier
We and our partners use cookies on this site to improve our service, perform analytics, personalize advertising, measure advertising performance, and remember website preferences.Ok