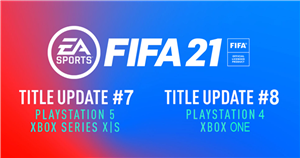 The FIFA 21 Title Update 8 is available now on Xbox One and PS4, with next gen consoles due to receive Title Update 7.

For current gen consoles only, FIFA 21 Title Update 8 will include a change where players will now see their own equipped match ball online, rather than their opponents', something that has been mentioned a lot within the FIFA community.

Other major changes within Title Update 8 include adjustments to the Team Press D-Pad tactic, Stepover and Reverse Step Over skill moves, defender positioning, referee logic and more. There will also be a major visual update included in this patch, with 34 new Starheads and 29 existing Starheads updated, which EA SPORTS say will be activated at a later date through a Server Release.

Click here to subscribe to Level up! The Esports and Gaming Show on Apple Podcasts, Spotify,Google Podcasts and Spreaker.

Made the following changes: