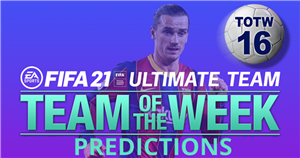 The FUT 21 TOTW 16 lineup could include both Antoine Griezmann and Memphis Depay this week, with no Premier League players featuring.

It's highly likely that no Premier League players will be included in the FIFA 21 Team of the Week 16 lineup, because there have been no Premier League fixtures, with clubs involved in domestic cup action over the past week, which don't count towards TOTW selections.

However with three Premier League fixtures set to take place on Tuesday January 12, including Manchester United vs Burnley, Sheffield United vs Newcastle United and Wolves vs Everton, an exceptional individual performance from one of these games could lead to a late TOTW inclusion. We will update this article to reflect that, if that is the case.

* Click here to subscribe to Level up! The Esports and Gaming Show, the podcast is available on Spreaker, Spotify, Apple Podcasts or wherever you get your podcasts.*

This means that the FUT 21 TOTW 16 lineup is likely to feature FC Barcelona forward Griezmann, who scored twice and registered an assist in Blaugrana's 4-0 win against Granada. Lyon forward Depay also has a good chance of being included, after scoring twice in their 3-2 win against RC Lens.

Borussia Dortmund duo Marco Reus and Jadon Sancho both have a great chance of earning an in-form too, with both registering two goal contributions in their vital win against RB Leipzig. But, despite scoring twice, striker Erling Haaland will not be included in TOTW 16 as he was included in the FUT Headliners Team 2.

Check out our FIFA 21 Ultimate Team TOTW 16 predictions in full below.

The FUT 21 TOTW 16 lineup will be picked on single performances only, so goals and assists are not added cumulatively within the TOTW period.

Also note that performances in domestic cup competitions do not count towards TOTW selection criteria. Only one player from any one team can be included in a TOTW lineup, barring exceptional circumstances.

Also note that players included in either of the last two TOTW lineups are ineligible, as are players who have featured in a recent FUT 21 promo.

This is just a FUT 21 TOTW 16 prediction, so there is no guarantee that any players mentioned below will be included.

The FIFA 21 Ultimate Team TOTW 16 squad is set to be announced at 6pm on Wednesday, January 13 2021, with the cards available in packs from 6pm on the same day.

The EA SPORTS FIFA Team of the Week will be revealed and released into packs at 6pm UK time every Wednesday this season.

Fans who jump into FIFA 21 can also benefit from Dual Entitlement, enabling them to upgrade their copy of the game from PlayStation 4 to PlayStation 5, or Xbox One to Xbox Series X/S at no extra cost.