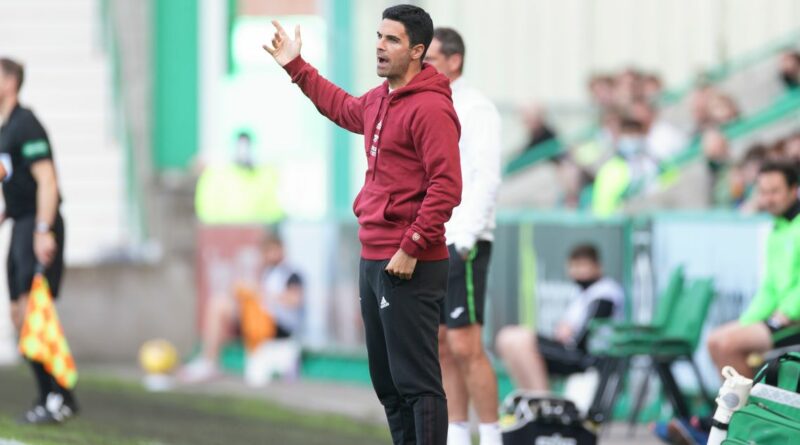 Arsenal boss Mikel Arteta will be scratching his head tonight after watching his side lose 2-0 to Hibernian.

Despite dominating for large portions of the match, it was a case of 'same old Arsenal' after some horror defending and shoddy attack.

The Gunners went 2-0 down to the Scottish side before Emile Smith Rowe grabbed one back.

But attention will now turn to the match against Rangers on Friday night, though Arteta will be aware that not all of his big-name hitters are back in the squad yet.

So, what did we learn as Arsenal toiled against Hibernian up in Scotland?

With the likes of Matteo Guendouzi, Lucas Torreira and Granit Xhaka either leaving or already gone, Arsenal need some midfielders.

Ainsley Maitland-Niles, who is another with his eye on the exit door, prefers to play in midfield rather than at full-back.

But the ex-West Brom loanee was deployed in his favoured position against Hibs.

That suggests that the England international has a future at Arsenal where he replaces one of the outgoing midfielders, potentially saving Arteta some money.

Arsenal’s poor defending from set-pieces appears to still be in full force after some miserable efforts in the second-half.

The loss of David Luiz has left the club bereft of any leadership at the back – while the Brazilian’s own antics hardly screamed confidence in the first place.

This is an issue Arteta must solve immediately.

And did the 19-year-old expect an arm round the shoulder or, at least, time to make up for his error?

No. Arteta did not hang around and hauled him off at half-time, which could have been the plan all along.

Nevertheless, Karl Jakob Hein was brought in at the break as Okonkwo was left to stew on his cock-up.

With the impending departure of Xhaka, there lies a major problem – who will be the new free-kick taker?

And Thomas Partey could be the answer after his thunderous effort in the second-half.

The Ghana international had a brilliant effort smash off the crossbar and could give Arteta a potential solution going into the new season.

Ultimately, this result was a continuation of last season’s antics – a lot of gusto but no end product.

Of course, today was just a friendly but Arteta has plenty of problems still needing answers.

There are several players still away on holiday while incoming transfers such as Ben White and Albert Sambi Lokonga are set to join the squad.

But Arsenal will need to improve on this match’s performance ahead of the Premier League season.