THIS is the terrifying moment dozens of football fans were injured when an overcrowded escalator broke in Rome.

Footage shows crowds of people hurtling into each other after the malfunction at the Repubblica underground station.

#BREAKING: Multiple football fans have reportedly been injured after an escalator breaks at a Subway station in Rome, Italy ahead of the AS Roma and CSKA Moscow game. (Video: @RBWorldorg) pic.twitter.com/qi1OeHSAuE

About 30 people are believed to have been injured during the incident ahead of CSKA Moscow’s Champions League match with Roma.

Russian fans were seen “singing and jumping” on the escalator shortly before it collapsed.

Terrifying screams can be heard as scores of people were sent hurtling towards the bottom.

Some passengers were pulled to safety while others scrambled over the central reservation but many were crushed in the mechanism.

This handout picture taken and released by the Vigili del Fuoco, the Italian fire and rescue service, on October 23, 2018 shows the wreckage of an escalator after it jammed at the underground metro station "Repubblica" in Rome. Picture: Vigili del Fuoco / AFPSource:AFP

Rescuers give assistance to a person who was wounded after an escalator at the "Repubblica" subway station in Rome crashed. Picture: AP Photo/Alessandra TarantinoSource:AP

Part of one victim’s foot was cut off in the incident, according to La Repubblica.

Six people are seriously injured and more than 100 firefighters have been scrambled to the station.

Dmitry Gurin, of the Russian embassy, claimed that 30 travelling fans were injured, with 17 taken to hospital.

“A group of CSKA fans were going down into the station. At that moment the escalator collapsed,” a police spokesman told Russian news agency RIA.

Before the Roma vs CSKA Moscow match at one of the central metro station the escalator with CSKA fans was out of order. Many Russians are injured. pic.twitter.com/1QqfuIrhqa

One photo shared on social media appears to show blood and broken metal at the bottom of the malfunctioning escalator.

Meanwhile, a Russian fan was stabbed during clashes between fans near the Stadio Olimpico.

This story originally appeared on The Sun 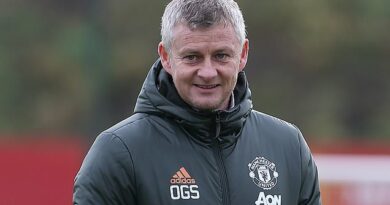 Solskjaer: Man Utd haven't got 'carried away' since 9-0 win vs Saints