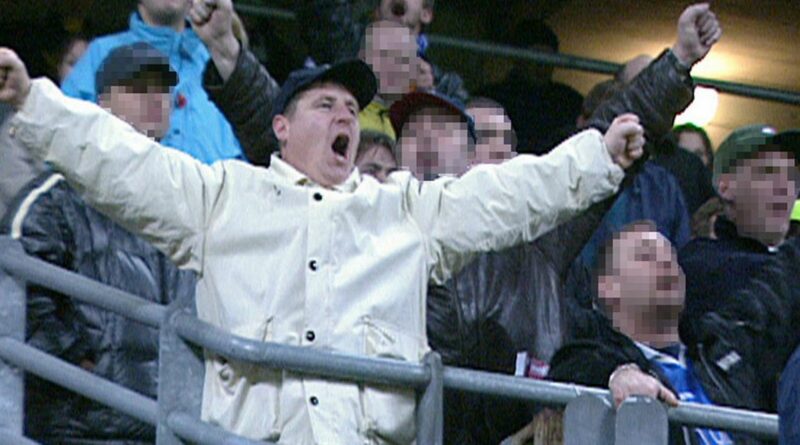 Britain's most infamous football hooligan who defied the family of Lee Rigby with a mural of the murdered soldier in his shop in Thailand has a history of sickening far right links – and even boasted of Nazi salutes while visiting Auschwitz.

English football hooliganism has long been a stain on the beautiful game on these shores – and a landmark documentary revealed the dark and brutal side of Chelsea's fanbase at the turn of the century.

The 'casual movement' kicked off in the UK in the 1960s. Supporters known for wearing expensive designer gear and forming hooligan groups known as 'firms' met up to fight before and after games, as British police tried in vain to curtail the wave of organised violence.

But when journalist Donal MacIntyre set about infiltrating the Chelsea Headhunters in an undercover sting for a 1999 documentary, he found there was also a fascist wing of the notorious crew, whose 'top boys' included Jason Marriner.

Known as 'the General', Marriner had been a hooligan since his teens and became one of the most feared men across British terraces. The owner of a tyre-fitting firm, Marriner, who has now created a new life for himself in Thailand and opened his own ex-pat shop, lived for the "fun" of violence, whether it was at home or following England across Europe.

What do you think of hooliganism in the English game? Let us know in the comments section

Coupled with the skinhead movement, Chelsea's firm was originally called the Shed Boys. By the 1990s, they had evolved into the Chelsea Headhunters, with Marriner and another thug, Andy Frain, who was nicknamed 'Nightmare', at the heart of the gang.

Police already had the duo on their radar when Macintyre started to produce his tell-all BBC documentary. Some members of the group had previously been arrested in a police sting in 1986, when tales emerged of how rival fans were left seriously wounded and unconscious with 'calling cards' which said "you have been nominated and dealt with by the Chelsea Headhunters".

Yet when MacIntyre threw himself into the sinister underbelly of football, he found there were also vile racist and neo-Nazi tendencies within the Chelsea Headhunters, with links to white supremacist groups such as Combat 18 and the National Front, and affiliations to Northern Irish loyalist paramilitary organisations, like the Ulster Volunteer Force (UVF).

The award-winning journalist committed to his role: he passed out while getting a Chelsea tattoo, rented out an expensive Mercedes, and even moved into a flat above tyre-fitter Marriner's home. His aim was to befriend Marriner, and he was eventually welcomed into the then 31-year-old's inner circle.

It was the first trip away – a European clash with FC Kobenhavn – that left a chilling imprint on MacIntyre. The documentary shows how after listening to the Headhunters singing anti-Jewish songs in a pub, MacIntyre stuck close to Marriner at the Parken Stadium, hoping to let other fans know they were close and that he was one of them.

The journalist witnessed Marriner throwing up Nazi salutes at the stewards, and commented that Marriner was "trying to start trouble". Ultimately, it kicked off between the fans after the game, and MacIntyre came home with bruises, after being punched and kicked.

In perhaps the most sickening moment of the documentary, Marriner was caught joking in a pub about the time he and Frain took a trip to Auschwitz, the German Nazi concentration camp in Poland where thousands of Jewish people were killed during the Second World War, where he took pictures of Frain making Nazi salutes.

Laughing, Marriner recalled how "a Polish geezer started crying", and that it was "absolutely superb", before adding: "I think I put the final nail in the coffin when I tried to get in the oven."

Gerry Gable, of Searchlight anti-fascist magazine, told the documentary how he had received a postcard, which was marked 'Combat 18 Headhunters Division', with the sick message: "Wish you were here, we've just dug up the bones of your grandmother and p***ed all over them."

MacIntyre had witnessed Marriner's far-right tendencies and racist slurs made in his car toward black and asian people first-hand, and it wasn't long before he had established links between him and hate groups Combat 18 and the National Front. At the end of the eye-opening film, MacIntyre found himself with Frain, Marriner, and a younger hooligan he also got to know during his time undercover in London.

The Headhunters were preparing to ambush a peaceful march commemorating Bloody Sunday – one of the darkest moments during The Troubles in Northern Ireland, when 14 Catholics were shot dead. Intent on violence, Marriner and his mates had linked up with Combat 18 to target those on the march. It was here MacIntyre caught footage of Marriner side-by-side with the leader of the neo-Nazi terrorist organisation, before police intercepted the yobs.

The documentary aired shortly afterwards, and while Marriner was still a free man at the time of its airing, he was soon behind bars. In the programme, Marriner had revealed dark deeds, and recorded Frain in the back of his car bragging and laughing about having "a pocketful of Ku Klux Klan calling cards" and 'slashing' an off-duty policeman across the throat.

In November 2000, the two men, described as "generals" in the Headhunters, went on trial at London's Blackfriars Crown Court. They denied conspiracy to commit violent disorder and affray – allegations relating to a trip they made with MacIntyre to an away game against Leicester City, at which trouble had been prearranged, and the Bloody Sunday march.

Marriner argued he'd only told MacIntyre what he wanted to hear and was making his boasts up. He denied being a member of a racist organisation or being racist, and claimed his political views stretched no further than admiration for the Queen and telling people to be quiet when the National Anthem was played. Frain, then 36, didn't give evidence, but the court heard he was a member of the Ku Klux Klan, holding the title of Grand Knight Hawk.

Both men were found guilty of the charges. Marriner was given six years behind bars, while Frain – who had previous convictions including distributing racist literature – was jailed for seven years. Judge Charles Byers said: "It's clear to me that you relish violence and will stop at nothing to go anywhere in pursuit of it, showing little, if any, regard for other people or for the law."

MacIntyre was warned by a police officer when making his programme that the people whose criminal network he had infiltrated "have long memories". That proved to be all too true when 10 years later in 2009 he was attacked, along with his wife, and knocked unconscious at a wine bar in Surrey. A court heard a gang of thugs – one of whom berated MacIntyre for his role in helping to jail Marriner – attacked them like "a pack of wolves" in revenge for the undercover sting.

The Chelsea Headhunters website claimed the MacIntyre documentary "was completely manipulated by its executive TV producers, to gain more viewers". And in Marriner appeared in his own documentary, telling his side of the story. But both he and Frain were soon back behind bars.

Trouble erupted on the streets of west London in 2010 when the Headhunters fought Cardiff City's Soul Crew after an FA Cup fifth round match between Chelsea and the Welsh side. CCTV footage showed innocent fans including a dad shielding his two children as missiles flew over their heads. Bricks were thrown at police and one officer had his jaw broken and lost four teeth after being hit in the face with a rock.

Dad-of-three Marriner, then 43, was jailed for two years and banned from football grounds for eight years in March 2011, after being found guilty of violent disorder and having played a "pivotal role" in the chaos. Frain, then 47, admitted the same charge and was jailed for 22 months in July 2011.

After leaving prison, Marriner talked about renouncing violence and released three books. But when he appeared on ITV's This Morning and defended English fans' violence during Euro 2016, both Holly Willoughby and Phillip Schofield were left unimpressed, while viewers mocked his claim that "we come from a fighting country, it's naturally in your blood".

In 2018, Marriner was said to have taken part in a UVF parade in Belfast, supporting the Ulster loyalist paramilitary group. Some UVF volunteers were said to be "fuming" over his attendance, given the Headhunters' history of far right politics. After the parade, ahead of the Celtic and Rangers Old Firm game, Marriner posted a picture of a watch with the caption "time for some Bigotry" and wrote "up the Gers".

He was criticised again last week, after a video he posted of his English food shop in southeast Asia went viral. It displayed a chest freezer in his store, bearing an image of Fusilier Lee Rigby – the British Army soldier who was murdered by Muslim extremists in May 2013 – with a message which appeared to read: "Murdered by Islam on a British street. Forgotten by the media. By the political elite. BUT NOT BY THE PUBLIC."

Marriner told the camera: "We don't forget Lee Rigby, ey, we don't mess about on this firm son, you know what I mean." Lee Rigby's family have previously urged people not to use his name or image in a "divisive" way.

In June 2020, in response to his picture being included in social media posts fuelling arguments against the Black Lives Matter protests, his mum Lyn Rigby said seeing "his image used to cause hate of any kind" hurt her family, as "Lee proudly served his country to protect the rights and freedoms of all members of this great melting pot of a nation".

Mrs Rigby added: "We find these posts extremely heartbreaking and distressing, and in complete opposition to what Lee stood for. We ask you all to please stop using his image and memory in such posts as he was a lover of all humanity. Every race, gender, creed, sexuality and colour. So seeing such use of his name harms not only his family but his legacy and memory."

Unfazed by criticism of his murals online, Marriner responded in another video: "They hide behind their little keyboards, got plenty to say, you know what I mean? Whatever. They're jealous and bitter people."

In a further clip replying to his "haters" he showed another picture of Lee Rigby on the wall of his shop, next to one of Sir Tom Moore, and ranted: "Is that alright? Are we allowed to do that? Is that alright, you know, in my place?"

When contacted by Daily Star Sport and asked whether there was anything he wanted to say about the reaction to the video and criticism of him using the image of Lee Rigby, Marriner replied: "Yes I’d like to say have you mentioned the murals of Sir Tom Moore? The Queen? Chelsea pensioner Colin Thackery that served our country well, God bless them oh and also HOW Lee Rigby was taken from our streets?

"NO I didn't think so, so keep printing your boring s*** have a nice day!" He added "wish you was here", with emojis of a desert island and a smiling face wearing sunglasses, before posting another video, in which he criticised newspaper coverage and said: "Not allowed to have a view? Well I can, so up yours." 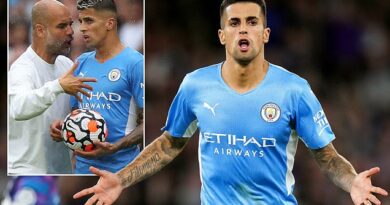 Luis Suarez’s goal drought away from home stretches to over 1,300 DAYS