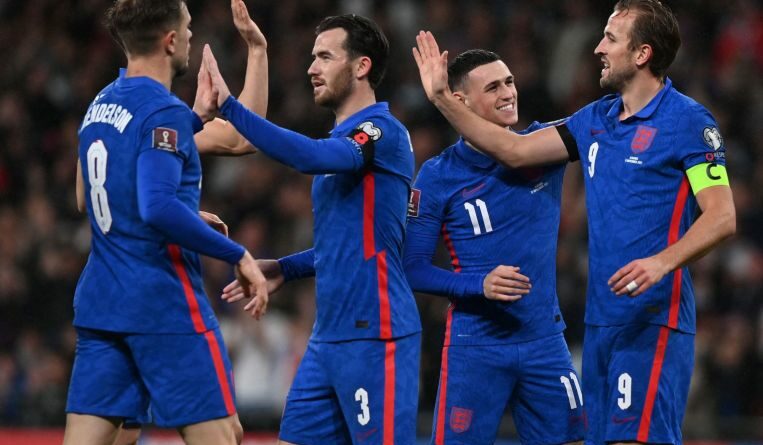 LONDON (AFP) – Harry Kane scored a first half hat-trick as England romped towards the 2022 World Cup with a 5-0 thrashing of Albania, but Italy still have work to do to reach Qatar after a 1-1 draw with Switzerland.

England still need a point to mathematically qualify when they visit San Marino on Monday, but boast a three-point lead and six-goal advantage on goal difference over Poland, who sealed at least a playoff place with a 4-1 win over 10-man Andorra.

The Three Lions can look ahead to Qatar with confidence as they bounced back to form at Wembley in style after a disappointing 1-1 draw at home to Hungary last month.

Harry Maguire put a difficult start to the season at club level behind him as the Manchester United captain opened the floodgates with a thumping header from Reece James’ free-kick.

Kane admitted on Thursday to also struggling physically and mentally from the exertions of England’s run to the Euro 2020 final added to the speculation over his future.

The England captain has scored just one Premier League goal this season, but now has six in five games for his country.

England were rampant in the first 45 minutes as Kane thrashed home his second from a narrow angle before completing his fourth international hat-trick in spectacular fashion with a scissor kick from Phil Foden’s corner.

Kane is now level with Jimmy Greaves as England’s fourth highest goalscorer of all time on 44 and moved ahead of Wayne Rooney with the most competitive goals for the Three Lions.

European champions Italy maintained a narrow advantage over Switzerland at the top of Group C, but missed a glorious late chance to virtually secure qualification when Jorginho blazed a penalty over the bar.

The visitors got off to a flying start in Rome when Silvan Widmer’s thunderous strike flew into the top corner.

The Azzurri levelled nine minutes before half-time thanks to a well-worked set-piece that was headed in by Giovanni Di Lorenzo.

Italy were given a controversial late spot-kick after a VAR review for a push on Domenico Berrardi by Ulisses Garcia.

Jorginho also missed from the spot when the sides drew 0-0 in September and fired well off target.

Italy hold a two-goal advantage over the Swiss on goal difference heading into Sunday’s final games.

Scotland guaranteed a playoff place behind already-qualified Denmark in Group F with a comfortable 2-0 win in Moldova.

Nathan Patterson and Che Adams either side of half-time as Steve Clarke’s men secured a fifth consecutive win.

Denmark beat the Faroe Islands 3-1 to maintain their 100 per cent record.