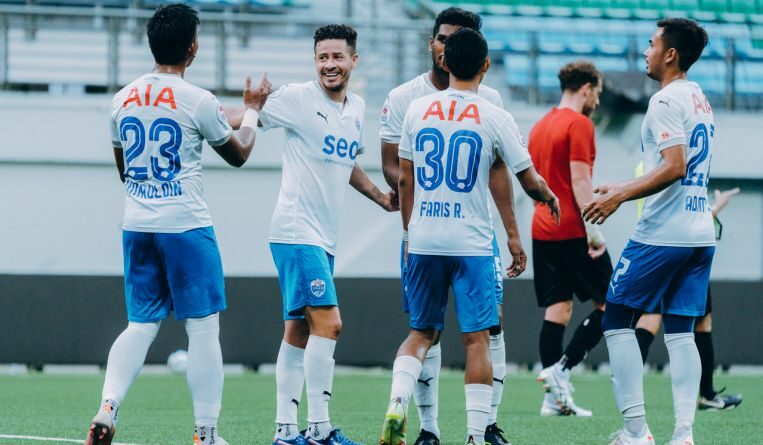 SINGAPORE – On a thrilling final day of the season, big-spending Lion City Sailors have won their first Singapore Premier League (SPL) championship in their second season as a privatised club after beating Balestier Khalsa 4-1 at Jalan Besar on Sunday (Oct 10), as they look forward to greater achievements.

This is the first time a local club has won the SPL since Warriors FC were champions in 2014. Since then, Albirex Niigata had won the championship four times and Brunei DPMM twice.

After 21 games, they have 48 points, two more than deposed champions Albirex, who were held to a 4-4 draw by Tanjong Pagar United at Jurong East.

In front of a maximum 1,000 spectators allowed under the Covid-19 safe management measures, the Sailors took an eighth-minute lead through Song Ui-young, but were made to sweat after Aidil Johari equalised in the 31st minute.

Even though Gabriel Quak pounced from close range 10 minutes later to make it 2-1 to the Sailors, there was still an element of uncertainty as Albirex were leading Tanjong Pagar 4-1 at half-time.

But late goals from $2.9 million signing Diego Lopes (78th minute) and Quak (81st) settled the frazzled nerves even if Adam Swandi was sent off for a second yellow card in the 86th minute.

Sailors coach Kim Do-hoon recognised how his team have done their job to score the necessary goals even as he worked on tightening the defence in a 10-match unbeaten run since his first match in charge in July.

He said: “Going forward, this team are blessed with options and the ability to score important goals was key. Defensively, we are largely sound. Even though we may have conceded one or two late goals, there is a much better defensive solidarity now than when I first took over.

“Coming in mid-way into the season, I had a time crunch to get the players used to how I do things. Nevertheless, they have largely responded well and have put in the extra work to adapt.”

And now, they can dream of achieving bigger things on a higher, continental level.

Sailors chairman Forrest Li wrote in his matchday programme notes: “We know that football is a results business. On-field success is the most obvious marker of whether we are indeed making positive moves to stay on the right track and improve as much, and as fast, as we want to.

“We understand, we will not achieve all our goals overnight, but we aim to keep moving forward as quickly as we can, because the change we dream of is not just within our club, but across Singapore football.”