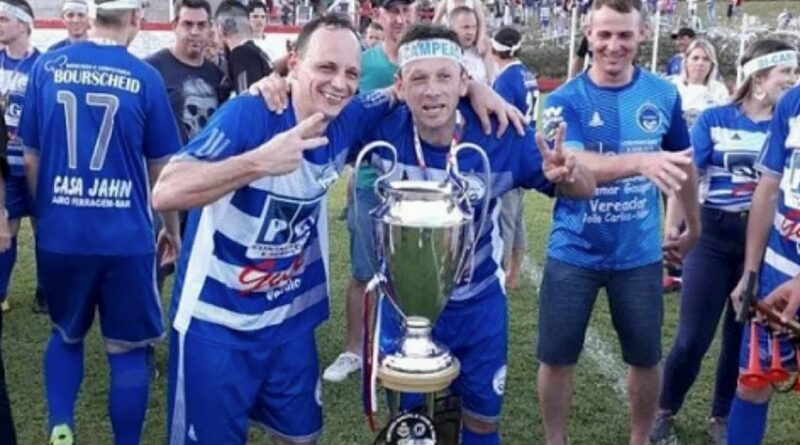 A footballer has died after receiving a flying kick to the chest from an opponent during a friendly match in Brazil.

Father-of-one Geovani Biancho, 42, lost his fight for life shortly after being rushed to hospital.

An unnamed 21-year-old has been questioned by police but released on bail pending an ongoing criminal investigation because he wasn't caught "red-handed."

Local reports say he has confessed to the assault but claimed he “lost his head” in a moment of madness.

Amateur player Biancho, who leaves a wife and a three-year-old son, was attacked on Saturday during a friendly match near the city of Carlos Barbosa in the southern Brazilian state of Rio Grande do Sul.

He was playing for a team called Torinense Recreational and Cultural Sporting Club.

A witness has reportedly told police he got into an argument with a player from the other side after committing a foul but claimed the aggressor was a third man who hit him in the chest with a flying kick.

The unnamed witness told a local paper: “We thought he was going to separate the two men including the victim who were arguing but instead he ran up to him and delivered a flying kick.”

Geovani’s teammates assisted him after he started convulsing on the ground and an ambulance was called but he was pronounced dead just before midnight the same day.

The attacker is said to have fled the scene before being apprehended.

The dead man was buried on Sunday following a wake.

A regional cup final that was due to take place the same day was postponed until December 19.

In October a Brazilian footballer was charged with attempted murder after he was filmed brutally kicking a referee in the head in a game in the south of the country.

The player, William Ribeiro of Sport Club São Paulo, attacked the referee after he awarded a foul against him during a league game away against Guarani.

The game was halted for nearly 15 minutes while the referee, Rodrigo Crivellaro, was taken to hospital. He was later released.

Video footage from the match showed how Ribeiro booted Crivellaro to the ground before taking another horrible kick to his head as the ref lay helplessly on the ground.

MURPHY: I am so proud I had a chance to play part in England history