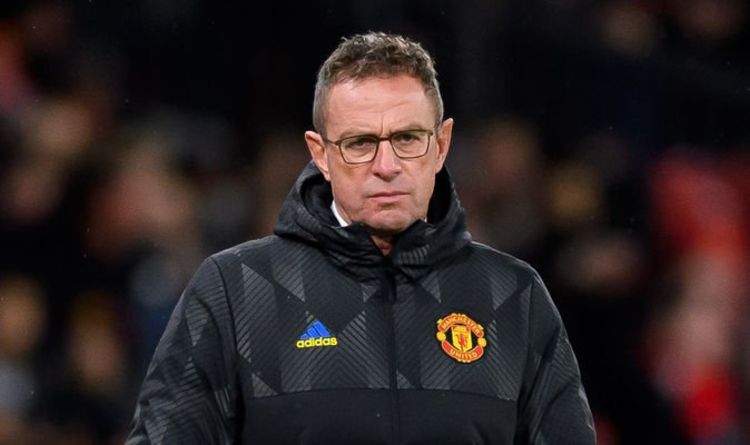 Manchester United boss Ralf Rangnick is believed to be drawing up plans to sign a tall midfielder, with 6ft 4ins Nemanja Matic playing a less active role in the squad as he ventures deeper into his thirties and Paul Pogba threatening to see out his contract. While some of Europe’s premium names may not be available over the coming weeks, Express Sport looks at four candidates who the German could look towards during what could be his first of many transfer windows at Old Trafford.

United have been linked with the 6ft 3ins Serbian for what seems like an eternity.

Still just 26 years old, the Lazio midfielder burst onto the scene as a youngster which attracted plenty of interest, and after a few steady but solid seasons in Rome, he could now be more financially attainable.

This campaign, he has already notched five goals and six assists in Serie A as Lazio attempt to close the gap on the division’s high-flyers.

Reports of a rift between Milinkovic-Savic and manager Maurizio Sarri could give the Red Devils hope, but the Italian categorically denied the rumours, meaning United may have to shell out all of his reported £67million price tag.

Although not quite as rangy as his Lazio counterpart, Kessie is one of the most exciting midfielders in the shop window this January.

Just clear of the 6ft mark, the Ivorian has already notched five Serie A goals this campaign, including a first-half brace against Empoli last time out.

His goal-scoring prowess and physicality in the middle of the park have alerted numerous top clubs, and his ongoing contract standoff with AC Milan provides genuine hope of a move.

It would reportedly take a contract offer in the region of £150,000-a-week to tempt the 25-year-old, but with other interested parties sure to be sniffing around, Rangnick and co would be wise to act quickly.

The young midfielder has kicked on again after a strong breakout campaign last time out, and he is currently one of the first names on the team sheet at Monaco.

He has also bolstered his reputation via strong showings for the French national team, with seven senior caps already to his name in a competitive squad, including a great performance in October’s UEFA Nations League final.

Chelsea reportedly turned down the opportunity to swoop for Tchouameni during the summer because of his relative inexperience.

And the Red Devils could make them pay for that decision by officially joining the hunt, with a fee in the region of £40million reportedly attached to the 6ft 2in star.

Having broken through with Marseille as a teenager, Europe’s top clubs are on high alert in light of Kamara’s current contract standoff.

Well into the final year of his deal, the midfielder can enter pre-contract negotiations with United in January, unless Marseille wanted to cash in straight away.

The latter approach could hand Rangnick the opportunity to work with the 6ft 22-year-old who has shown plenty of potential thus far.

And French outlet L’Equipe have already tipped the deal to go ahead.

EFL clubs have been given no support, says Aaron McLean after leaving role as Peterborough coach