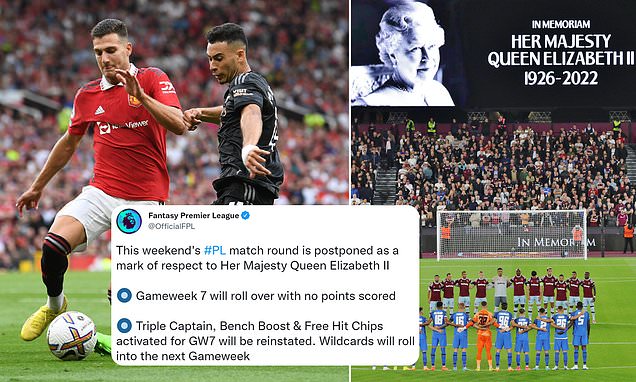 Fantasy Premier League (FPL) has announced that Gameweek 7 will be rolled over with no points scored, following the cancellation of Premier League fixtures due to the passing of Queen Elizabeth II.

Sporting bodies were allowed to decide whether they would continue with sporting events this weekend or not, although the chair of the DCMS Select Committee Julian Knight did tell TalkSPORT that no sporting events should take place out of respect.

The Premier League opted to suspend this weekend’s fixtures to honour the Queen’s ‘extraordinary life and contribution to the nation’. 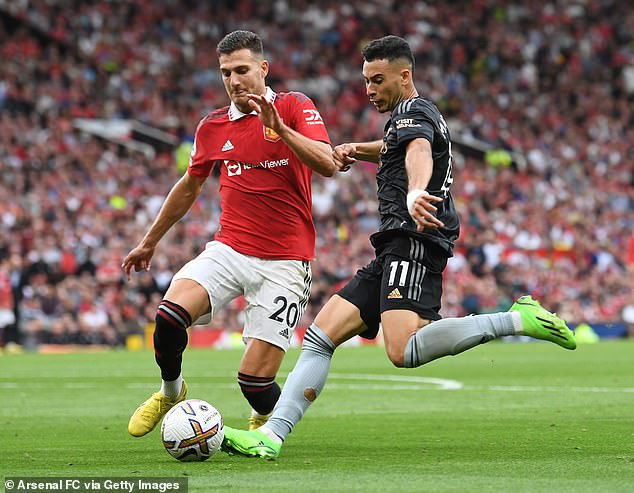 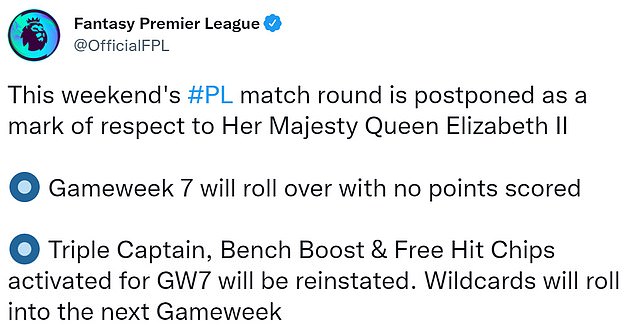 A statement released by FPL on Twitter said: ‘Gameweek 7 will roll over with no points scored.

‘Triple Captain, Bench Boost & Free Hit Chips activated for GW7 will be reinstated. Wildcards will roll into the next Gameweek.

‘For managers who took a points hit for additional transfers, their scores will reflect the points they lost. 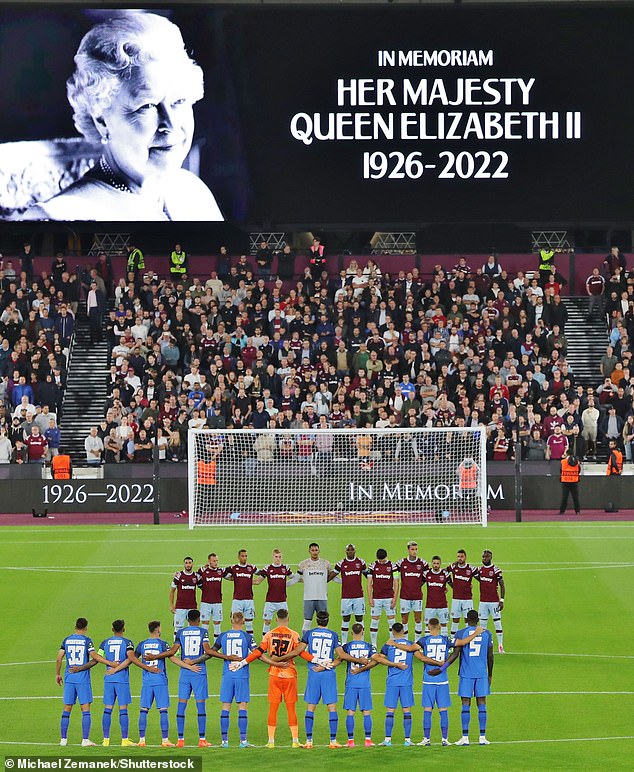 ‘In H2H league matches, if neither manager made transfers incurring points deductions that Gameweek, then the matches will be drawn & managers will earn one point each.

‘Postponed fixtures will be allocated to another date. Points scored in these fixtures will apply to the Gameweek in which the fixtures are played and not to Gameweek 7 These are exceptional circumstances, and we appreciate the understanding of FPL managers while the situation evolves.’

The EFL, SPFL and FA have also called off games this weekend, although Manchester United and West Ham did take part in European games on Thursday night following pre-match tributes.

WHICH SPORTING EVENTS HAVE BEEN AFFECTED FOLLOWING THE DEATH OF THE QUEEN?

The Premier League have announced that all of this weekend’s matches have been postponed to honour Queen Elizabeth II following her death at the age of 96 on Thursday.

The FA confirmed all football across the country would also be called off, including the EFL and opening games of the new WSL season, as well as matches in the Barclay’s Women’s Championship, Women’s FA Cup and the FA Trophy.

The National League has also cancelled their programme of fixtures for Saturday and Sunday across steps one to six and grassroots football matches in England have also been postponed to mark the death of the Queen.

The Government earlier advised that no sporting events should go ahead this weekend – or on the day of the Queen’s funeral – but left the final decision up to the individual organisations.

The Scottish FA, Scottish Professional Football League, Scottish Women’s Premier League and Highland & Lowland Leagues have agreed that all professional football matches will be postponed this weekend as a mark of respect.

FA Wales have announced that games from the 9th to the 12th of September have been postponed.

Manchester United’s Europa League clash with Real Sociedad at Old Trafford and West Ham’s game against FCSB in the Europa Conference League at the London Stadium went ahead on Thursday evening with pre-match tributes.

The Northern Ireland Football League announced that Friday night’s matches between Cliftonville and Glentoran and Larne and Dungannon have been postponed.

The English Football League also confirmed that Friday night’s Championship game between Burnley and Norwich and the League Two match between Tranmere and Stockport had been postponed, with a decision on Saturday’s fixtures yet to be made.

The Irish FA has announced that all football in Northern Ireland scheduled for this weekend will not take place.

All of the Premier League 2 fixtures have been cancelled, as well as the Championship match between Burnley and Norwich.

Friday’s play between England and South Africa men at The Oval, along with all scheduled matches in the Rachael Heyhoe Flint Trophy, will not take place.

The England and Wales Cricket Board announced on Friday that all cricket would resume on Saturday – including England’s Test against South Africa and England Women’s T20 match against India.

Northampton announced the postponement of their Premiership Rugby Cup clash against Saracens scheduled for Thursday evening.

The Scottish Rugby Union has postponed all domestic competitive games this weekend as a mark of respect and the women’s summer Test international between Scotland and Spain on Sunday is also off.

Bristol Bears against Bath Rugby has been postponed from Friday evening to a 5.30pm kick-off on Saturday, following the decision of the Premiership board. The rest of the Saturday Premiership Rugby matches will go ahead.

The RFL postponed Friday’s Betfred Championship fixture between Sheffield Eagles and Dewsbury Rams, but the first Super League elimination play-off between Catalans Dragons and Leeds will go ahead as it is taking place in Perpignan, France.

Further announcements about the weekend’s fixtures at all levels were set to be made ‘as soon as possible’, the governing body said.

Play was suspended for the day at the BMW PGA Championship and there will be no play on Friday.

However, organisers later revealed they are planning to restart at Wentworth this weekend, awaiting guidance from Buckingham Palace.

Sunday’s Italian Grand Prix will go ahead as scheduled with a minute’s silence planned before practice on Friday and another expected before the race.

The British Boxing Board of Control (BBBofC) stated that all fights on Friday would not go ahead as planned.

The undisputed middleweight showdown between Claressa Shields and Savannah Marshall at the 02 Arena has been postponed until October 15.

The US Open held a brief tribute to the Queen during the women’s semi-finals on Thursday night in New York. With Brits Joe Salisbury and Neal Skupski on either side of the net for the men’s double’s final on Friday, the pair are expected to wear black armbands to mark the Queen’s passing.

Horse racing was a much loved passion of the Queen. Events were cancelled for Friday and Saturday, while evening cards at Southwell and Chelmsford on Thursday were abandoned after the news of her death was confirmed around 6.30pm.

On Sunday, racing returns, led with the St Leger in a revised nine-race programme at Doncaster racecourse.

Sunday’s card at Chepstow in Wales will also proceed as normal, but Musselburgh in Scotland has been cancelled because the Queen’s body will be lying in rest in Edinburgh.

The Queen’s horse King’s Lynn has not been declared for the Al Basti Equiworld, Dubai Flying Five Stakes at the Curragh, Ireland, on Sunday, after being initially entered.

The Great North Run, the world’s largest half-marathon, will go ahead on Sunday. Organisers cancelled its 5k sister event on Friday.

Richmond RUN-FEST has been postponed, because their route would take runners through two locations owned in part by Historic Royal Palaces and a floral tribute to Elizabeth in the Royal Borough’s Old Deer Park.

Friday’s Tour of Britain stage was promptly cancelled and later on Thursday evening the rest of the tour, which was set to finish on the Isle of Wight on Sunday, was called off entirely.

Premier Sports Elite League Ice Hockey will begin tonight as previously planned, following a board meeting. Fixtures will start with a two-minute silence for the Queen, followed by the playing of the national anthem. 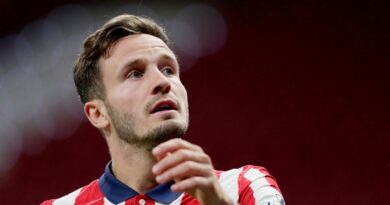