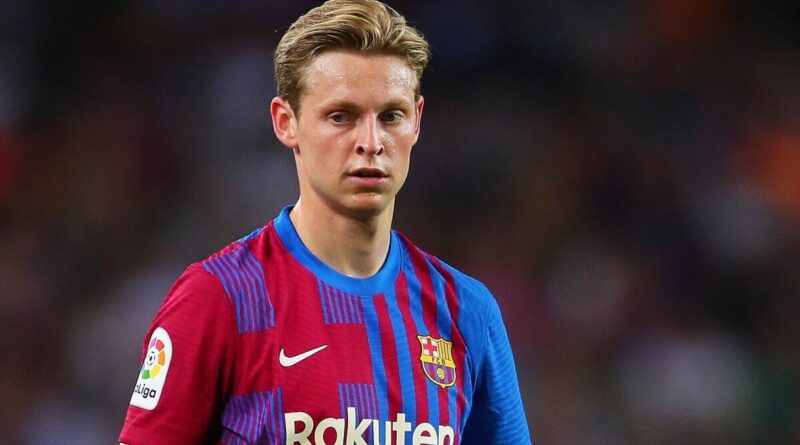 Frenkie de Jong has been handed another incentive to join Manchester United following the news that Barcelona will reportedly slash his wages should he continue with the cash-strapped Catalan club into next season. The Dutchman is one of a number of Barcelona players being targeted for a wage cut by the Spanish giants who continue to find themselves crippled by a financial crisis.

Barcelona’s economic vice president, Eduard Romeu, announced last week that a £427million investment was required in order to “save” the club as all manner of cost-cutting measures are being explored. One such notion is that significant savings can be made if the Blaugrana enforce further wage cuts to their squad – an action which was also taken last summer.

The club’s quartet of captains, Gerard Pique, Jordi Alba, Sergio Busquets and Sergi Roberto, are understood to be the focus of the money-saving strategy, but the rest are the squad are by no means exempt. According to Mundo Deportivo, Barcelona are also aiming to hold discussions with United target De Jong, with a view to re-negotiating his current wage, should he remain at the club this summer.

The 25-year-old joined the La Liga side back in January of 2019 in a £65m deal from Ajax and is understood to be one of Barcelona’s highest earners. It was reported earlier in the year that the midfielder was willing to waive a mammoth £6m in unpaid wages.

News of Barcelona’s continued monetary struggles, and De Jong being dealt a further financial setback, will serve as a significant boost to United. New Red Devils manager Erik ten Hag is understood to have identified the Dutch midfielder as one of his top targets as he seeks to reunite with his former Ajax protege at Old Trafford this summer.

United are continuing to close in on a deal to sign De Jong, despite his initial reluctance to leave Catalonia. The midfielder was thought to be keen on remaining with Barcelona, however the club’s desire to offload him this summer in order to raise funds is believed to have altered De Jong’s stance.

A bid worth £65m, the same figure Barcelona paid to Ajax for the midfielder back in 2019, is anticipated to be enough to strike a deal. As reported by the Telegraph, personal terms ‘won’t be a problem’ with United expected to make De Jong one of Old Trafford’s highest earners.

Following the Netherlands 2-2 Nations League draw with Poland on Sunday, De Jong laughed off suggestions he was set for an imminent move to United. When asked whether he was on the verge of swapping the sunny climes of Barcelona for cold ones of Manchester, the Dutch international chuckled before telling TVP Sport: “I can’t say anything.”

Women’s World Cup 2019 England fixtures: When is England’s next game after Japan tonight?