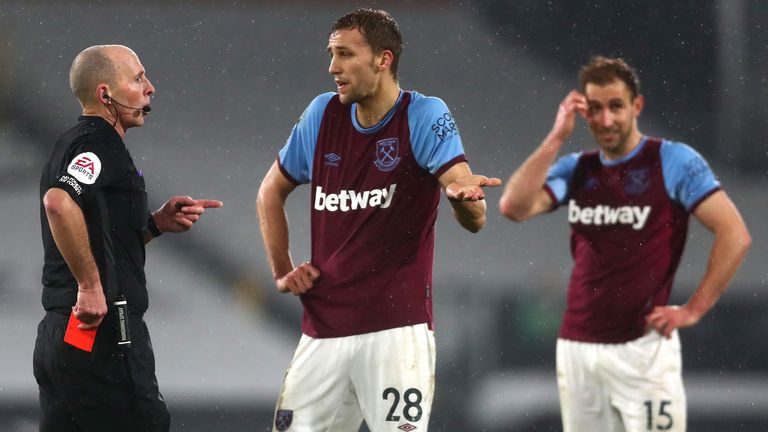 West Ham missed the chance to move into the top four with a 0-0 draw at Fulham which was marred by Tomas Soucek’s contentious late red card.

A sixth Premier League win in seven would have lifted David Moyes’ in-form side above Liverpool into the Champions League places, but the Hammers were uncharacteristically passive, registering just a single shot on target at Craven Cottage.

Things took a turn for the worse deep into stoppage-time when influential midfielder Soucek was sent off by referee Mike Dean after a lengthy VAR review for an unintentional elbow on Fulham striker Aleksandar Mitrovic.

Fulham’s commitment towards securing what would have been only their third Premier League win of the season could not be faulted, but it was familiar tale for Scott Parker’s goal-shy side as their winless run stretched to 12 games.

Fulham stay 18th in the table, eight points from safety, after their ninth draw of the season, while West Ham stay fifth, a point outside the top four. Fulham started brightly, with Ademola Lookman keen to prove a point after his infamous failed Panenka penalty in the reverse fixture at the London Stadium.

But the first clear opening fell for West Ham, with the returning Jarrod Bowen coming within inches of getting on the end of a teasing Aaron Cresswell cross.

The better chances continued to come West Ham’s way, with Declan Rice drawing Fulham goalkeeper Alphonse Areola into a save at his near post, before Jesse Lingard’s floated cross picked out the prolific Soucek, but he headed a gilt-edged opening over while under pressure from Mario Lemina.

It took Fulham 42 minutes to register their first attempt on target, with Ivan Cavaleiro’s near-post header straight at Lukasz Fabianski.

At the start of the second half, Fulham captain Joachim Andersen found Bobby Decordova-Reid but his volley went over the bar, before Ruben Loftus-Cheek chipped a glorious opening into the side-netting moments later.

The crossbar prevented Vladimir Coufal heading West Ham in front of 63 minutes after he climbed high to meet Declan Rice’s cross and saw a thunderous effort cannon back off the woodwork.

Parker introduced Mitrovic soon after and the Serbian nearly produced an instant impact with a low drive which flashes agonisingly wide of the far corner.

West Ham were reduced to 10 men in the dying stages when Soucek fell foul of a VAR intervention, leaving the Hammers without the Czech midfielder for the next three games of their European push.

“Mike Dean has had so many years officiating, and he thinks he’s meant to do that?

“This is why people get so frustrated when people watch football now, when they see things like that. It goes away from what we love about the game.

“The fact that Mike Dean went over there and though it was a red card is a genuinely worry for me.”

Mourinho to be handed eye-watering January warchest at Man Utd