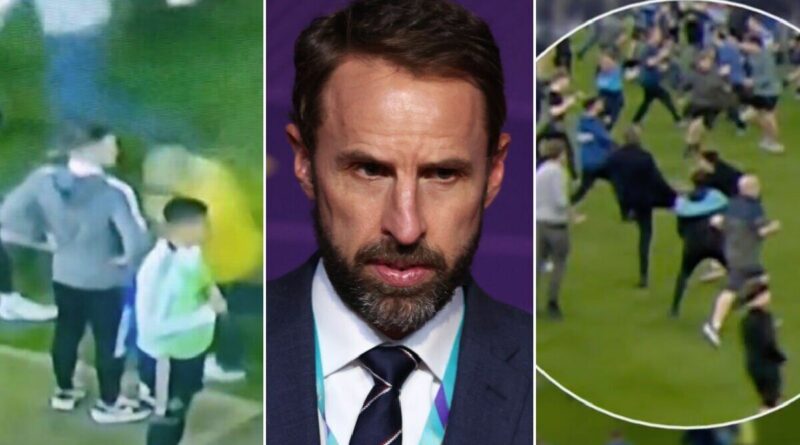 Gareth Southgate has said he is “embarrassed” by English football fans right now – embarrassed at recent pitch invasions; embarrased at having to play behind closed doors; embarrassed by what might go on in Germany next month. Moreover he fears that if behaviour does not improve it could scupper the bid of the home nations and Ireland to host Euro 2028.

England have already been forced to play their next home game against Italy on June 11 behind closed doors at Molineux because of behaviour around the Euro 2020 final last summer and he fears things could get worse. “Well, we’re on a yellow card, aren’t we?” the exasperated Three Lions boss said. “We are where we are. We’ve got the embarrassment now of playing behind closed doors at home.

“Normally when you watch those things having happened abroad, we’re all grandstanding about it’s someone else’s problem and how that country should be dealt with. Now it’s us. That’s not a good optic on our country.”

England have submitted a joint bid with Northern Ireland, Scotland, Wales and Ireland for Euro 2028 and Southgate added: “We’ve got a women’s Euros here this summer which should be a brilliant experience for everybody and what we lived through last year was an amazing experience for the team. So we’re talking about something that could cost us the chance of doing those sorts of things because people will look from the outside.”

Before that, England supporters are set to descend en masse on Munich for the UEFA Nations League clash with Germany on June 7 – the first high-profile away international fully open to supporters since England played the Czech Republic in Prague in 2019.

After recent pitch invasions involving Billy Sharp and Patrick Vieira, Southgate was asked how he would feel if fans misbehaved themselves in the Allianz Arena. “No different to how I feel when I am on holiday and I see people not behaving themselves as they should be,” he said. “You are embarrassed if people who are English behave badly because that then creates a difficult environment for the next English people who travel there.

“We are all tarnished when that happens. And people who watched the Euro 2020 final here, that is their view of our society. It affects all of us.” He added: “It would be wrong to duck the questions on it.  That will cause me a disconnect with some fans in the same way encouraging the team to take the knee caused a disconnect with some of the fans and a dislike of how I do it. But I’ve got to say what I believe and try to take a stand for what we believe to be right.

“Why are we filming ourselves abusing other people, or taunting other people or looking for a reaction? Why do people dump their rubbish when they drive out of a service station, those small things make the difference – that has been proved over the years in different environments.

“Yes, football has got to try to manage it, but the behaviours are there, and they are going to be apparent outside the grounds and everywhere else. You are talking about a number that is too big, but it is not everybody. What can we do? We can only call it out. We can only express what hopefully I have expressed today. Whenever we travel, we are hopefully ambassadors for our country and that should stand for something. We would not be happy if people came to our country and behaved in that way.

“I know that it is unrealistic to expect people to form into a big group and take that challenge on. But if smaller numbers of people and individuals start having those conversations and questioning why people are doing certain things, I think that is something that it is possible for all of us to have an impact on.”