Home » Soccer » Gareth Southgate: England players ‘not bothered who the manager is’

Gareth Southgate does not believe that the uncertainty over his England future will be a distraction to his players as they edge closer to qualifying for next year’s World Cup.

Southgate’s present deal takes him up to the end of the tournament in Qatar and the Football Association hope to extend those terms until at least the 2024 European Championship.

Mark Bullingham, the FA’s chief executive, said during the run to the Euro 2020 final this summer that the England manager has his “unwavering support” and that he is doing a “brilliant job”.

But the morning after July’s penalty shootout defeat by Italy at Wembley, Southgate said he needed time to reflect before recommitting himself to England beyond the forthcoming World Cup.

Southgate now expects any talks over his future to only commence after the World Cup qualifying campaign is completed in November but does not expect that to trouble his players.

“I wouldn’t think they could care less!” he said. “They aren’t bothered who the manager is at club or country. One comes; one goes. The next one and they get on with it. So, no, it’s not a distraction in any way shape or form.

“I’ve got 14 months and if you can get through 14 weeks as a manager you have done well so it really isn’t an issue. I enjoy working with the team and I would imagine that we won’t even discuss that until after the autumn now.”

Southgate is nevertheless popular among the England players, having led a core group to two of the best tournament performances in the national team’s history, with the Euros runners-up finish following a World Cup semi-final appearance in 2018.

England have picked up from where they left off during the summer, beating Hungary and Andorra in their first two fixtures of this September camp, and sit five points clear at the top of Group I ahead of Wednesday’s trip to play second-placed Poland.

Southgate believes that there is now an expectation on England to win and challenge for tournaments, rather than merely hope, but is wary of complacency setting in at the midway point of the qualification campaign.

“It’s a good observation in that without doubt there’s that confidence in the team, which can only come from the evidence of being able to achieve results and performances that have led to those results.

“We saw that in Hungary, the way they approached the game, the belief, but also that bit of additional motivation from not having quite got to where we wanted to as well. That’s a good position for us to be in.

“But that has to be worked at every day. Any slipping of those standards, any suggestion we can win matches by taking our foot off the gas, then we’ll be in trouble. The level of competition is too high.

“The test of any match gives you different problems to solve during the evening. While it’s enjoyable to be with this team at the moment because of the things you’ve mentioned, that also can be a dangerous moment, if we allow standards to slip in any way.”

Gary Neville: VAR must change, but accuracy is up 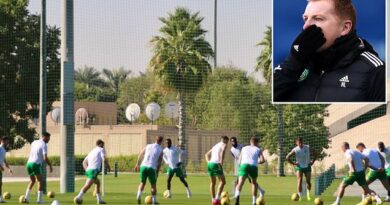