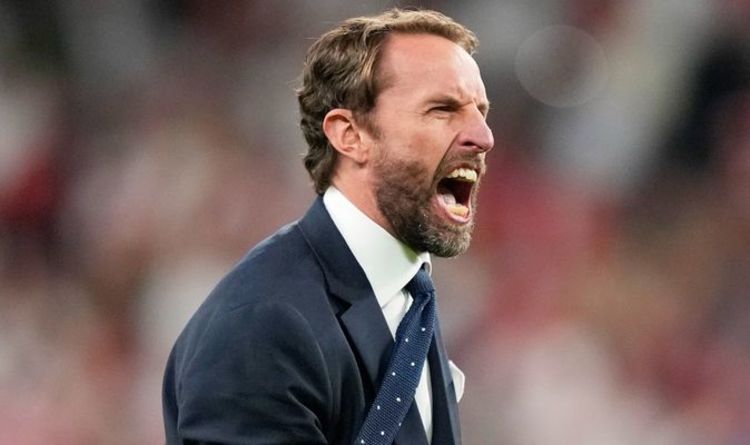 England boss Gareth Southgate revealed in his post-match interview that he had to jokingly remind young stars Bukayo Saka and Jude Bellingham that the Three Lions don’t often win semi-finals in the wake of a memorable victory over Denmark.

A 2-1 win ensured that Southgate will be leading his side out back at Wembley on Sunday evening against Roberto Mancini’s Italy for the final of Euro 2020.

It was hardly a comfortable affair however, as Denmark’s Mikkel Damsgaard ruined England’s 100% clean sheet record with a perfectly struck free-kick 30 minutes in.

Just nine minutes later and England were on level terms after Bukayo Saka’s pass for Raheem Sterling was intercepted by Danish skipper Simon Kjaer – only for the defender to guide the ball into his own net.

The game was forced into extra-time after neither side could find the breakthrough, England the more dominant team over the course of the 90 minutes.

Raheem Sterling, a constant thorn in the Danes side all evening, then won a penalty after jinking his way into the area only to be tripped as he looked to find a teammate in the box.

Captain Harry Kane stepped up to take the spot-kick, only to see his effort saved by Kasper Schmeichel, fortunately for England, the skipper reacted quicker than anyone else to lash home the resulting rebound.

The victory means England have gone one step further than their World Cup showing in 2018, where they were the wrong side of the same score-line at the hands of Croatia.

After the full-time whistle had blown and on-pitch celebrations had subsided, Southgate was quick to point out the rarity of the occasion to his younger players.

Speaking to ITV after the game, Southgate said: “I said the other day the young ones think it’s always like this.

“I just had to tell Saka and Bellingham it doesn’t normally work like this.”

Saka’s meteoric rise continued as he became the youngest Englishman to start a match at the semi-final stage or later of a major tournament.

The Arsenal star played a huge part in England’s opening goal and lasted 70 minutes before being replaced by Jack Grealish.

Ahead of the clash, fellow Gunners fan favourite Ian Wright sung Saka’s praises, explaining how he has justified his selection.

“The fact is, we’re talking about someone who joined Arsenal’s academy when he was like seven,” Wright said.

“He’s progressed through, at 17 he went into the under 23s, he’s always played at a high level.

“He’s played for England since under 16s, he’s played at every level, he’s someone who hasn’t just arrived here.

“He was destined to do what he’s doing, playing big games like this.

“That’s why everyone at Arsenal knows what he’s capable of, and we’re seeing that now.”