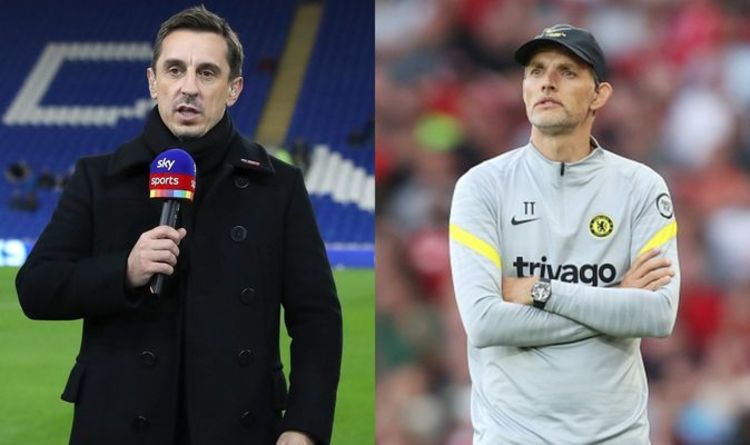 Gary Neville has identified where he thinks a problem area might be for Chelsea with an overwhelmingly positive verdict about their Premier League title chances this season. The Blues look like a real force to be reckoned with this term after adding Romelu Lukaku and Saul Niguez to their ranks in the transfer window.

Manchester United legend Neville has given his thoughts on Chelsea’s fortunes this season.

The former right-back thinks that their recruitment has stood them in good stead to challenge for the title.

“Saul is just another excellent player. He’s got massive experience at the top of La

Liga, massive experience in the Champions League and at international level,” he said on Sky Sports. “He fits the Chelsea profile of signing players that are ready.

“That’s Chelsea’s model and you look at what they’ve done in this transfer window in terms of ins and outs and again, it’s been another exemplary performance from them.

“They are a strong team. I’ve watched them twice already this season, away at Arsenal and away at Anfield.

“That is a really good team, a team that wins and is ready to win more. When they went down to 10 men at Anfield, I never really thought it was going to be easy for Liverpool to break Chelsea down in the second half.

“That’s when you know you are playing against a good team because that’s the toughest place to play.

“You only need two in there with the way they play but Saul’s addition means they can challenge on all fronts. It strengthens them enormously and makes them more formidable than they were at Anfield last Saturday.”

Neville does have some concerns about the defence though, with Tuchel opting not to bring in any defenders over the summer.

He added: “You could argue that Chelsea may be a bit light at the back, but what they do have is a system of playing with those two players sat in front of that back three that makes them solid.

“So what Thomas Tuchel has done since he’s come in is maybe recognise that they can’t be a back four.

“If you were looking at them as a pair of centre-backs you wouldn’t be sure about them winning the league, but with the three they have at the back, and sometimes it becomes a five with the two protecting in front, Chelsea are more than comfortable.

“They’ve got a system of playing that protects the individuals from potentially being isolated and that now, with the confidence and the belief they have when you win a Champions League like they did last season and with the business they have done in the transfer window, they are going to be very difficult to stop.”