Georginio Wijnaldum has played down reports he was close to a summer exit to Barcelona, but says “we will see what happens” regarding his Liverpool future as his current deal nears its end.

Wijnaldum only has 10 months left on his contract, meaning he could sign a pre-contract agreement with a new club in the winter transfer window, but says recent rumours linking him to Barca were “not that serious”.

The Netherlands international has started all four Premier League games so far this season for the title holders and held positive talks with Liverpool manager Jurgen Klopp over his future in September.

The Reds strengthened their midfield in the summer, signing Thiago Alcantara from Bayern Munich for £25m, providing competition for the likes of Wijnaldum.

“I don’t think it was that serious,” Wijnaldum said of the Barca speculation. “Otherwise you would have read a bit more, or more would have happened. 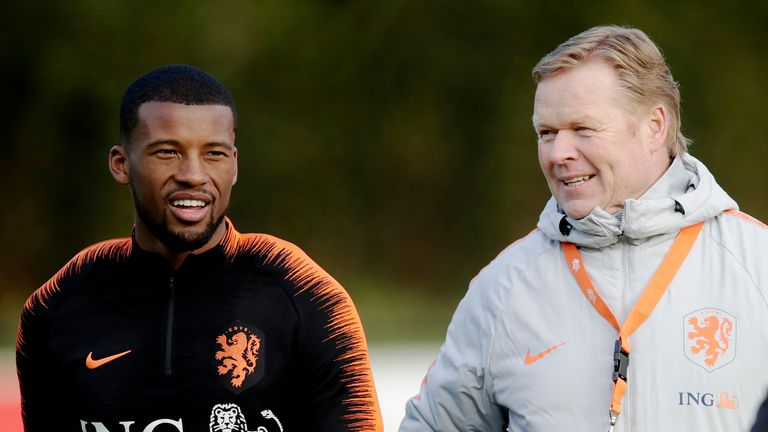 “There was nothing precise. The way it looks now, I will stay in Liverpool.

“My contract is valid for another 10 months and that can change. You never know in football. We will see what happens.”

Liverpool were stunned 7-2 by Aston Villa on Sunday, with Sky Sports pundit Jamie Carragher labelling it the worst performance of Jurgen Klopp’s tenure.

Wijnaldum played the full 90 minutes, describing it as “painful”, but stressed that his side must move on as quick as possible.

“We have to go on with that,” he added. “Of course, it was a painful experience that we are not accustomed to in Liverpool.

“But it happened and we have to learn from it. Now I am here and hopefully we will achieve good results and simply go on with it.”

The Netherlands face Mexico in an international friendly on Wednesday before two Nations League games against Bosnia-Herzegovina and Italy – all three matches are live on Sky Sports via the Red Button.