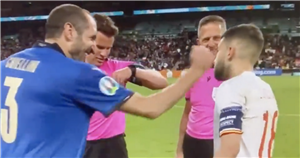 Italy captain Giorgio Chiellini left Euro 2020 fans in stitches with his 'ultimate s***housery' before the semi-final penalty shootout against Spain.

The 2006 World Cup winners are into the final at Wembley after winning a penalty shootout 4-2 following a 1-1 draw.

Alvaro Morata's saved effort handed the opportunity to Chelsea's Jorginho to cooly slot into the top-right, facing either England or Denmark in the final on July 11.

And footage emerged of Chiellini, who has 111 appearances for his country, getting into his opponent's heads with some cheeky tactics.

In the clip, the whistle has been blown after 120 minutes of play and the captains are with the match officials.

Deciding which end the penalties will be taken, the 36-year-old was seen waving his arms around and appearing to joke with Alba.

While the conversation cannot be heard, his motion suggests he was joking about choosing to shoot in front of the Spanish fans.

Chiellini then shoves the full-back, who looks uncomfortable, before landing a soft punch on his left cheek.

Who do you think will win Euro 2020? Let us know in the comments section.

After winning the coin toss to shoot in front of the Italian fans, the defender smiles widely to embrace his opponent with a bear hug.

Alba gets himself away as quickly as possible – and fans on Twitter were left in stitches on social media.

"Massive amount of s***housery from Chiellini there," one supporter said.

Another commented: "Chiellini. S***housery of the highest standard as always. Alba not keen."

While a third gave the Italian a new title, with: "Ah Chiellini, king of the s***housery. Absolute champion."

And a fourth added: "That s***housery from Chiellini before the pens was legendary."

Italy are into their first major tournament final since meeting Spain at Euro 2012, losing out 4-0 in Ukraine. 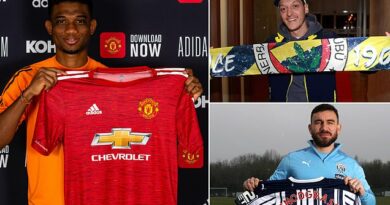