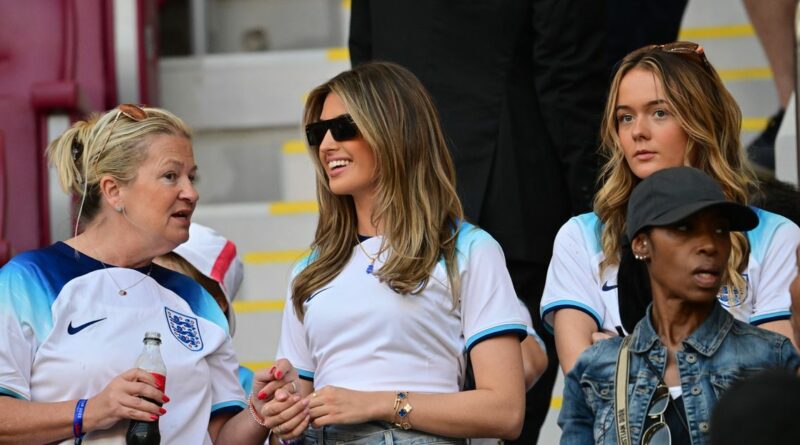 The famous England wags have been out in full force in Qatar.

They would have been amongst the jubilant Three Lions fans who have started the World Cup in explosive fashion. Jude Bellingham’s fantastic looping header gave Gareth Southgate’s side the perfect start.

Bukayo Saka and Raheem Sterling both got in on the act, scoring their first ever World Cup goals to put England in the driving seat., before a second goal from Saka and an instant strike from Marcus Rashford added extra gloss to the score-line. And, it is fair to say, the Three Lions’ class of 2022 were all buoyed by the presence of their wives and girlfriends.

Harry Kane’s childhood sweetheart and wife Katie Kane watched the England’s fantastic assist from the stands with their young daughter. The Tottenham Hotspur man received a pass into his feet, before swivelling and firing a perfect cross to Sterling, who made no mistake with his close range finish.

Jordan Pickford’s wife Megan was also seen in the stands with her young son. Fortunately for the Everton goalkeeper, he was also able to enjoy the match as a mere spectator as he was very rarely troubled by the Iranians.

How far do you think England can go in the World Cup? Let us know in the comments section below

Jack Grealish’s partner Sasha Attwood was also seen supporting the Three Lions in the Khalifa International Stadium. However, she will have to wait to see the Manchester City man in action as he began the match on the bench.

Fortunately, she may have been able to chat with Annie Kilner, the wife of Grealish’s City colleague Kyle Walker. Kilner will also need to bide her time, as Walker was not included in the squad to face Iran, as he is still building up his match fitness.

England next face the United States on Friday 25 in what will be another crucial match in Group B. Victory could all but confirm their place in the knockout stages, depending on results elsewhere.

However, if the Three Lions can continue building their momentum, the wives and girlfriends will be able to watch their England stars in action.