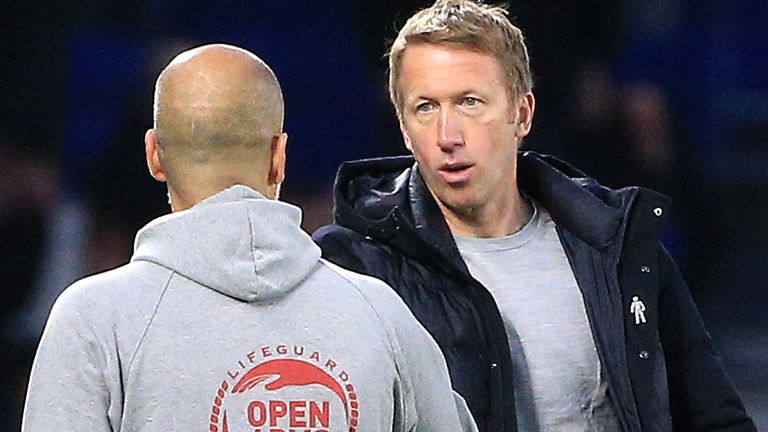 Graham Potter apologised for his role in a touchline disagreement with Pep Guardiola following Brighton’s 3-2 win over Manchester City on Tuesday.

The Brighton head coach was involved in a confrontation with Guardiola and members of the City coaching staff after the Seagulls recovered from 2-0 down in a dramatic game at the Amex Stadium.

City played the vast majority of the game with 10 men after Joao Cancelo was sent off for bringing down Danny Welbeck.

“The first goal (Brighton’s), I was a bit emotional and it wasn’t my finest hour, I have to apologise for that,” said Potter.

“It wasn’t meant with any intent or anything against anybody, it was an emotional response from me but it wasn’t a good one.

“So I apologise to them, like I said, no offence meant from my perspective but again I understand it wasn’t a nice moment.”

In his own post-match press conference, Guardiola refused to be drawn on the situation: “No, what I should tell I say personally.”

Potter praised the role the returning fans had played in sparking the comeback.

“They’re the best team in the world and the boys had to stick in and carry on and I am just so pleased for them that they get an evening like this in front of the supporters,” he said.

“The most important connection is between the supporters and the players at the football club and I think tonight would have helped that.

“It’s been a tough year. I think ’emotional’ is a good word to describe the feeling in the stadium.

“I thought the players gave everything, it was incredible. They put in a really top performance and I think the crowd appreciated it.”