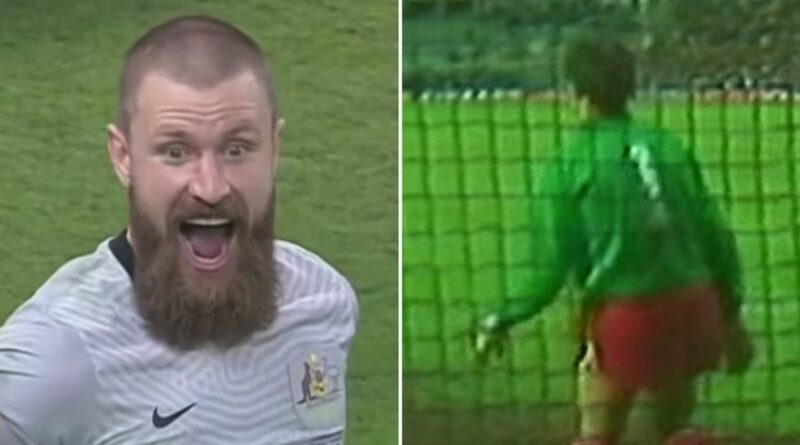 Substitute goalkeeper Andrew Redmayne is the new hero of Australian football after his goal-line dancing and decisive spot-kick saving sent the Socceroos into the World Cup at the expense of the heartbroken Peru.

Redmayne channeled the likes of Liverpool hero Bruce Grobbelaar and Netherlands stopper Tim Krul to thwart the effort of Alex Valera – having assumed a notable mental advantage before the ball was even struck.

Daily Star Sport has now taken a look at nine stoppers who have got the better of penalty takers using a string of distraction tactics that borderline on the unsportsmanlike – including Joe Hart.

Liverpool legend Bruce Grobbelaar, despite his longevity and consistency at Anfield, is perhaps best known for his mind games during one particular penalty shoot-out.

Should goalkeepers be allowed to dance? Give us your thoughts in the comments section below.

The former Zimbabwe international starred in the 1984 European Cup final against Roma, first pretending to bite the neck of Bruno Conti and then wobbling his legs on the line to put off Francesco Graziani as the Reds won 4-2.

Those dancing antics have been repeated by countless goalkeepers down the years, but none more successfully than Grobbelaar with his cup winning heroics.

Lionel Messi among others have hailed Martinez in his recent career resurgence, none more so than during their semi-final victory over Colombia on penalties in South America's top international tournament last year.

Martinez got in the head of Yerry Mina by telling the defender he looked nervous before saving his effort, and did similar as Bruno Fernandes missed for United in a later Premier League fixture.

During the Dockerty Cup final between Bentleigh Greens and Heidelberg United, Dimitri Hatzimouratis had the chance to win the game for Greens from the spot – but rival stopper Chris Theodoridis had another idea.

Strolling towards the ball, he booted it towards the dugout and was given a yellow card for his troubles.

However, he went on to save the penalty and a further effort as United went on to lift the trophy, having won 5-4 from the spot after a 1-1 draw in normal time.

In the quarter-finals of Euro 2004 against England, Ricardo helped Portugal to a notable victory on penalties – in which his tactics played a starring role.

The Sporting stopper, who would go on to play for Leicester, took his gloves off as Darius Vassell stepped up with the score at 5-5, and the rest is history.

Saving with ease, Ricardo then stepped up to score the deciding penalty to leave Three Lions fans both heartbroken and fuming at his bare-handed arrogance.

Jerzy Dudek wrote his name into Liverpool history books with his Champions League final heroics in 2005, which included an inspired penalty routine.

The Poland international saved from both Andrea Pirlo and Andriy Shevchenko from the spot, having distracted both using the "spaghetti legs" method made famous by Grobbelaar, after a word in his ear from Jamie Carragher about imitating the club legend.

In a tribute from fans, a charity single called "Du the Dudek" became a top-40 UK hit.

Joe Hart saved seven Premier League penalties during his time in the top-flight – but his most notable attempt at mind games ended in failure while playing for England.

The Three Lions took on Italy in the quarter-finals of Euro 2012 and somehow managed to get to a penalty shoot-out without conceding – and Hart managed to put off Riccardo Montolivo to give Roy Hodgson's men the advantage.

However, after sticking his tongue out at Pirlo, he was beaten by a Panenka chip from the ice cool Italian. Hart was left red-faced and England lost after misses from Ashley Young and Ashley Cole.

Jed Steer may not have the most experience of penalty shoot-outs on the list, but his antics for Aston Villa vs West Brom are worthy of a mention.

Steer played a vital role in their Championship play-off semi-final win in 2018/19 by walking and talking to Mason Holgate before saving his penalty.

Having saved another from Ahmed Hegazi, Villa won 4-3 and ended up beating Derby County in the final to reach the Premier League.

Premier League veteran Tim Krul was named in the Netherlands squad for the 2014 World Cup having played only five games for his country – and ended up a hero.

Krul was brought on by Louis van Gaal in the 120th minute with penalties looming against Costa Rica, and he played mind games with all their takers, while saving two of five.

The likes of Bryan Ruiz and Michael Umana looked baffled by his tactics, in which he repeatedly told them he knew where they would go – but they did end up losing on penalties in the semi-final to Argentina.

The newest name on the list is Aussie hero Redmayne, who was brought off the bench to replace Mat Ryan just before the shoot-out against Peru.

The final World Cup qualifier had been goalless across 120 minutes, with the comical dancing antics of the Sydney FC star stealing the headlines in just his third cap.

Redmayne had earned a reputation for saving penalties by saving three in a row for the youth side, but he only needed one here to book Australia's place in the finals in Qatar in November.