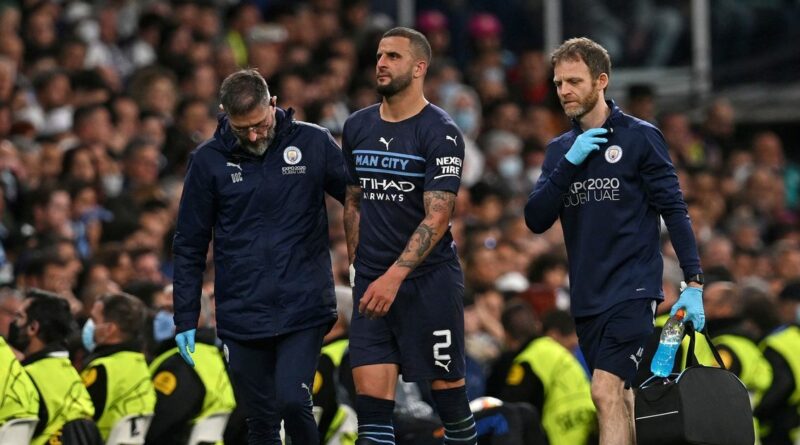 Manchester City have collapsed in the Champions League yet again, and Pep Guardiola's "risk" to play Kyle Walker has backfired in extreme fashion.

It's fair to say that Walker was rushed back by Guardiola, as he was named in the starting line-up by the Spaniard despite being injured since the Champions League quarter-final. Guardiola backed up his decision to start the defender by saying: "There are moments of the season you have to risk, this is one of them."

But Walker was taken off after pulling-up once more, and City capitulated in his absence, in what was their most brutal Champions League exit yet. And now Guardiola may be considering his decision to start Walker as he comes to terms with an unbelievable night in Madrid.

After falling apart against Lyon, and then settling for a runners-up medal after making it to the Champions League final against Chelsea last season, many thought this may finally be their year. And after Riyad Mahrez scored with just 17 minutes to play, it looked like they'd set up a second consecutive final.

But despite Real Madrid needing two goals to force extra-time, Rodrygo came off the bench to score a brace in injury time, as City were stunned. And a Karim Benzema penalty in extra-time completed a sensational turnaround, leaving Guardiola and his side shell-shocked.

However, defeat and an ugly exit isn't the only issue they have to deal with, as Guardiola's decision to play Walker has majorly backfired. And now they could potentially play the remainder of the season without one of their most important defenders.

When Walker was on, things were going smoothly, but City couldn't adjust when he went off. And although their hopes of winning a cup competition are over this season, they still have the Premier League to defend.

There are just four games remaining in the league, and Liverpool will be licking their lips at the fact that they could now be chasing a City side without Walker. And we are yet to see how this defeat will affect them at the Etihad against Newcastle on Sunday.

Of course, it may also play into City's hands domestically as they now have no further distractions. But the dressing room will devastated, and even if they win the Premier League, there will be a sense of disappointment.