Borussia Dortmund striker Erling Haaland's is the son of a Premier League icon and a Norwegian national champion heptathlete.

Haaland is reportedly set to emulate his father by moving to the Premier League this summer and is understood to have agree terms with Manchester City on a deal that would make him the league's highest earner. His father, Alf-Inge Haaland, spent three years with City as a player, having also had spells with Nottingham Forest and Leeds United.

The 21-year-old's sporting abilities may also have been influenced by his mother, who herself was a track and field athlete competing in the heptathlon.

His father first arrived in the Premier League in 1994, joining Forest from Norwegian side Bryne, before moving to Leeds three years later.

Gry Marita Braut was a national champion in Norway during the 1990s in the seven discipline event, although little else is known about her athletic achievements.

Pundit Graeme Souness did once allude to her ability, though, whilst discussing Haaland in an interview with Virgin Media, via The Sun, explaining: “He’s always on the half turn, he’s not squared up looking at his own goal. He’s really pacey.

Will the arrival of Erling Haaland fire Manchester City to a quadruple? Let us know in the comments section below "He’s got that sixth sense that all the top strikers have. He’s in the right place at the right time. He looks like he’s quicker than anyone, he’s bigger than anyone. He’s got a great chance of being a top man, hasn’t he? His mother must have been a good player because his dad was a plodder.”

It was in Leeds where Haaland was born, although the family would move to Manchester later that same year when his dad moved to City. He stayed at the club until 2003 when he returned to Norway. The defensive midfielder was infamously injured by a horrific challenge from Roy Keane in the Manchester derby in 2001 which left him with a serious leg injury.

That tackle did not end his career, though, and he even came out of retirement back in Norway in 2011 to spend two years playing for local side Rosseland. The sporting exploits of the family do not end with Haaland's parents either, with two of his cousins also professional footballers and both play as strikers as well.

Fellow 21-year-old Jonatan Braut Brunes is currently on loan at Norwegian second division side Start from Lillestrom, having begun his career alongside Haaland at Bryne.

It is also at Bryne that teenage forward Albert Tjaland currently plies his trade, having returned to the club on loan from Molde, where he scored on his senior debut back in July 2021 aged 17. 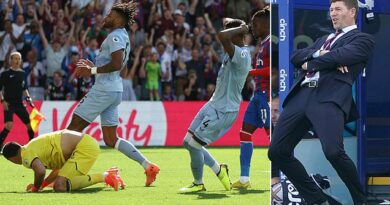