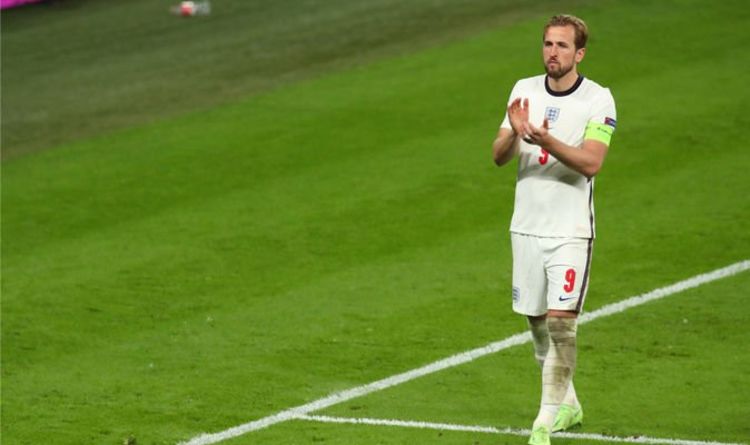 Reports claim that England captain Harry Kane could attempt to force a move away from Tottenham Hotspur by failing to report back for pre-season. Training has been back underway for non-internationals for a number of days, although those who were involved at Euro 2020 have been given extra time off to recover before the rigorous preparations for the new season begin.

Manchester City have supposedly been keen on Kane all summer, although England’s deep Euros run put a hold on proceedings.

Before the tournament, Kane reportedly told the club that he wanted to leave in order to compete for silverware at a more successful side.

Spurs chairman Daniel Levy has not made life easy for his talisman, slapping a £150million price tag on his head to ward off interest from Premier League rivals.

To compound the general feeling at Spurs, new boss Nuno Espirito Santo attempted to mark his territory by saying: “Harry is our player, period. No need to talk about anything else.”

Clearly, Kane’s club are not willing to play ball when it comes to granting him the move away which he desires.

As such, reports from the Telegraph indicate that certain players within the England camp believe that Kane may be forced to take drastic measures, such as not reporting back for pre-season training.

As the only Spurs player in Gareth Southgate’s Euro 2020 squad, the 27-year-old would have had the freedom to discuss such matters openly with his team-mates.

Having been at the club since he was a boy, Tottenham would surely want to avoid a sour ending to what has been an otherwise joyous relationship between player and club over the past few years.

At the price touted by Levy, City have gone public to claim that they would not be pursuing Kane.

Given that he has vocalised his desire to win trophies, however, and City are the reigning Premier League champions, Spurs’ leverage may be slipping through their fingers as the window goes on.

The England captain started slowly at this summer’s Euros, before coming to life in the knockout rounds and bagging four goals on the way to the final.

Once he got there, the man with the armband endured a nail-biting encounter with Italy, scoring his penalty in the decisive shootout only to see Roberto Mancini’s side lift the trophy.

Surely, that will only make Kane hungrier to bolster his trophy cabinet ahead of the new season.

Losing their star striker would be a disastrous start for Nuno and Spurs’ sporting director, Fabio Paratici.

Although it has been a possibility throughout the summer, it would still land them with the daunting task of replacing the player who finished last season as the top scorer and assister in the Premier League.

Kane knows that Levy is notoriously stubborn in the transfer market, so playing dirty may be the only way to play if he is to secure his move to pastures new.