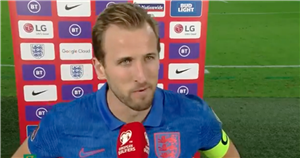 England were 4-0 winners in their latest World Cup qualifying fixture though the victory was marred by racism aimed at the Three Lions from the home supporters.

There were reports of monkey chants directed towards Raheem Sterling and Jude Bellingham, with Sterling also pelted with cups after he put Gareth Southgate's side ahead.

And the abuse allegedly didn't end there, with Tottenham star Kane reportedly subjected to vile chants after the game.

Mark Pougatch, presenting on ITV, said: "Harry Kane, after he did his interview with Gabriel (Clarke), had anti-Semitic insults thrown at him. There was a flare as well."

Hungary were given a two-match supporter ban for alleged homophobic chanting at Euro 2020.

However as Thursday night's game was a World Cup qualifier and run by FIFA, UEFA's fan-ban was not in place.

Though Kane demanded action from the governing bodies in a later interview, saying: "We hope that UEFA are strong with their sanctions, that's all we can ask.

How many England goals will Harry Kane end his career with? Let us know your thoughts in the comments section below

"It's unacceptable on any level and just disappointing. We are here to play football and to enjoy ourselves and put on a show for all these fans, home or away.

"So it's a shame that there are a few who decide to act like that."

England host Andorra on Sunday before a trip to Poland on Wednesday in their next two World Cup qualifiers.