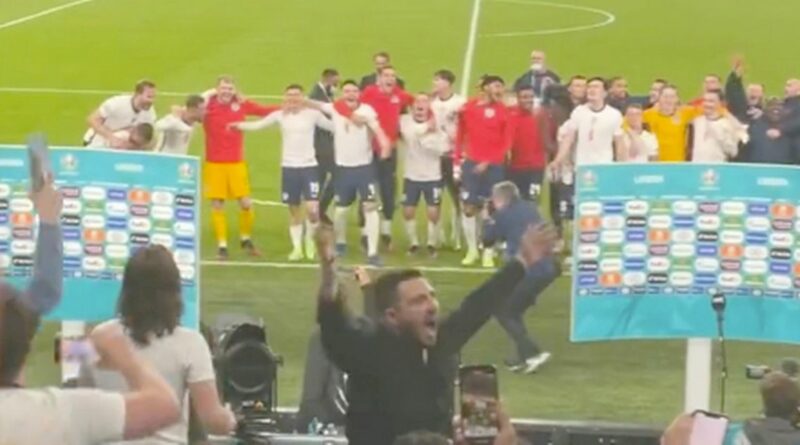 Sweet Caroline has become the unofficial anthem to England's Euro 2020 campaign – and now even the players are getting involved.

Katie Goodland, wife of Three Lions hero Harry Kane, shared a video of the stars singing the Neil Diamond hit after making it through to the final of Euro 2020 following a 2-1 win over Denmark.

On a tense night at Wembley, it was Kane who scored the crucial goal, tapping home the rebound after his extra-time penalty was saved by Kasper Schmeichel.

The final whistle prompted an outpouring of emotion not just around the country, but on the pitch too, as England's stars broke into song after confirming their place in the final.

Goodland posted a video showing the entire squad belting out the karaoke classic, much to the delight of the remaining 60,000 fans inside Wembley.

She added the caption: "What a team! @harrykane @england."

After the match, Kane spoke about what it meant to be in Sunday's final.

Can England win Euro 2020? Let us know in the comments section.

He said: "For once it fell our way. Credit to the boys, what a performance, we responded really well after falling 1-0 down but we controlled the game.

"Unbelievable – what a game though, credit to Denmark. We dug deep and we got there when it mattered. We reacted really well – we're in a final at home, what a feeling."

Kane also talked about the decisive penalty and admitted that his initial effort could have been better.

"I chose the side I was going to go, it wasn't the best executed penalty I've ever had sometimes you miss and it falls your way and thankfully it did today", he said.

"We know it's going to be a very tough game against Italy we've had a great tournament so far. One more game to go at home and we can't wait."