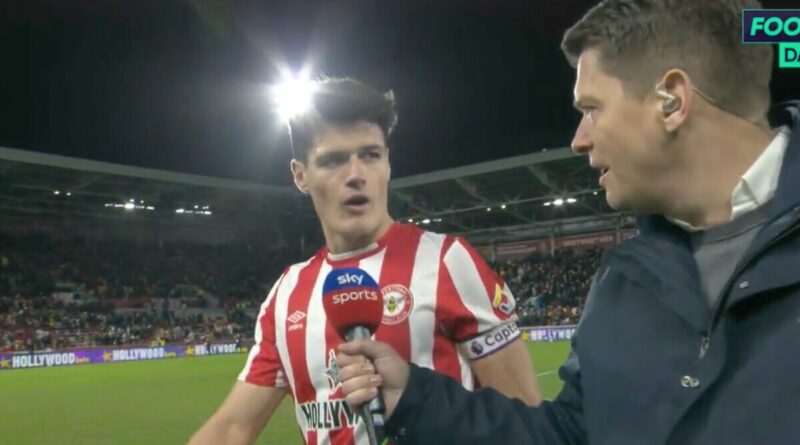 Premier League fans have reacted negatively to Brentford star Christian Norgaard being interviewed by Sky Sports at half-time during the Bees’ win over Bournemouth. The midfielder gave short answers to the reporter as he trudged towards the dressing room.

The Premier League changed its rules at the start of the 2022-23 season to say that broadcast rights holders could request that a club put up a player or coach to be interviewed at half-time during matches. It is up to the club whether they accept the request.

Crystal Palace boss Patrick Vieira was interviewed midway through the Eagles’ opening game against Arsenal. However, there have been few similar situations since, with the chats always being mocked for being futile.

But Sky have finally convinced a player to be interviewed at half-time and the result has been roundly ridiculed by supporters. Midfielder Norgaard gave reporter Patrick Davidson short answers as he headed towards the tunnel.

Asked if he had doubts when Ivan Toney stepped up to take the first-half penalty to put Brentford ahead, Norgaard responded “No, Never.” Davidson then asked if manager Thomas Frank would be happy with the performance, and Norgaard replied: “I’d like to think so, let’s see when we get in!”

Brentford boss Frank was also interviewed by Sky but it was the chat with Norgaard that drew the most negative reaction. “Literally just turning into an American sport. Hate this,” tweeted @WM80_.  @deni_sherlock bluntly put it: “Ridiculous.”

Another fan, @JBFC18 responded with a sick emoji, while @dbrooks92 shared a gif of the US office character Michael Scott saying: “Nope. Don’t like that.”

Others slammed the interview. However, some fans were positive and felt it should happen more often.

“Great half-time interviewing. Short, sweet and something we don’t often see. Would like more of this,” said @NiallAFC1886. @ebroglio8 observed: “Don’t see why anyone would have a problem with this but it seems a lot of people do.”

It remains to be seen if clubs will allow similar interviews in future, although Brentford appeared to be open to the idea. This was a good evening for Frank’s side as they moved above Liverpool into eighth with three points against the struggling Bournemouth.

Toney opened the scoring from the penalty spot after winning the spot-kick himself. Mathias Jensen slammed home a second goal midway through the second half.

When can Liverpool win the Premier League title now?

10 things we learned from the Premier League weekend