‘God, I got that one wrong, eh?’: Hearts manager Craig Levein brands himself an ‘idiot’ over his tactics against Celtic

Craig Levein assumed full responsibility for deploying the tactics that invited Celtic to dish out a 5-0 thrashing to his Hearts team in Saturday’s top-of-the-table clash.

Light-heartedly branding himself ‘an idiot’ for asking his injury-hit team to sit in and frustrate their hosts at the end of a gruelling week featuring a Betfred Cup semi-final and Edinburgh derby, Levein insisted he – and not his players – should be in the firing line for a performance that belied Hearts’ status as league leaders.

While last weekend’s cup semi-final remained competitive well into the second half, Celtic established superiority quickly to move ahead through Odsonne Edouard’s 17th-minute opener. Further goals from the Frenchman and Filip Benkovic made it three by the interval, with James Forrest and Ryan Christie completing a rout that cut Hearts’ lead to a single point. ‘The manager’s an idiot,’ stated Levein. ‘With all the high-profile games we’ve played, I thought our energy levels were starting to wane, so I made a decision to sit in and hit Celtic on the counter-attack. But, God, I got that one wrong, eh?

‘I’ve done the players a disservice because we had more energy than I thought we did. Once you set out that way, it’s very difficult to change it until half-time.

‘The second half I was pleased with, I know we lost two goals but at least we were in the game and had opportunities.

‘Put that one down to me. We got caught between defending deep and being passive when we defended and letting Celtic cross the ball.

‘As much as I’d like to blame other people, I can’t do it on this occasion. I told the players to forget it, we’ve been brilliant up to now and will be back to our normal selves next week.’ Hearts now have a full week to rest before facing Kilmarnock next weekend, while Celtic face the challenge of taking on RB Leipzig in the Europa League on Thursday.

While Benkovic had cause to celebrate his first Celtic goal, the on-loan Leicester defender viewed the team’s latest clean sheet as a source of greater significance ahead of the game against the Germans.

Celtic lost to Leipzig in Germany in the first instalment of the Group B double-header, with Benkovic benched as a precaution ahead of last weekend’s semi-final.

He can expect to start alongside Boyata and full-backs Mikael Lustig and Kieran Tierney against the Bundesliga side and he believes the back four is improving with every game.

He said: ‘This back four now has a few games behind us and we talk to each other in every training every day.

‘This is very important because when you speak so often it makes it much easier going into the games.

‘Europe is a big level. We must speak and concentrate more and in that way we can do something positive.’ Celtic manager Brendan Rodgers was particularly effusive about the performance of Edouard, whose two goals took his tally to 11 for the season. Signed from Paris Saint-Germain for a club-record fee of £9million yet still only 20, Edouard has shouldered a weight of expectation this term but is now mining some impressive form, opening the scoring with a superb finish from just outside the box.

Perhaps more pleasing to Rodgers was the sight of the Frenchman bundling home Celtic’s third, the kind of penalty-box work for which he is not renowned.

‘Odsonne’s goals-to-games ratio is excellent and it’s not just that,’ said Rodgers. ‘It’s about what else he gives to the team.

‘His first goal was brilliant for a young kid. His second was probably what you’d expect from a striker.

‘His intelligence then created a goal for James Forrest with a key pass. So he gives us so much and on top of that he presses the game.

‘Over the past week, we have shown the level these players have been at for the last two-and-a-half years. We’ve taken hits in Europe and there isn’t a midweek when we don’t have a game, so to keep coming back with that hunger is great. 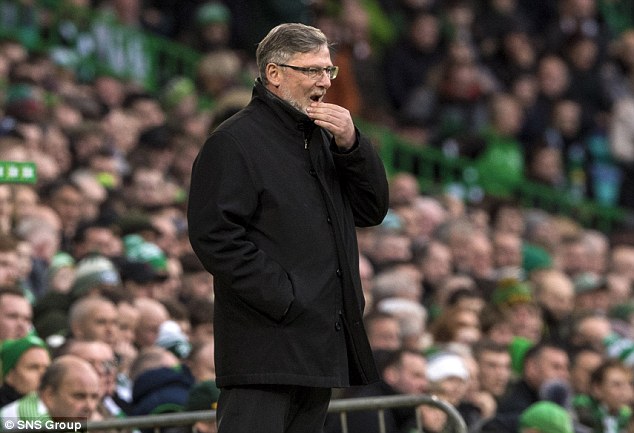 ‘The manager’s an idiot,’ said a disappointed Levein, before adding: ‘Put that one down to me’

‘It’s a good Hearts team with Craig doing a great job there, setting them up to be very difficult to beat. But we took five and if we had a better final pass, it could have been a few more.’ Rodgers revealed that Youssouf Mulumbu would be back in the squad for Thursday’s European test but admitted club skipper Scott Brown remains short of a comeback.

Levein, too, had some good news to add on the injury front concerning his captain Christophe Berra, who has been missing since suffering a hamstring tear during the win over Celtic in August.

‘We have a bit of time now,’ he said. ‘I don’t think we will get any players back until after the international break but they will not be that far away.

‘I think Christophe will be back at the beginning of December and might play three or four games before the winter break.’ 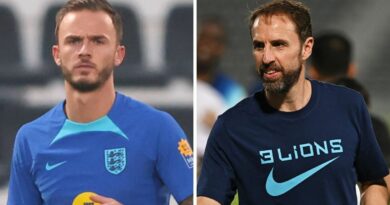 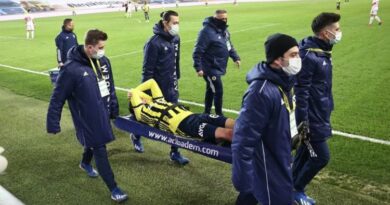