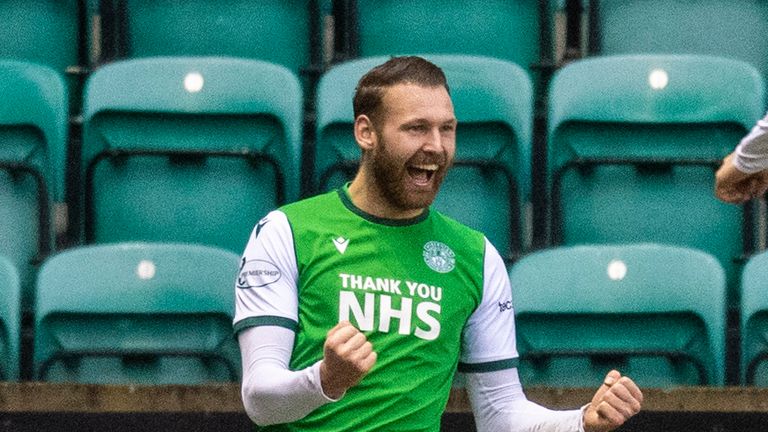 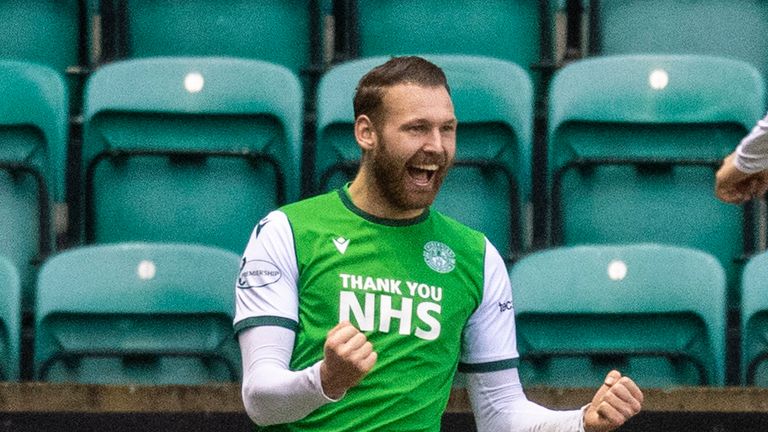 Martin Boyle’s double sent Hibernian five points clear in third place in the Scottish Premiership thanks to a 2-0 victory over Aberdeen at Easter Road.

Boyle converted a gift of a penalty in the 27th minute and sealed a third consecutive victory midway through the second half after Aberdeen goalkeeper Joe Lewis had saved three one-on-ones.

Aberdeen boss Derek McInnes admitted beforehand that their trip to Edinburgh had the feel of a cup final, but it proved an anti-climax for the fourth-placed team.

Although the visitors were well in the game before Lewis Ferguson felled Jamie Murphy in the box amid little danger, McInnes will inevitably face more criticism after one win in eight matches and four games without a goal.

The Pittodrie boss will pin his hopes on his new attacking players finding their feet, with former Hibs striker Florian Kamberi still to arrive following his loan move from St Gallen.

On top of the departures of strikers Sam Cosgrove and Curtis Main, McInnes this week lost the two players who had impressed just off the front for most of the season, with Ryan Hedges ruled out for several months through injury following Scott Wright’s move to Rangers.

Aberdeen started with Jonny Hayes and Lewis Ferguson in the advanced midfield roles behind new loan signing Fraser Hornby, but another three players filled those two positions before the game was up.

Ash Taylor shrugged off a knock and Dylan McGeouch returned for his first appearance since October, but the Dons suffered another blow inside four minutes when Greg Leigh crumpled in the process of passing the ball back to Lewis. The injury almost proved extra costly as the ball broke for Chris Cadden, but the Dons goalkeeper came off his line to save.

Leigh went off for Connor McLennan, who started at wing-back but swapped with Hayes before the first half was out.

The visitors had a decent spell despite the disruption and Ross McCrorie forced a save before McLennan mis-kicked from a chance inside the box. 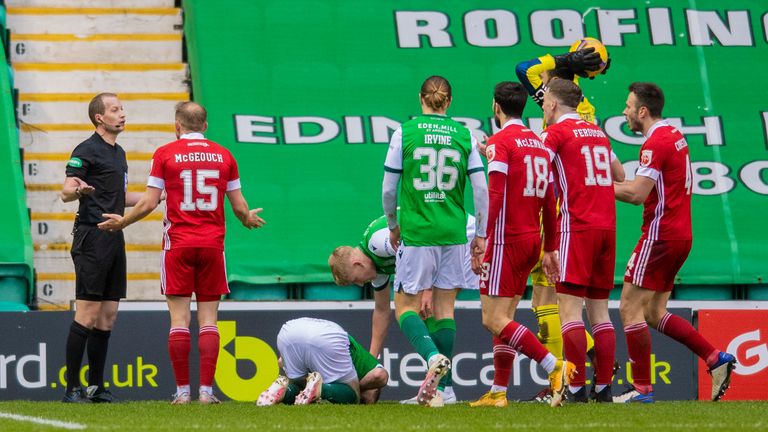 Hornby’s loose touch gave Jackson Irvine the chance to thread the ball through for Boyle, but Lewis produced another last-ditch stop.

Hibs, with Ryan Porteous and Kevin Nisbet again on the bench, soon went ahead. Murphy attempted to get to the byline and drive in a cross which went behind, but Ferguson caught him very late with a challenge and referee Willie Collum pointed to the spot. Boyle drove home from 12 yards.

Lewis again rescued Aberdeen before half-time when he saved from Boyle after Murphy had slipped the ball through a packed penalty box.

With Aberdeen lacking inspiration, McInnes brought on Niall McGinn and Callum Hendry 12 minutes into the second half and put them just off Hornby. McLennan went back off the park along with McGeouch.

The latter had an immediate impact, playing Boyle clear down the left channel. This time the forward found a way past Lewis to slot home his fourth goal in three matches.

Aberdeen had one good chance to get back in the game, but Hornby looped a header off the bar from Matty Kennedy’s cross.