UEFA has made the decision to delay Euro 2020 until next year due to concerns surrounding the ongoing coronavirus pandemic.

It means that Gareth Southgate will have an extra 12 months to consider his options before announcing his squad for the tournament, and there could be plenty of food for thought for the Three Lions boss.

While the England manager is likely to have several players in his plans already, the delay also gives some other names extra time to impress and earn a place.

Mirror Football takes a look at what the England squad could look when the competition finally starts in 2021.

Pickford has found himself under growing scrutiny this season after a number of errors, but he offers excellent distribution from the back and is almost certain to be included.

The Everton goalkeeper has long been England’s first-choice between the sticks and appears to be in little immediate danger of losing his place.

Aside from that one howler against Liverpool, Henderson has rarely put a glove wrong for Chris Wilder’s side this season and has made a number of big saves.

While it remains to be seen where he will be playing next season, another successful loan spell could see him make a serious claim for the starting job at the Euros.

The 27-year-old has been a reliable figure in goal for Sean Dyche’s side since making the starting job his own and could just edge out Tom Heaton.

Alexander-Arnold can already be considered as one of the best full-backs in Europe after two sensational seasons for Jurgen Klopp’s side which have seen him particularly impress with the quality of his passing and crossing.

With 12 Premier League assists already this season, the 21-year-old would be a valuable attacking outlet for Southgate and he appears to be in pole position for the starting right-back job.

The 29-year-old has enjoyed a good first season in Spain following his move to Atletico Madrid last summer and would add experience to Southgate’s squad.

He is likely to face tough competition from Manchester United ’s Aaron Wan-Bissaka, but Trippier’s more attacking nature could make him a more appealing option for the England boss.

Maguire has enjoyed a solid first season at Old Trafford following his £80million move from Leicester during the summer and was even awarded the club captaincy by Ole Gunnar Solskjaer.

The 27-year-old was an important member of Southgate’s 2018 World Cup squad and is likely to play another key role next year.

After recovering from some injury problems, Gomez has earned his starting place back at Liverpool and has formed one of the Premier League’s most solid defensive partnerships alongside Virgil Van Dijk.

With his impressive pace and composure, the 22-year-old is currently the most likely candidate to start alongside Maguire in the heart of the defence.

The Manchester City centre-back has had a difficult season with form and injuries, but is highly rated by Southgate.

It’s possible Stones would have missed out if the tournament went ahead this summer as planned, but the delay gives him another year to get back to full fitness and his best form.

Alongside Jack Grealish, the 27-year-old centre-back has been Aston Villa’s best player this season and made his international debut during the 6-0 win over Bulgaria in October. He also played 90 minutes against Kosovo.

Barring an injury or a big dip in form, it is hard to imagine Chilwell missing out on Southgate’s squad.

The Foxes defender did not feature in Russia two-years ago but has become Southgate’s preferred choice at left-back and is likely to be the starter at the Euros.

Saka did not start the season as a recognised defender, but the 18-year-old has frequently impressed when required to fill in at left-back for Arsenal this season and Mikel Arteta has even suggested that he could find himself playing there in the long-term.

If he is able to continue as he has started, another year of regular first-team football at the Emirates Stadium would surely put the teenager on Southgate’s radar.

Henderson has enjoyed a stellar campaign which has seen him emerge as one of the favourites to be named Premier League Player of the Year.

The Liverpool captain is already an important member of Southgate’s squad, providing valuable experience and leadership to the midfield.

Maddison has gone from strength-to-strength since joining Leicester in 2018 and has impressed once again for the Foxes this season to help put Brendan Rodgers’ side on course to qualify for the Champions League.

The 23-year-old playmaker has scored nine goals in 35 games this season and earned his one and only cap against Montenegro in November.

Despite some uncertainty over his place at Spurs following Jose Mourinho’s arrival earlier this season, the 24-year-old has become an important player for the Portuguese boss in recent weeks.

His quality on the ball and his accurate short passing fits Southgate’s style of play well and could be enough to see him claim the holding role.

Pep Guardiola has given Foden a growing number of opportunities to showcase his talent in recent weeks and the 20-year-old has not disappointed, with his man-of-the-match display in the Carabao Cup final a highlight.

If the talented playmaker sees even more first-team minutes next season and continues to impress, there is a good chance he could play his way into Southgate’s plans.

Alli has struggled to rediscover the excellent form he showed a few years ago, but has showed signs of improvement under Mourinho.

Another full season under the Spurs boss could see him included in Southgate’s squad.

With Southgate having no shortage of attacking midfielders at his disposal, there is an opportunity for Rice to earn a place as the defensive enforcer.

The 21-year-old has become a key figure in the heart of the West Ham midfield and featured six times in England’s qualifying campaign.

After recovering from his terrible injury record, Oxlade-Chamberlain has established himself as a key part of Klopp's Liverpool side again, and he could also be favoured to start for England next to club teammate Henderson next summer.

Kane had originally been a doubt for tournament after undergoing surgery on a hamstring problem in January, but the delay gives the forward plenty of time to make a full recovery.

As England captain and the most prolific goalscorer available to Southgate, the Spurs striker is guaranteed to be one of the first names on the team-sheet next summer – provided he can stay fit.

Abraham is one of a number of young players who has seized his chance to impress at Chelsea under Frank Lampard, with 13 goals in 25 Premier League games this season before his recent injury struggles.

Another solid campaign next season should see the 22-year-old earn a place in the 23-man squad as Kane’s back-up. 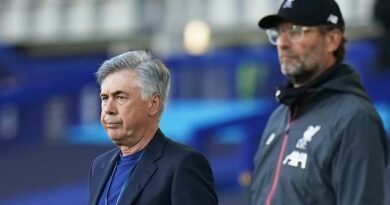 Gerrard left Morelos out of Rangers side due to transfer speculation