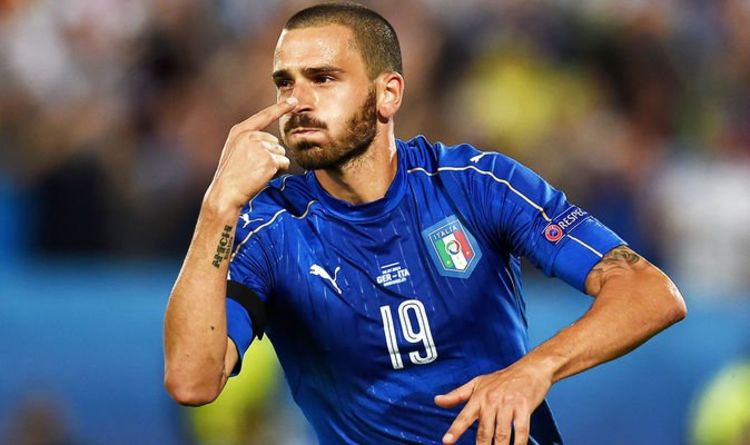 The Azzurri rolled back the years earlier this week as its Euro 2020 squad qualified for its first major final since 2012, beating Spain on penalties. But the squad which reached their last final nine years ago were under pressure after the authorities investigated members of the team for match-fixing. The 2012 team’s first-choice left-back, Domenico Criscito, pulled out of the squad for the European Championship after a dawn raid at their training centre near Florence.

Fellow defender Leonardo Bonucci, who is set to star for Italy in Sunday’s Euro 2020 final against England, was also put under investigation during the inquiry which saw teams docked points and players suspended.

Police arrested numerous suspects across Italy, including players and coaches, during a probe into possible match-fixing.

Notable names among them were also Stefano Mauri, the former captain of Lazio, and Antonio Conte – who would go on to later manage the Italian national side.

Italy’s Euro 2012 preparations were rocked after police spent three hours at their training base ahead of a game against Luxembourg, and also raided several other locations.

It came as part of Operation Last Bet, an investigation that focused on both Serie A and Serie B, Italy’s top two football leagues.

Conte, a former Chelsea manager who claimed the Premier League title in 2017, was also later charged with sporting fraud and put on trial in 2016.

The prosecutor called for a six-month suspended jail sentence and an €8,000 (£6,870) fine but Conte was ultimately found not guilty, with Judge Pierpaolo Beluzzi ruling the case against him as “baseless”.

After being found innocent, an emotional Conte took to Facebook to issue a statement on his ordeal.

He wrote: “Four years ago, with the search which took place in my home at five o’clock in the morning, began a nightmare which at times I thought I could never finish.

“Today finally puts an end to this ugly story.”

Bonucci and Criscito were also cleared of any wrongdoing.

The crisis recalled the Calciopoli match-influencing investigation in 2006 which broke just as players were preparing for the World Cup.

It implicated league champions Juventus and several other teams including Milan, Fiorentina, Lazio, and Reggina.

Despite the scandals, Italy’s impressive footballing side would become world champions in 2006 and European Championship runners up in 2012.

Since then, some experts feel the team has floundered and failed to live up to its potential.

They will be hoping to secure another major tournament trophy when they go head-to-head with England on Sunday.

But Gareth Southgate’s England side will not roll over easily, having already shown great resilience during Euro 2020.

The Three Lions go into the clash at Wembley off the back of impressive wins against Germany, Ukraine and Denmark.

But the Azzurri will also be fired up for the occasion, going into the clash after sending Spain home on Tuesday night.

Boris Johnson has refused to rule out the prospect of an emergency bank holiday should England win.

The Prime Minister has come under pressure to consider a one-off day off in the event of a win.

Asked during a visit to energy company Bulb’s central London headquarters on Thursday about the prospect of a bank holiday if England beat Italy in the final, Mr Johnson said: “I think that would be tempting fate; let’s see what happens.”

Calls to have Monday off have intensified, with more than 100,000 signatures on a petition hosted on the Parliament website.