Home » Soccer » IAN LADYMAN: James Maddison needs to get his career back on track 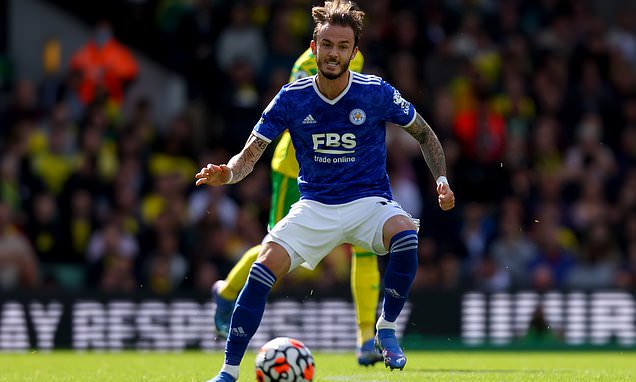 IAN LADYMAN: James Maddison could be one of Leicester and England’s most important players… the supremely talented midfielder needs to take inspiration from Jack Grealish and get his career back on track

One of the most compelling games of football I attended just before the pandemic hit was the Carabao Cup semi-final, second leg between Aston Villa and Leicester in January 2020.

Villa won the game but what struck me were the performances of Jack Grealish and James Maddison. Both were outstanding in a fabulous game.

Since that night, Grealish has moved forwards. He is a Manchester City and England player and on the evidence of Saturday’s game against Arsenal, looks at home under Pep Guardiola already. 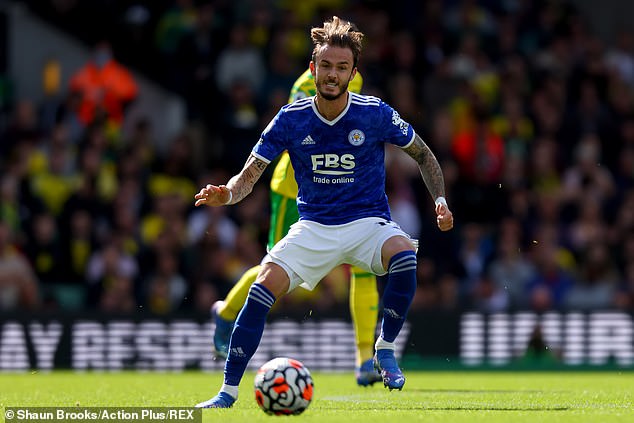 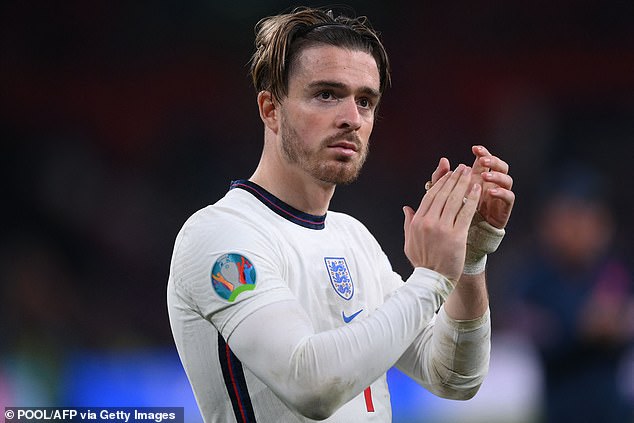 Maddison, on the other hand, has a little to do to inject some momentum back in to his career.

He has played once for England but Gareth Southgate is unsure about him. He did not make the provisional 33-man group ahead of the European Championship and was not even discussed when Southgate named his latest squad last week.

More alarming than that, however, was talk on the football grapevine throughout the summer that Leicester would be open to selling Maddison.

Manager Brendan Rodgers has not confirmed this and remains publicly supportive. Nevertheless there was interest from Arsenal that may not have been entirely unwelcome had it ever hardened into a concrete offer.

Only 24, Maddison has many years ahead of him and struggled with a hip injury last season. Equally, this is not a time for a career to go flat. He has started his team’s three League games this season but it was what happened at the end of the last campaign that was interesting.

Maddison was fit to play in the FA Cup final in May but was not selected. For important League games that followed — at Chelsea and at home to Tottenham — he was picked but taken off when two huge games were in the balance. 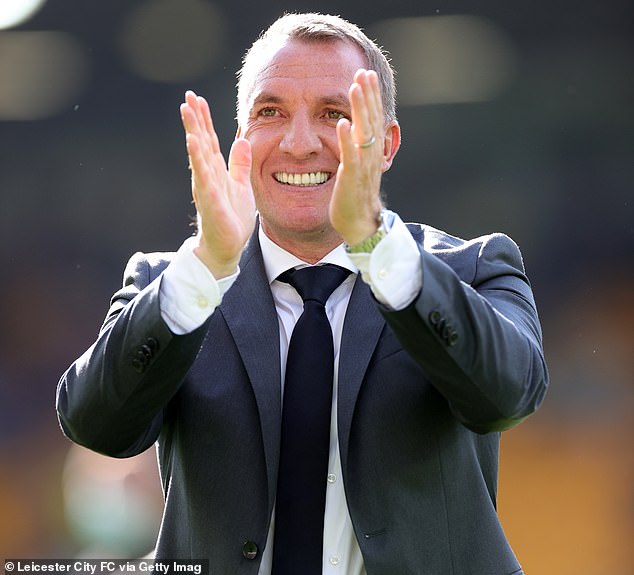 Rodgers, already irritated beyond measure that Maddison had been one of the players who broke Covid regulations to attend a house party in April, subsequently suggested that the midfielder should use an empty summer to make sure he returned for this season as fit as he possibly could be.

Rodgers — one of the best managers of players in the game — is not the type to say things like that by accident. What is not in doubt is Maddison’s talent. He has been coveted by big clubs ever since he broke through at Coventry when he was 17.

He can play off both feet, has a turn of pace, can pass and score goals. Equally, his enthusiasm for the game can be marvellous.

All of which makes it even more important that Maddison makes the right personal and professional choices now. He is talented enough to be Leicester’s most important player and a regular in the England squad. 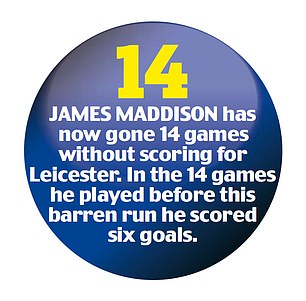 But careers can slip away quickly or, at the very least, not take the path to the top that at one time seemed inevitable.

I always think about Ross Barkley. A super footballer, the former Everton player has 33 England caps but is currently marooned and out of the picture at Chelsea. His career has not become what we anticipated it would. It can happen.

At Leicester, their academy continues to bring players through.

At Norwich on Saturday — where they won 2-1 — Rodgers sent midfielder Kiernan Dewsbury-Hall, 22, on for his Premier League debut. Maddison should view the competition from within and use it as motivation.

He remains one of the most talented members of a gifted English midfield generation. In the summer he was photographed training hard while on holiday in Spain. We hope it was an indication of genuine intent.

Referees need to apply caution to holding at corners

Late in the Liverpool-Chelsea game, referee Anthony Taylor appeared to be telling Cesar Azpilicueta to be careful about holding at defensive corners.

When the delivery arrived, Chelsea’s Mateo Kovacic had both hands gripped tightly on Diogo Jota. Azpilicueta was facing away from the ball trying to block the run of Sadio Mane.

Seconds later, Chelsea’s captain was on the floor holding his face — after no obvious contact in that area — while Jota had grown infuriated and shoved Kovacic over. The decision by Taylor? A free-kick to Chelsea.

Why would an attacking player choose to hold on to a defender when trying to reach the ball? What is to be gained from engaging an opponent in a wrestling match at that time?

Then ask yourself this. What kind of decision will land a referee in newspaper and TV headlines and what kind will see him have a quiet weekend? The answers are clear.

Far too many decisions are going the way of defensive players and while Taylor is a decent and honest referee, it is not beyond reason that he and others are making tight calls while motivated by caution. If VAR is checking hair’s breadth offsides, why not this sensitive area too?

The word that Sir Alex Ferguson did his bit to lure Cristiano Ronaldo back to Old Trafford is a nice one but Rio Ferdinand played his own hand with a phone call to his former team-mate when he feared the deal was stalling.

Ronaldo and Ferdinand used to live next door to each other in Cheshire when they played at Manchester United.

Whether Rio’s children still have the gifts once given to them by CR7 is less clear. They were Portugal shirts with Ronaldo’s own name on the back. We all love Ronaldo and are delighted he’s back but modesty was never his thing.