Football’s lawmakers have approved the introduction of permanent concussion substitutes on an initial trial basis from January.

Several high-profile dementia diagnoses across football has led to widespread backing for its implementation and for the impact of head trauma to be taken more seriously from within the game.

The incident, which saw Wolves striker Jimenez fracture his skull, led to concern over current protocols in place for head injuries, after Luiz was allowed to continue after being checked by Arsenal medics, only for him to be taken off at half-time because he “wasn’t comfortable heading the ball”.

IFAB said that its members “agreed that, in the event of an actual or suspected concussion, the player in question should be permanently removed from the match to protect their welfare, but the player’s team should not suffer a numerical disadvantage”.

An FA statement read: “Player welfare is of paramount importance and The FA has played an active role in lobbying for the IFAB to support the introduction of head injury substitutes within the rules of football.”

Competition organisers wishing to take part in the trial must apply to The IFAB and FIFA, through their respective national football associations.

The Football Association said it intends to implement the trials “at the earliest practical opportunity” of the men’s and women’s FA Cup competitions, as well as the Women’s Super League and Championship.

FA chief executive Mark Bullingham said: “The reason we want it in the competition is the reason most other leagues around the world have applied it.

“That is, for player welfare. We recognise it’s been a short pre-season, we recognise we’re in a very congested season now and we feel it’s appropriate to have the ability to have five substitutes and we’ll be applying that to our competition”:

The Premier League will discuss using concussion substitutes at its latest shareholders’ meeting on Thursday.

Headway Chief Executive Peter McCabe said: “Headway has been calling for concussion substitutes for years – and yet rather than celebrating this development, we’re left to question what difference this will actually make if IFAB moves forward with permanent, rather than temporary substitutes.

“The key questions are how will players be assessed for suspected concussion, and how will decisions be made about whether they should be permanently removed?

“The benefit of a temporary concussion substitution is that it allows for the player to be assessed off the pitch, in a quiet, appropriate treatment room away from the heat of battle and the glare of players, officials, coaches and fans.

“We know how difficult it can be for club medics to make concussion assessments on or at the side of the pitch, particularly in such a short space of time or when there are language barriers.

“If these decisions continue to be made in the same way, it is very hard to see how player welfare will be improved.”

Meanwhile, IFAB has also approved an extension to the option for managers to make up to five substitutes in top-level competition.

Domestic competitions will be able to use the ruling up to December 31 next year, while it will be available in international competitions until July 31, 2022.

Teams were first given “temporary dispensation” to make five substitutions per match by FIFA in April following the coronavirus outbreak, with the next review to be made at IFAB’s AGM in March 2021. Premier League clubs are expected to again discuss allowing five substitutions at this week’s meeting, despite rejecting the idea on two previous occasions.

The English top flight was the only major European league to revert to three substitutes at the beginning of the 2020-21 season.

IFAB also announced the interpretation of handball incidents “has not always been consistent” and further clarification was required at their AGM, to be held via videoconference on 5 March 2021.

Members agreed referees should judge the position of the hand/arm in relation to the player’s movement in that phase of play, when determining whether an offence had been committed.

FIFA also discussed further considerations regarding the offside rule and the potential for more affordable video assistant referees (VARs) systems, to enable more competition organisers to use the technology. 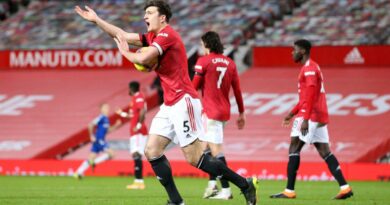