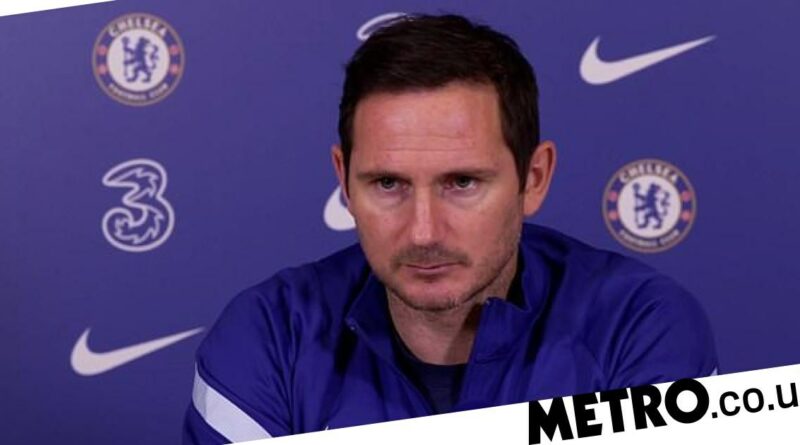 Frank Lampard insists he is ‘unconcerned’ by speculation surrounding his future at Chelsea and is only focused on arresting the side’s current slump after suffering defeat against Manchester City.

The Blues have now won just one of their last seven matches in all competitions after losing 3-1 at Stamford Bridge on Sunday, with Ilkay Gundogan, Phil Foden and Kevin De Bruyne all netting for the visitors.

Chelsea have now slipped to 8th place in the table with reports emerging claiming the club’s hierarchy are considering sacking Lampard if the team’s poor performances continue, but the under-pressure boss is paying no attention to the rumours.

Asked about the mounting pressure on him, Lampard said: ‘I’m not concerned on that point. I expected periods of difficulty this year, I said it when we beat Leeds and everyone was championing us to be title contenders – I know that it doesn’t come that easy, I know where we’re at.

‘Whether it puts pressure on me is regardless. Because a month ago everyone was asking when I’d sign a new contract, and now people will be saying different things because in quick succession, over a tight, busy period, we’ve lost four games of football.

‘So the pressure remains constant in this job and you know in tough moments that will be there. I didn’t get into this job being unaware of that.

Probed on whether he’s feeling any heat from the club’s board, who have been quick to dismiss under-performing managers in the past, Lampard continued: ‘I’ll always feel heat. I felt heat when we were on our good run because I know round the corner can be the negative.

‘We’re not a team that’s been churning out results and worked to get to a level of Liverpool or City. Or actually teams here [at Chelsea] that won things years ago in the Roman Abramovich era. But teams that have won things, that have prime players, prime top players that are Premier League greats – which is now what Kevin De Bruyne and Raheem Sterling are, in their prime. And we’re not that, in reality.

‘Maybe N’Golo Kante you can take out of that, Thiago Silva came here at the backend of his career, but when you look around the team there is a lot of youth in the team. And there are new players in the team that are trying to come in and settle and take everything on board in one go and that’s not easy.

‘I was very aware of all those things. I’m not going to speak for people above me or the board because I can never do that. Like how I couldn’t answer one month ago if I was going to get a new contract, it’s not my [area], I don’t start that conversation.

‘As much as I can’t answer now what they’re thinking about, the difficult run of results. It is what it is on those terms. I can only speak about it as I look at it as the manager of the club.’