I'm a Celebrity… Get Me Out of Here!'s David Ginola was spotted showing man-management skills good enough for him 'to get the Manchester United job' on Monday night's show.

The former Newcastle United winger is one of 10 celebrities appearing on the 21st series of the ITV reality show, which started on Sunday night.

In Monday's episode, Ginola was shown being a father figure for Emmerdale actor Danny Miller before he took part in a bushtucker trial.

Ginola told the soap star he would be proud of him and what he needed to do while gearing him up for the trial, which Miller went on to win.

“Think about all the good things and not the bad things," Ginola told the actor.

“You’re strong, I believe in you.You’re gonna be proud of yourself, do it for you, just for you.”

Miller went on to win the trial by collecting all five available stars and winning dinner for each of his fellow campmates.

Ginola's words of encouragement amazed viewers, with many taking to social media to point out that he could be a good fit for the vacant Manchester United manager's role.

Should David Ginola go into management after I'm a Celebrity? Let us know in the comments section below.

Ole Gunnar Solskjaer was sacked on Sunday morning, with the Red Devils currently looking for an interim manager to appoint until the end of the season.

One fan on Twitter wrote: “Get David Ginola in at Man Utd, the team talks would be mega.”

Another added: “Has David Ginola gone on I’m A Celeb to get the United job? Elite man management of Danny.”

Meanwhile, a third viewer tweeted: “The way Ginola is man managing this, I'd have him at United.”

Ginola has not yet gone into club management since retiring from playing in 2003, but did spend a year as a club representative in Singapore between 2010 and 2011.

During his playing career, he made 195 Premier League appearances for four different clubs, scoring 22 goals in the process.

On Sunday's episode, the 54-year-old opened up about his fear of being eaten by a shark and revealed he has had nightmares about it since watching the movie Jaws as a kid.

Mbappe admits he has urged Neymar to stay at PSG 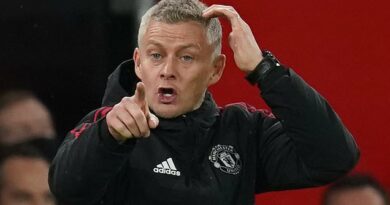