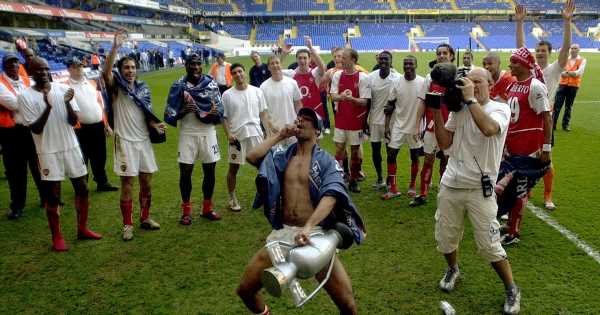 Arsenal could secure a return to the Champions League at the home of rivals Tottenham Hotspur on Thursday night.

If victorious, the Gunners will secure a return to Europe's premier club competition at the expense of their north London neighbours and it would not be the first time they have achieved success away to Spurs. Back in April 2004, Arsenal travelled to White Hart Lane needing only a point to clinch a third Premier League title.

A thrilling match followed, with Arsenal ending the day as champions and their players defying police orders as they celebrated with the away fans.

Arsene Wenger's side raced into a two-goal first half lead thanks to strikes from captain Patrick Vieira and Robert Pires, but were pegged back in the second half.

Jamie Redknapp got the hosts back into the game before Robbie Keane levelled the score with a late penalty, with the Spurs players celebrating wildly.

However, a draw still suited Arsenal, who had been told by police prior to the match not to over-celebrate if they won the league. Spurs' celebrations after equalising threw that out the window, though, with the Arsenal players celebrating their title triumph with the travelling fans at full-time.

Thierry Henry later recalled the incident to Sky Sports, explaining: “It was kind of weird because I remember we had orders from the police not to over-celebrate if we won the title there.

Will Arsenal qualify for the Champions League? Let us know in the comments section below

“In all fairness we all said we understood because it might go too far. We went 2-0 up then they came back. Jens Lehmann did what Jens Lehmann did sometimes. They came back into the game and drew 2-2. They started to celebrate like they won the league so I thought, ‘Wait, do they actually realise we just need a point to be champions?’

“I said to Ashley Cole at the final whistle, ‘Now we are going to celebrate’. We wanted to be humble at the beginning of the game but you want to celebrate a draw? Really? We just needed a point!

“We celebrated and the pictures are there to prove it now. It was always important to have the last laugh and the story will tell you we won the league at the Lane, and it wasn’t the first time by the way.”

Arsenal went on to end the season without a single league defeat, becoming the only side in Premier League history to go a whole season unbeaten and just the second in the history of the English top flight.

A win at the Tottenham Hotspur Stadium on Thursday will again see Arsenal celebrating at the home of their rivals, although this time not after winning the league.

Instead, three points will secure a return to the Champions League after five years away, at the expense of Spurs, who would be left unable to finish in the top four with just two matches remaining.