Inter Milan are set to reject any advances from Chelsea for star striker Romelu Lukaku this summer. The claim comes amid reports that the Blues were willing to splash as much as £110million for their former player, but they may need to turn their attention elsewhere.

Romelu Lukaku looks set to stay with Serie A champions Inter this summer after they ‘slammed the door shut’ on a possible exit for the Belgian.

Lukaku is one of a number of players being linked with a move to Chelsea as Thomas Tuchel looks to add another striker to his ranks.

Timo Werner’s underwhelming first season of 12 goals in all competitions and Olivier Giroud’s departure to AC Milan have left the German needing reinforcements up front.

But it does not look as though they will be bringing Belgian hitman Lukaku back to Stamford Bridge.

According to Sportitalia journalist Alfredo Pedulla, the Nerazzurri will not use Lukaku to raise funds this summer, having already lost manager Antonio Conte and a number of other first team players to lower their wage bill.

And the 28-year-old’s future at the San Siro appears to have taken another step to being confirmed.

That means Chelsea will need to turn their attention elsewhere, with Borussia Dortmund’s Erling Haaland also on their radar.

The Norwegian is expected to cost at least the £110m the Blues were willing to set aside for Lukaku.

But former Norwegian footballer and broadcaster Jan Age Fjortoft believes there are a lot of barriers in the way of a blockbuster transfer.

“I know he is the main target for Chelsea,” he said in conversation with Fabrizio Romano on the transfer journalist’s Twitch channel.

“I think everything done up to that will be through third person, through agents, whatever, to ensure that when they go for the bid, the bid will be accepted.

“There are a lot of parties here who don’t want to lose face.” 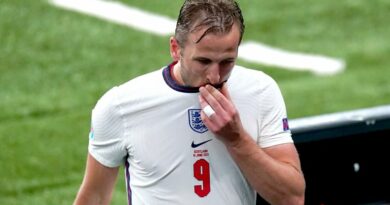 Euro 2020: Harry Kane says England performances not hampered by injury or speculation over his future