Emile Smith Rowe scored again for Arsenal in their Carabao Cup win as 18-year-old continues to impress… so is he the man Unai Emery has in mind to replace Aaron Ramsey?

It certainly won’t be the cleanest strike of Emile Smith Rowe’s career, but the 18-year-old is unlikely to care one jot.

His first senior goal at the Emirates Stadium proved Arsenal’s winner as they beat Blackpool 2-1 to set up a mouth-watering Carabao Cup quarter-final against local rivals Tottenham.

For Smith Rowe, it was another milestone ticked off in a career that is truly beginning to flourish under Unai Emery’s guidance. 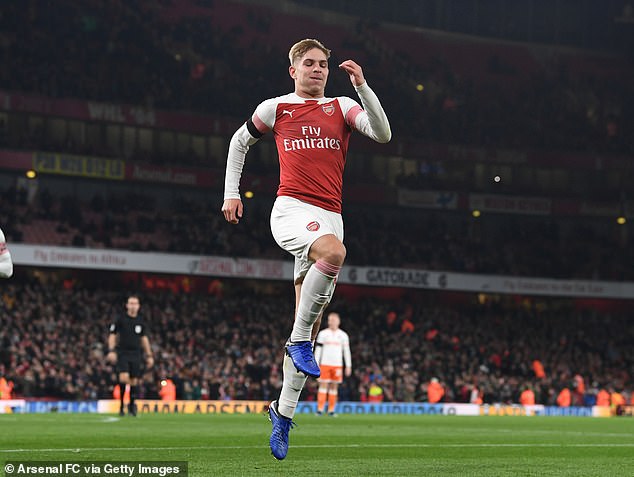 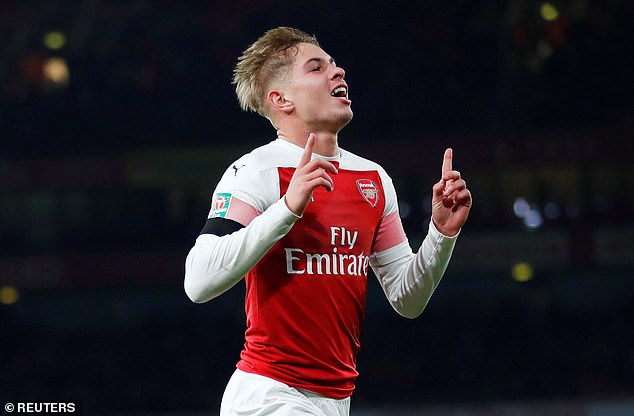 The 18-year-old midfielder, an academy graduate, continues to impress for the Gunners

dreams do come true??❤️ words can’t describe how it felt? through to the next round?? support was unreal❤️ pic.twitter.com/muam1uNrwS

The teenage midfielder wasted little time in impressing the new boss, not least when he scored a stunning individual goal against Atletico Madrid in pre-season.

And it’s clear that this highly-regarded product of Arsenal’s academy is now being trusted with bigger and bigger assignments as the weeks pass by.

The end of July saw Smith Rowe sign a long-term contract with the club. September saw him make his first-team debut against Vorskla Poltava in the UEFA Europa League, the first player born in the 21st-century to play for Arsenal.

His first start in red and white followed against Qarabag on matchday two, as did his maiden goal. A first Premier League appearance appears to be just a matter of time.

These landmarks are all stepping stones to what will hopefully be something bigger for the England youth international. A bright future beckons. 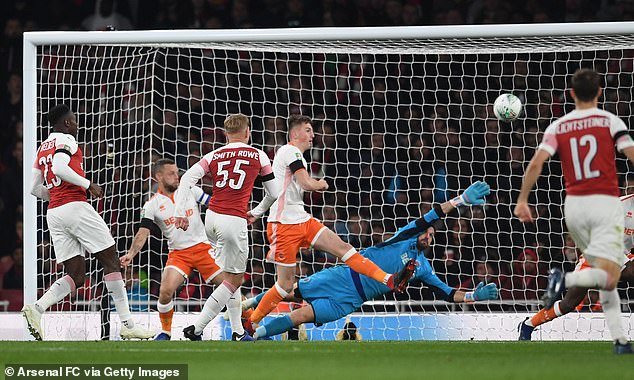 Indeed, some are suggesting that one of the reasons why Arsenal are willing to let Aaron Ramsey depart is that they have a replacement ready-made in Smith Rowe.

Certainly there are some similarities in their midfield creativity, range of passing and willingness to make runs into scoring positions in the box.

Though he usually lines up on the left – in contrast to Ramsey’s more central position – Smith Rowe still has plenty to offer.

As Sportsmail’s Secret Scout wrote recently: ‘He knew all the right areas to receive the ball and constantly gave a problem to his marker – drifting inside, dropping deep but most importantly showing he is prepared to make forward runs.

‘Two excellently timed forays into space behind the opposition back line were outstanding. 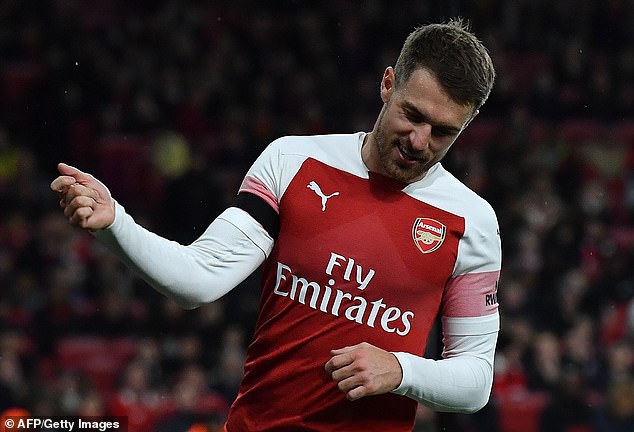 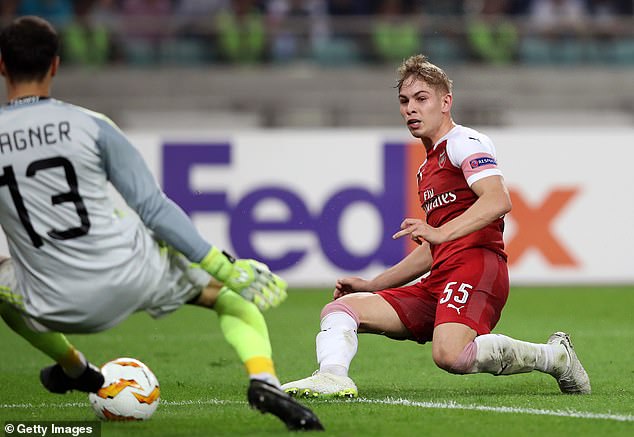 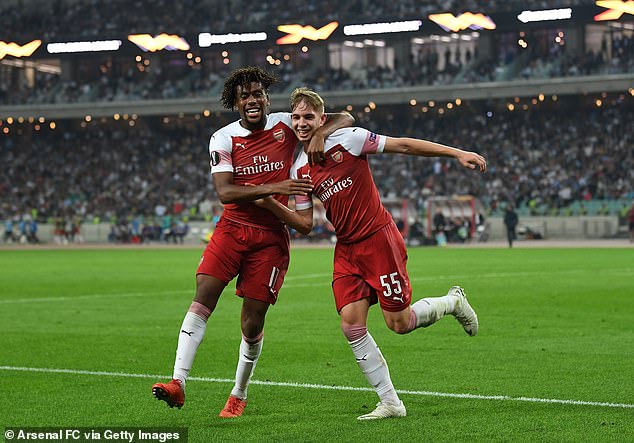 ‘Always taking the ball on the half-turn, he never appeared in trouble – accepting it with a composed nonchalance – and he can pass, too.’

Such qualities were long evident to regular watchers of Arsenal’s under-18 and under-23 teams as Croydon-born Smith Rowe worked his way through the academy ranks from the age of 10.

His maturity meant he was always ahead of the curve, playing for the under-23 side at the age of just 16. It’s another reason why some Arsenal fans believe he can effortlessly step into Ramsey’s shoes.

A meticulous training ground coach such as Emery can only be good for his development, working on fine-tuning the various aspects of his game until he is fully ready for the cut and thrust of the Premier League. 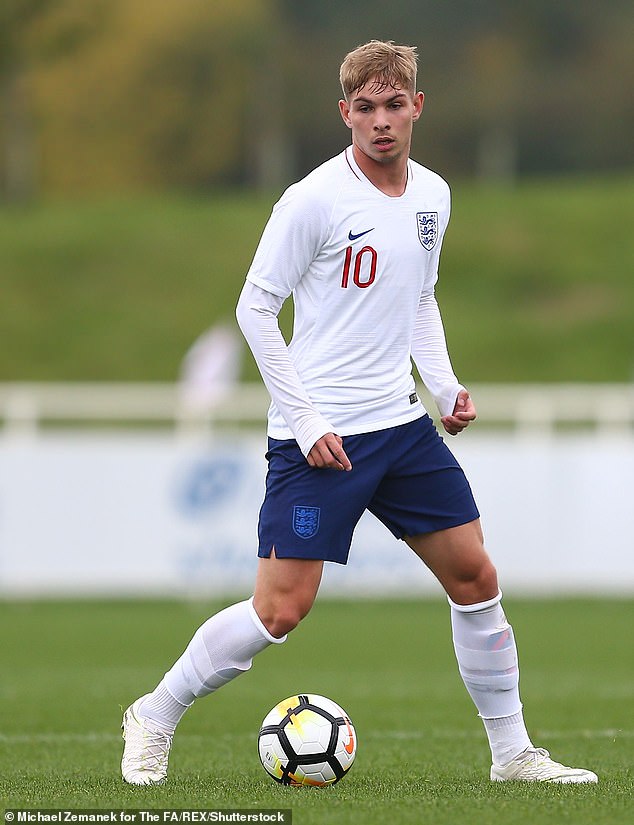 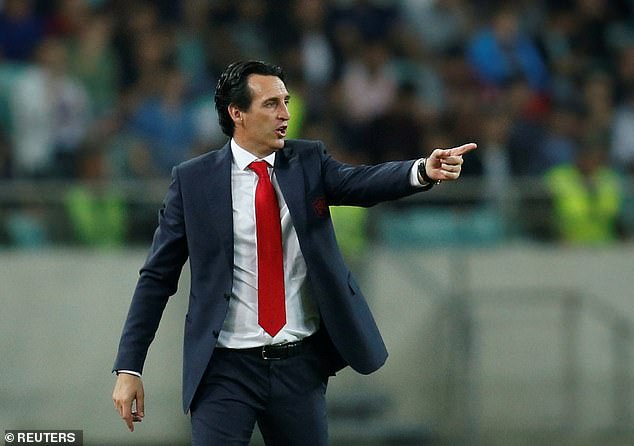 After scoring against Qarabag in Azerbaijan – and becoming, at 18 years and 67 days, the youngest player to score for Arsenal since Alex Oxlade-Chamberlain in 2011 – Emery praised Smith Rowe’s humility.

‘If I say one condition, I say his mentality,’ said the manager. ‘He is humble, he listens every day in training, in video analysis and before every match.

‘I want him to stay humble and keep his feet on the ground.’

That isn’t to say Smith Rowe lacks ambition. In an interview this week, he said he looked up to Barcelona stars Lionel Messi and Andres Iniesta as a kid and is inspired by Manchester City’s Kevin de Bruyne.

Time will tell if Smith Rowe achieves such heights but there’s no question he’s taking vital steps in the right direction. 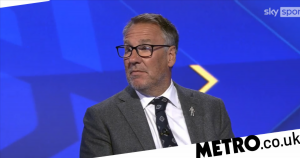