“What a footballer,” says Jurgen Klopp. “One of the best in the league,” according to Pep Guardiola. For Jose Mourinho, it’s his creativity. For Mikel Arteta, his personality. Brendan Rodgers and Ole Gunnar Solskjaer point to his ability to drag opponents out of position. What every Premier League manager can agree on is that Jack Grealish is a bit special.

As he links up with the England squad this week, the relative merits of the Aston Villa captain are being assessed once more. Grealish was named man of the match in his only international start so far – the 3-0 friendly win over Wales at Wembley – but did not make it off the bench for the subsequent competitive games against Belgium and Denmark.

England manager Gareth Southgate already appears sick of answering questions about why the in-form Grealish is being made to wait, but the noise is not going to stop. Not when he is the most creative English player in the Premier League. Not when he joins up on the back of another masterful performance in helping Villa beat Arsenal 3-0 at the Emirates Stadium.

Paul Merson played for both clubs as well as alongside Southgate for Villa and England. He is at a loss to explain why there would be any reluctance to trust in Grealish’s talent.

“He is one of the only players I just love watching play. Against Arsenal, the goalkeeper throws him the ball and he run the length of the pitch. Hector Bellerin comes over and he just bodies him off and he still has the composure to put the ball through.

“How is he not playing at the top level? I don’t really know what I am missing. When I watch him, am I seeing something different that no one else is seeing and I haven’t got a clue?”

Southgate has made it clear that he does not consider Grealish as a candidate for one of the deeper roles in midfield. In the current system, that means he is competing with the wide forwards, where Raheem Sterling, Marcus Rashford and Jadon Sancho are established.

Even among the next in line, Phil Foden and Mason Greenwood remain in the frame, while Mason Mount appears to have won Southgate’s favour as a result of his off-the-ball work.

“I don’t know whether Southgate may just look at it and wonder what his position is,” says Merson. “He is a bit of a free spirit. He plays over on the left but it is definitely a free role.

“He’s got his certain players that look like they are going to play every week as long as they remember their boots. But in terms of talent, I said it a long time ago, I think he is the most talented English player we have got. He is the nearest thing to Paul Gascoigne we have had.” Southgate himself was quick to brush off that particular comparison but the irony is that one of Gascoigne’s most notable traits – his ball-carrying from midfield – has become one of the characteristics of Grealish’s game that seems to so divide opinion.

He is routinely accused of holding onto the ball too long. The focus is on what Villa might have gained had he released it quicker rather than what they have gained from his ability to retain it for so long. The statistics clearly highlight his positive impact as a ball-carrier. 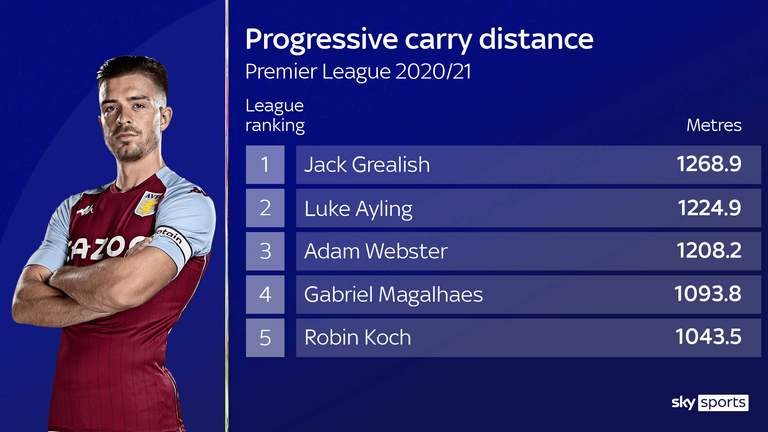 No Premier League player has progressed the ball so far upfield this season, with Grealish ranking well ahead of any other midfielder or forward for what Opta calls progressive ball-carries.

There has been an end product too. Nine of these ball-carries have resulted in a shot. Again, that is the most of any player in the Premier League this season. It has been vital for Villa with the solo run that set up Ollie Watkins to score against Arsenal just the latest example. Merson believes that even if the accusation did once have some substance to it, that no longer applies. “I don’t think Grealish holds onto the ball too long now,” he explains.

“Last season, towards the end of the campaign, I think he had become a bit of a school-team captain. I didn’t think he trusted in the other players, so he tried to do it all on his own.

“But now, he has got a fit John McGinn. He has got Matt Target with him on the left, who is comfortable on the ball and good going forward. He has got trust in him and he has also now got Ross Barkley, who he looks like he loves playing with, and then there is the pace of Ollie Watkins. I don’t think he keeps it that much anymore.” 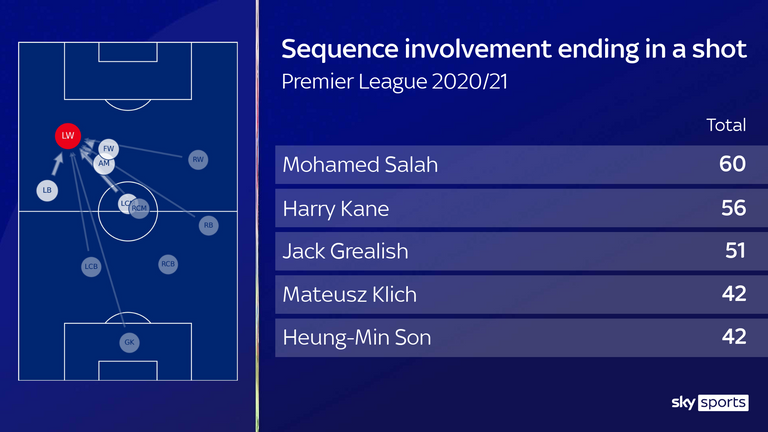 Having better players feeding the ball to him has made a big difference this season – and they are undoubtedly feeding it him. The pass to Grealish has been Watkins’ most frequent in every single game this season. In three of the five matches in which they have all started, Watkins, Targett, Barkley and McGinn have all passed more to Grealish than to anyone else. When he has possession in that area of the pitch as often as he now does, something is going to happen. That is why he is, statistically, the most creative player in the Premier League this season, with the highest expected-assists tally of anyone around.

With four goals and five assists, his effectiveness is not in doubt.

Rodgers, whose Leicester side are top of the table but were beaten at home by Grealish’s Villa, explains why.

“He’s got a real in-built brain for football,” says Rodgers. “When he carries the ball, his awareness of his space really shows me the talent he is. He understands where space is, he gets tackled a lot, he stays on the ball a bit longer than other people and draws fouls, but also draws people out of position. His weight of pass is exceptional.” This is a key point regarding Grealish’s willingness to hold the ball that little bit longer than others. It moves opponents around.

Later in his career, Paul Scholes, the master passer, reflected on his performances, and took the view that he played too many needless passes. Rather than looking to make something happen he recycled possession instead. He even cited this as the reason for his initial decision to retire in 2011, before being coaxed back by Sir Alex Ferguson.

Grealish prefers not to play the needless pass to a player who is not in a better position. Instead, he waits. “Whether he is off the left, middle or right, he attracts players to him,” says Solskjaer. A player vacates their defensive zone to close him down. A space opens up.

If that results in a foul, and it often does, then this does not necessarily mean that the opportunity has passed. In fact, it can open up another avenue from the resulting set piece. It is just another reason why Grealish could be an important weapon for England.

For now, despite the fact that set-piece goals were the basis of the team’s run to the semi-finals of the World Cup under Southgate in 2018, that weapon is not being deployed.

“They played Denmark and needed to make something happen,” says Merson. “They were down to 10 men and they had to try to win a free-kick or a corner because that was the only way they were going to score. And you have got the most fouled player in the Premier League, the best dribbler of the ball in the league by a million miles, and he never got on.

“We were going nowhere, and the team never looked like scoring. He beats players for fun and if you are doing that, you are going to get free-kicks and corners, and that is what they were virtually playing for. For me, that tells you everything you need to know. If you are not getting on in a game which is crying out for your skillset, you are struggling.” Grealish’s skillset is unique. But perhaps that is the problem. There is no player in the team for which he is an obvious upgrade. Instead, he brings something different entirely. Something that does not necessarily fit with Southgate’s principles of pressing when out of possession but could yet turn a game England’s way because of his quality in possession.

“It is dangerous [for Southgate] because he was man of the match in the Wales game and then he doesn’t get on again,” adds Merson. “If you play him against Republic of Ireland and he rips them to shreds, then all of a sudden, he has got to be in the team.

“The fervour for Southgate to pick him builds and builds, but I don’t think he gets in the team at the moment. Not because I do not think he should be, but Southgate just does not see it. He has got his way of playing and his players, and that is it.”

Southgate does have his way of playing and given that Grealish is a one-off talent, who makes different decisions in possession to anyone else, it should be no surprise that he does not fit the system.

But perhaps it is time to flip the thinking. Because if Jack Grealish does not fit the system, then surely, when he is this good, the system that you are playing must be wrong. 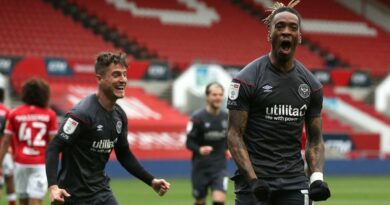 Serie A 'could restart in a month with anti-coronavirus measures'