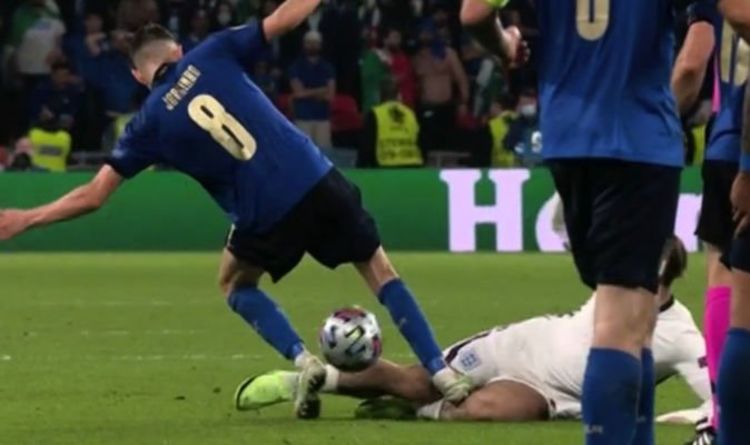 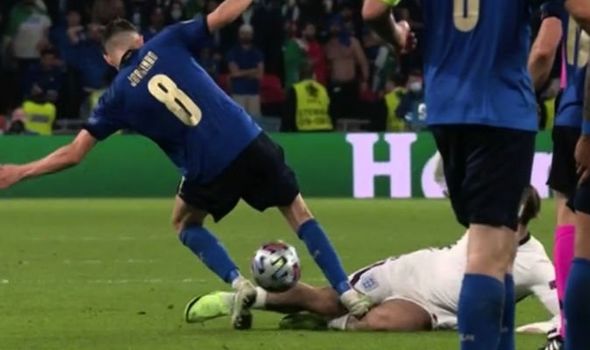 Jack Grealish was on the receiving end of a nasty tackle from Italy’s Jorginho in the Euro 2020 final. The midfielder came on for Mason Mount in the 99th minute.

It saw Jorginiho dive at Grealish’s right knee in a dangerous tackle which could have caused serious injury.

“That was a shocking challenge from Jorginho.”

The Aston Villa midfielder was furious with the challenge and showed referee Bjorn Kuipers the stud marks on his knee.

But the Dutch referee only showed a yellow card to the Chelsea player.

On ITV, Lee Dixon was equally unimpressed with the challenge but felt it did not warrant a red card.

He said: “As soon as you go to ground, you run the risk of getting one like that whether he gets anything on the ball or not, endangering an opponent getting a red.

“It’s not a red for me. The referee’s just gone about that right.”

Jorginho stepped up during the shootout but saw his penalty saved.

But it did not matter as Bukayo Saka’s miss ensured Italy were crowned European champions.

It means England’s wait for a major international trophy goes on, having failed to lift any silverware since the 1966 World Cup.