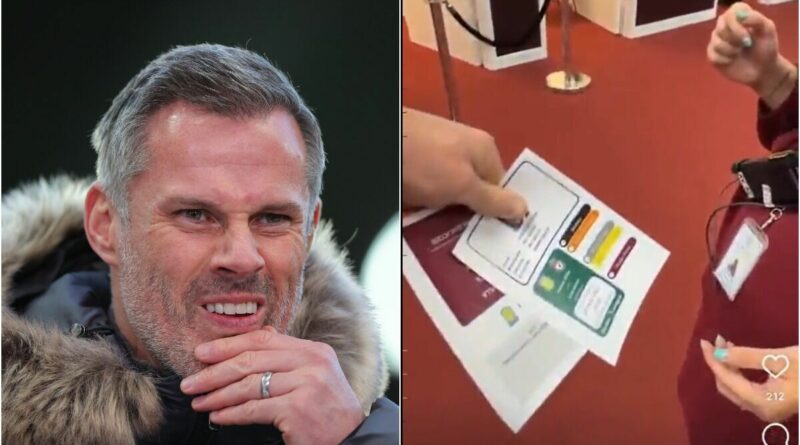 Liverpool legend Jamie Carragher was denied a visit with his friend and former team-mate, Steven Gerrard, before kick-off at Villa Park on Tuesday night. Carragher caught the awkward exchange on camera as an Aston Villa employee stopped the Reds reunion before an entertaining Premier League clash got underway.

Carragher was evidently keen to catch up with fellow Liverpool legend Gerrard before it became strictly business between Villa and the Reds. Jurgen Klopp’s men had to win to keep their hopes of a Premier League title, and with it the quadruple, alive.

Despite going one down early on, they did just that to keep the pressure on Manchester City. Joel Matip drew Liverpool level before Sadio Mane’s stooped header sealed the comeback with a 2-1 win.

Carragher may have cheekily asked his former team-mate to go easy on Liverpool before the game, but the video footage showed that he was turned away in the backstage area at Villa Park with his tail between his legs.

When an employee questioned his media pass, Carragher argued: “We work for Sky Sports. We’re Steven Gerrard’s mates and he said it was alright. He is the manager isn’t he? If I ring Stevie and he says it’s okay, would that get me in?”

But the she stood firm and denied the Liverpool hero access to his former team-mate. Carragher then scampered up to the studio, and then to the commentary box, to watch his former side prevail at Gerrard’s expense.

Although plenty was made of the fact that part of Gerrard would undoubtedly like Liverpool to go on and pip City to the Premier League title, the former England captain made his loyalties crystal clear after the final whistle with a scathing rant on referee Jon Moss.

“No comment, I just hope that [his performance] is looked at,” he said. “I hope it’s looked at. I’ve not been in to speak to him. I don’t want to get into trouble and I don’t want to be sour. We’ve lost the game.

“Liverpool have scored two goals against us and we need to look at that. I don’t want to try and cover over any cracks.” Gerrard was then informed that Moss is set to retire at the end of the season, and after a deep inhale he brutally responded: “Good.”

Carragher was not so riled up by Moss’ officiating, but maintained optimism after the game that the Reds can still claw back ground on Man City. The two teams are currently level on points, but Pep Guardiola’s side have a game in hand and better goal difference.

“[Liverpool] are in a great position,” Carragher told Sky Sports. “Obviously City are in pole position, but the fact that Liverpool can now sit back in terms of the league games and just watch how City do for the next two games, I think in some ways that could determine how Jurgen Klopp goes next week at Southampton away.”