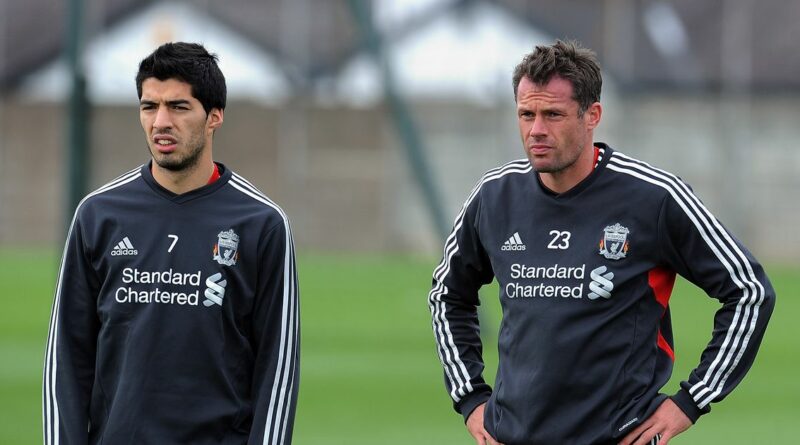 Jamie Carragher had a brilliant reaction to Liverpool's signing of Luis Suarez from Ajax back in 2011 as the Uruguayan forward arrived at Anfield.

Kenny Dalglish signed Suarez on deadline day in January 2011 for £24million and the striker went on to spend three years at the club.

Carragher has admitted he was shocked that Liverpool were able to sign Suarez as the then 24-year-old had been linked with some of Europe's biggest clubs before arriving on Merseyside.

Suarez went on to score 82 goals in 133 appearances for the Reds before leaving to join Spanish giants Barcelona in the summer of 2014.

Speaking to The Athletic, Carragher reflected on Suarez's arrival at Liverpool and said that "When Luis first came to the club my reaction was, 'Oh my god, how have we managed to get him?!'

"It was obvious he was a very special player. He showed it the moment he came off the bench against Stoke."

Suarez scored just 16 minutes into his Liverpool debut after coming off the bench in a 2-0 home win against Stoke City in February 2011.

"To be honest, I was surprised he hadn't been snapped up the previous summer on the back of his performances at the World Cup."

Is Luis Suarez Liverpool's best player of the 2010s? Let us know your thoughts in the comments section below.

Uruguay reached the semi-finals in South Africa in 2010, with Suarez scoring three goals along the way before they were beaten by the Netherlands.

"Obviously there had been controversy with the handball against Ghana – typical Luis. But Ajax are a selling club and you knew they wouldn't be able to hold on to him for long."

Prior to joining Liverpool, Suarez had been courted by a number of clubs around Europe and Liverpool were able to beat off strong interest from Tottenham Hotspur to bring him to the club.

82 goals and 47 assists in 133 appearances for the club followed before he moved on to Barcelona after the 2014 World Cup for a fee worth £74million.

Suarez and Carragher played together for Liverpool a total of 65 times before the latter's retirement in 2013 and won the League Cup in 2012, Suarez's only trophy with Liverpool.