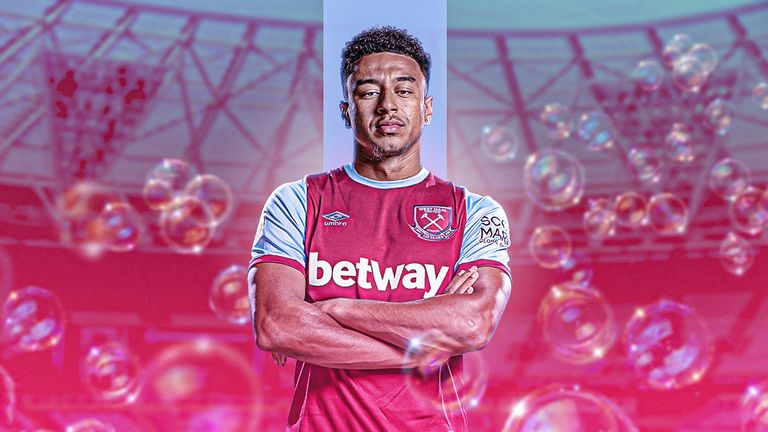 If Jesse Lingard had a point to prove, consider it proven.

The 28-year-old has notched a league-topping eight goals and three assists in just nine league appearances since joining West Ham in early February.

Having failed to clock any game time in the Premier League at Old Trafford this season, Lingard hit the ground running in claret and blue, quite literally.

He marked his return to top-flight football with a double at Aston Villa. Since then, he tops the league for goal involvements – hoisting the Hammers into the top four.

Indeed, the ‘Midas touch’ describes his current vein of form perfectly, hitting the target 17 times from just 21 unblocked attempts, with nine of those finding the back of the net. Those ratios equate to a staggering 81 per cent shooting accuracy and 38 per cent shot conversion.

Such is his form, Gareth Southgate recalled Lingard for the latest round of fixtures after a two-year hiatus on the international circuit and, low and behold, he shone brighter than ever in an England shirt, too – with the exception of that goal against Panama in 2018. 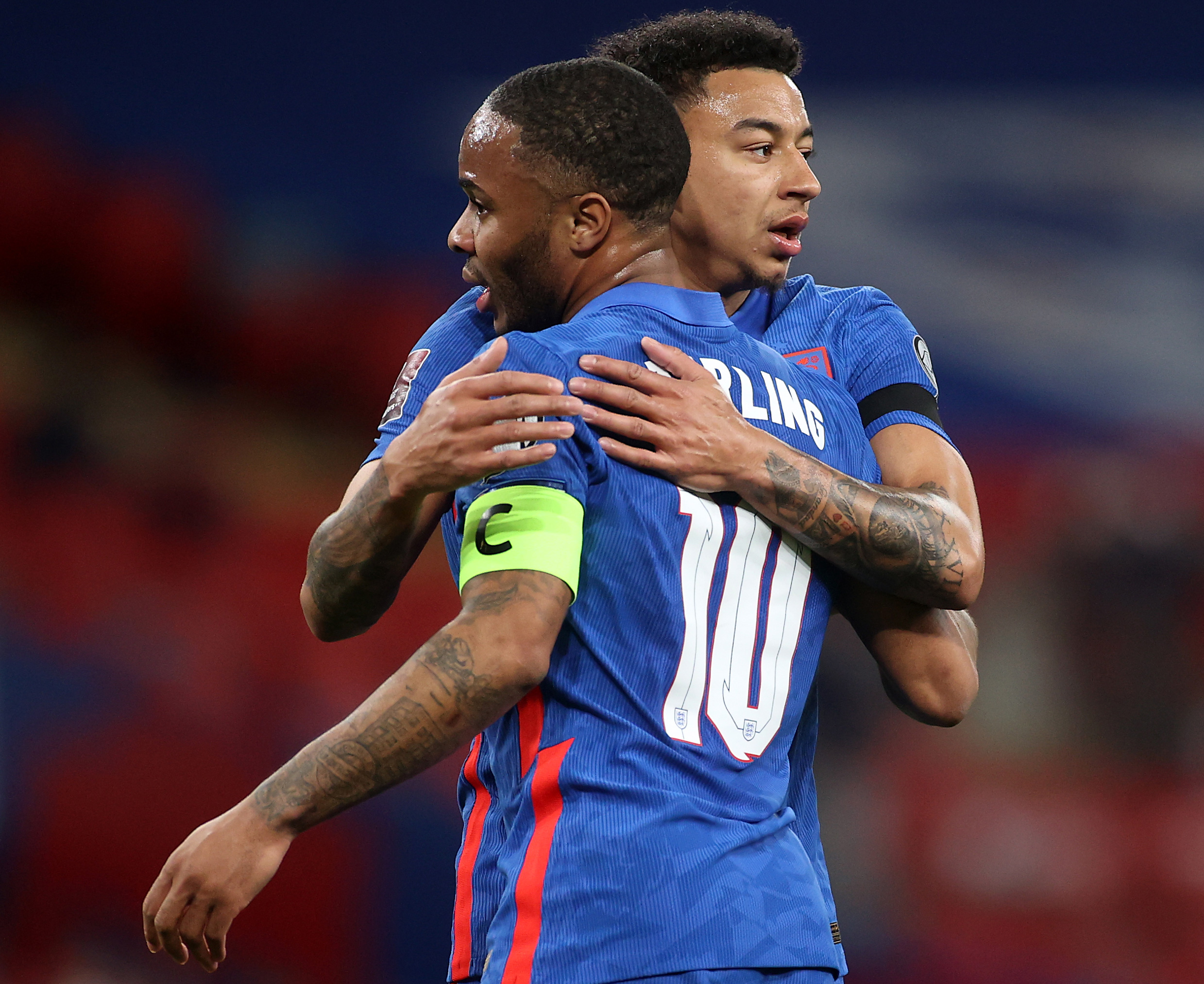 Unsurprisingly, West Ham will do whatever it takes to try and sign the midfielder on a permanent deal but Manchester United could look to reap the rewards upon his return – while Real Madrid are reportedly eyeing a summer swoop.

So what’s changed? Having opened up about his personal struggles, Lingard has also confessed to healing through self-love, citing the motivational book Good Vibes, Good Life as a catalyst – to channel wellness and reignite. 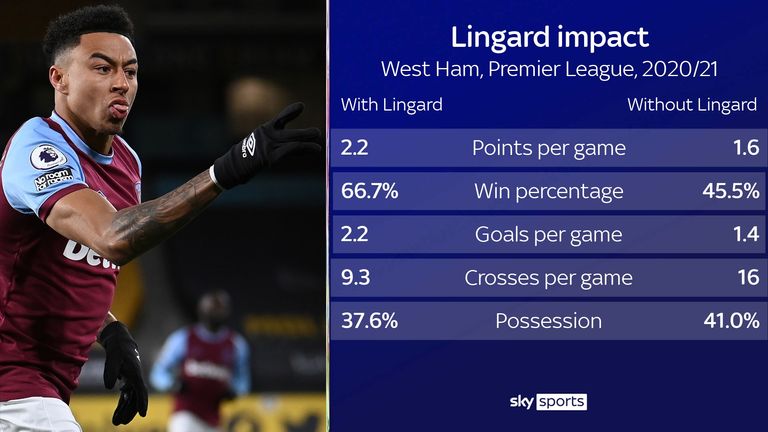 Interestingly, the Hammers average far fewer crosses with Lingard on the pitch and less possession – suggesting a more direct style of play with their star loanee on the field.

Indeed, West Ham have attacked faster than any other club in the Premier League this season, but have also scored more goals from fast breaks since Lingard joined the club.

Additionally, the sheer number of fast attacks has soared since his arrival – suggesting he has fuelled an approach that was already taking shape.

The chart below reveals how West Ham’s fast and direct style is almost the antithesis of Manchester City’s slow and intricate approach. The Hammers’ approach is to counter-attack from deep through advanced opposition lines.

How good is Lingard right now?

In terms of goals and goal involvements, Lingard tops the division since his arrival at the London Stadium and ranks third with three assists. So, right now, he is England’s most clinical finisher. 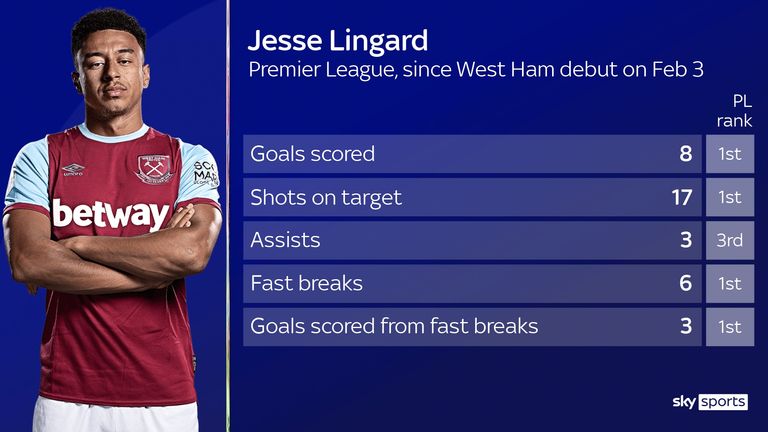 Comparing those figures against attacking midfielders on a pan-European scale, he ranks among the elite across all metrics, in addition to his frequency of shots on target and fast breaks. So the styles of club and player appear to match perfectly. 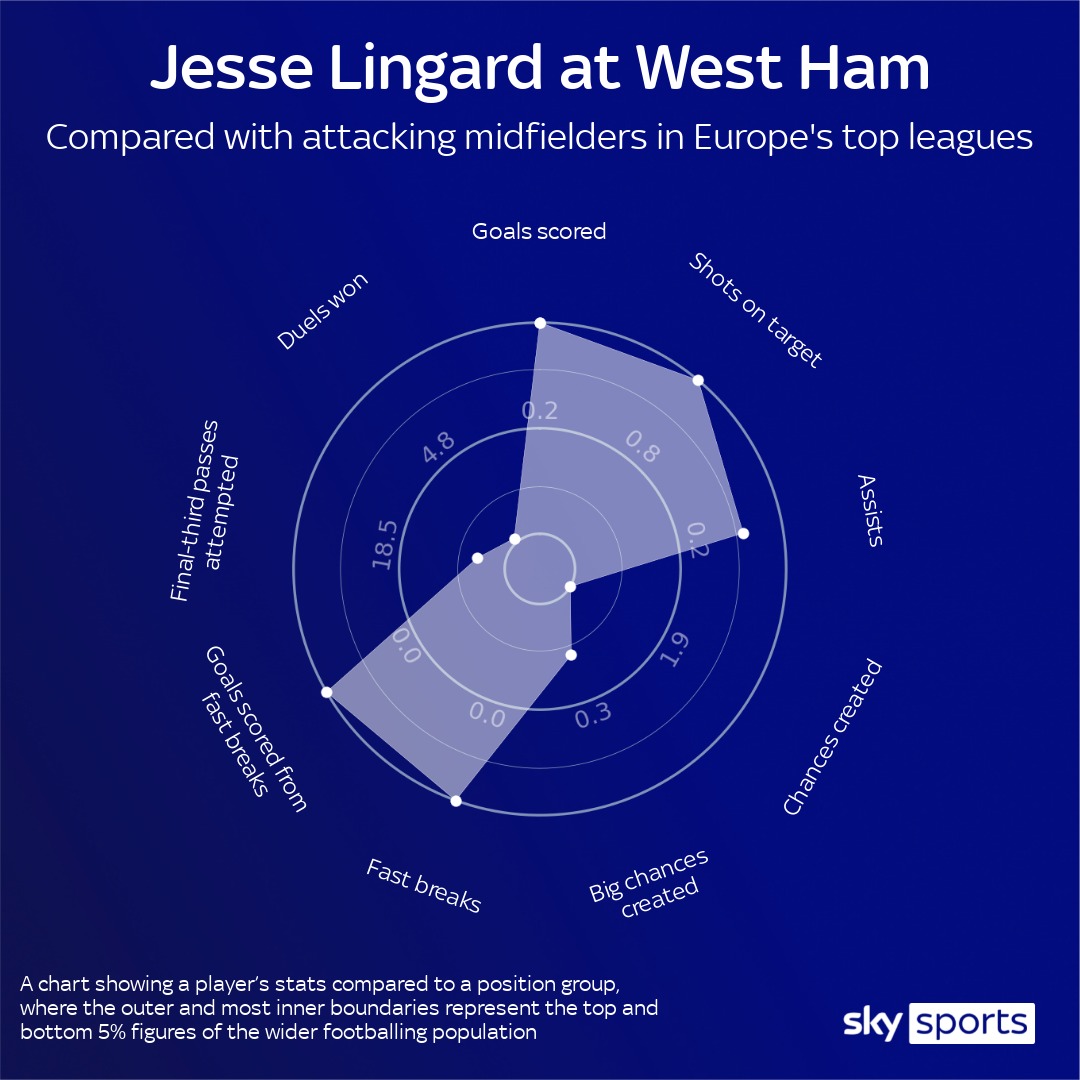 His efforts are accountable, too. Premier League tracking data places Lingard 14th in the league for sprints attempted since his West Ham debut – and he was ineligible to play against his parent club for one league fixture.

While Lingard tops the club’s rankings for sprints, Soucek and Coufal stand out for distance covered. In fact, Soucek tops the division for kilometres covered since the start of this season – epitomising the team’s evolving ethos of hard graft and energy.

What positions is he taking up?

As the graphic below reveals, Lingard has typically taken up advanced positions down the left-of-centre region, almost as a secondary forward behind Antonio, to overload the left flank – primed for breakaway attacks in transition. 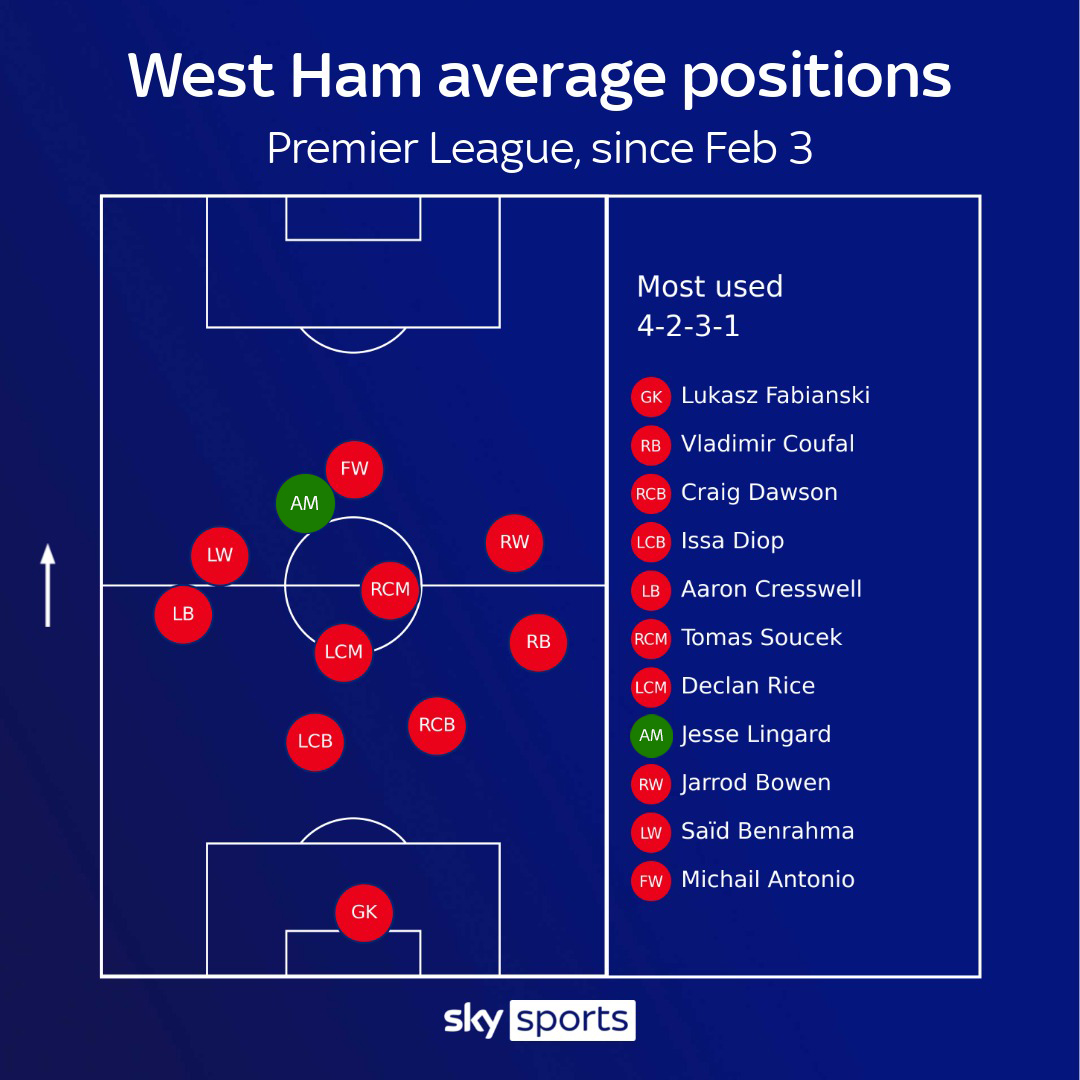 The majority of his minutes to date have come from a central attacking midfielder role, but the majority of his touches and distribution have been down the left flank with the movements of a modern, inverted winger. 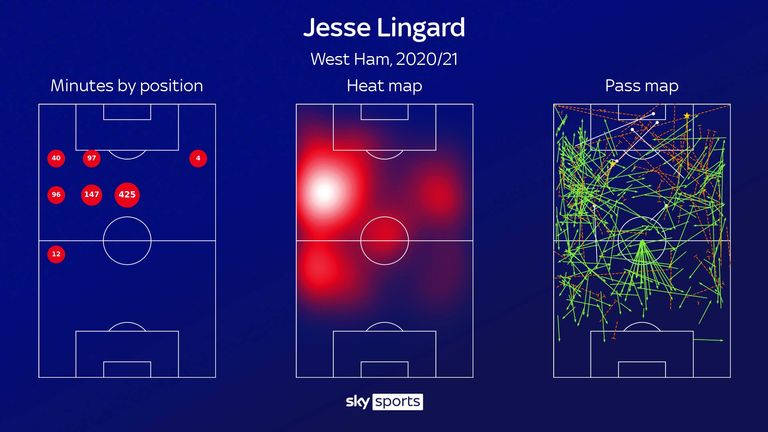 But the graphic below also reveals a broader contribution than just running off the last shoulder. The majority of his dribbles (coloured in white) have occurred from deeper positions to instigate counter-attacks, in addition to clocking two additional second assists and firing crosses from both flanks. 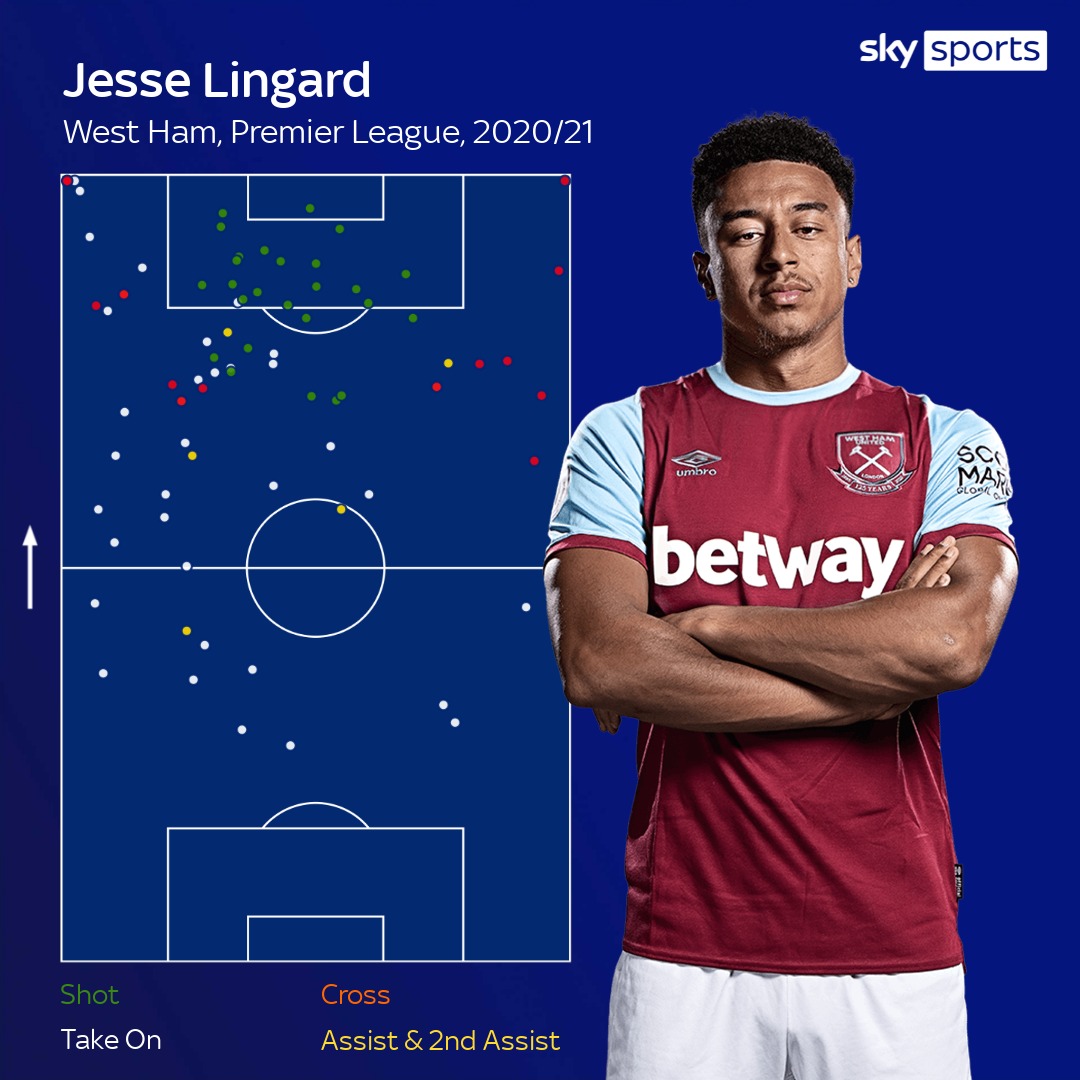 In addition to producing a league-topping eight goals and 11 goal involvements since his debut, Lingard also tops the league for shot conversion (38.1 per cent) and shooting accuracy (80.1 per cent) – factoring players with 15 unblocked shots or more.

The shot map below elaborates on those figures, revealing his economy in front of goal, while also being unafraid to shoot from range. The colour scale indicates post-shot xG, which does little justice for the pinpoint precision of his opener against Leicester but does highlight how his goals have been almost certain to hit the back of the net once fired. And that precision is emphasised in the goal map below, which reveals more than 70 per cent of his shots on target find corners of the goal – scoring three of his four attempts in the bottom-right. 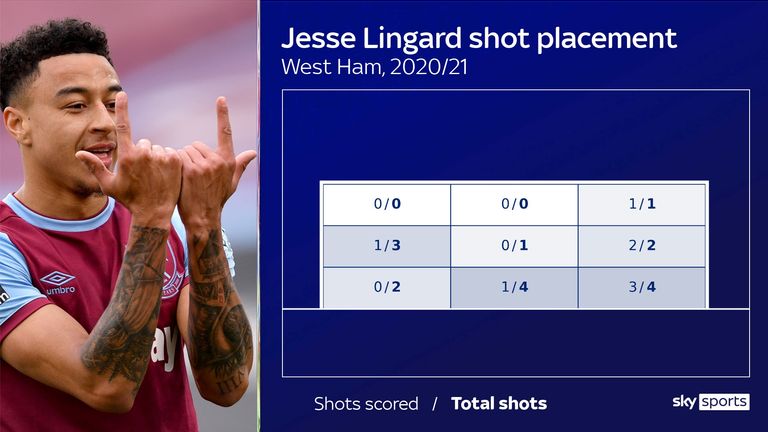 The interactive graphic below provides further insight into his raft of talents, highlighting a tendency to play progressively upfield and his ability to finish with either foot.

The run-in is pivotal for club and player: West Ham would send seismic waves through the league if they pip a Big-Six powerhouse to a top-four finish and achieve Champions League qualification, while an abundance of opportunities appear to be opening up for Lingard – with player and clubs set to determine what the future holds this summer. 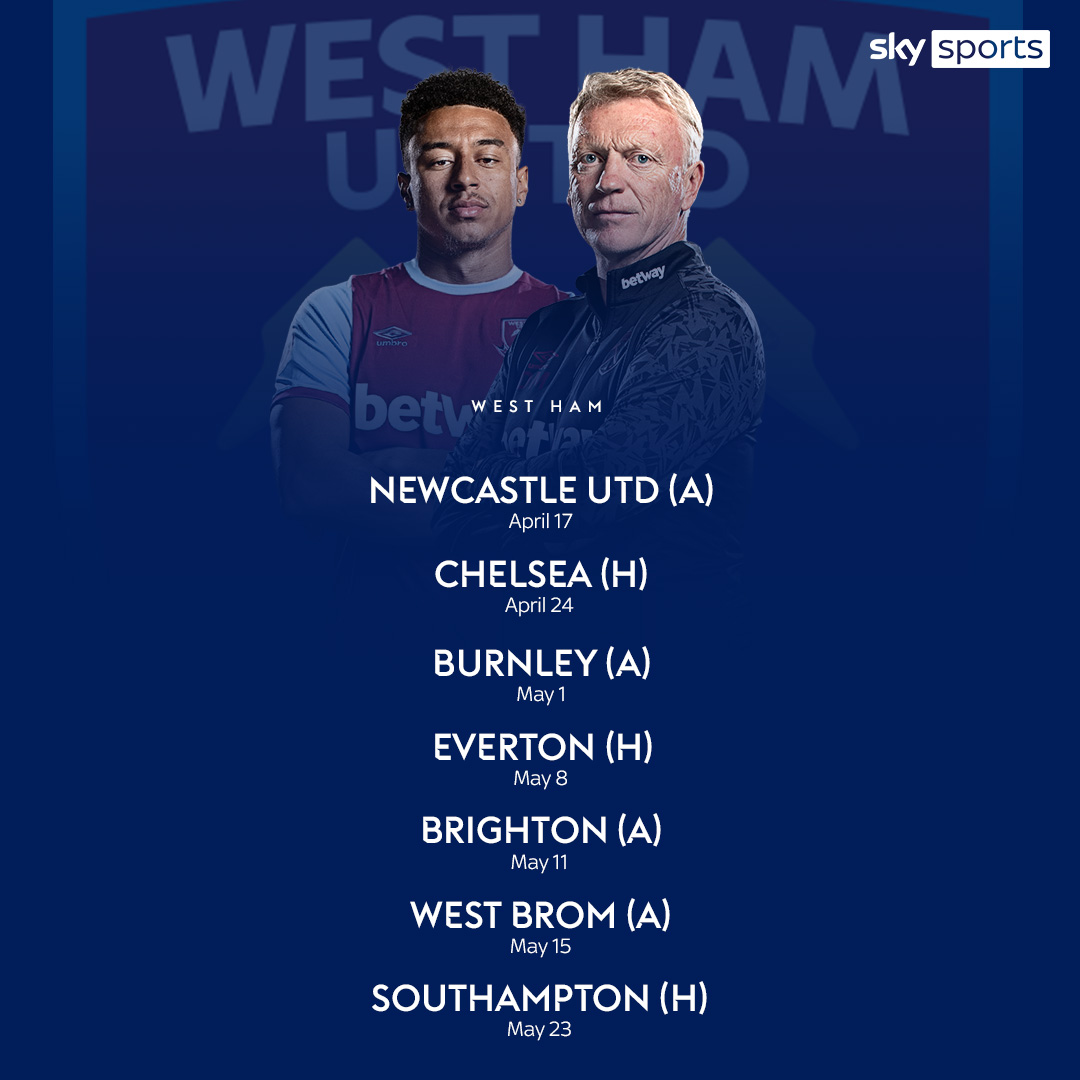 Gary Neville: A win-win situation for both clubs

“We know he’s a good player. United have a big decision to make. Do they cash in and get good money for him, and then replenish the squad in an area they want to, and bring extra quality.

“Or do they think he’s part of a good 23-man squad. He can’t lose with the decision, Solskjaer. His value has gone up, Jesse is enjoying himself, so he either comes back to United or plays a big part in a title challenge, or he gets a good move, United get the money for him, and they can use that money to spend elsewhere. I don’t think United or Lingard can lose, it’s a win-win for both parties.” 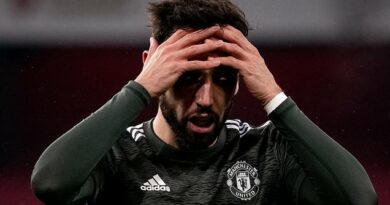