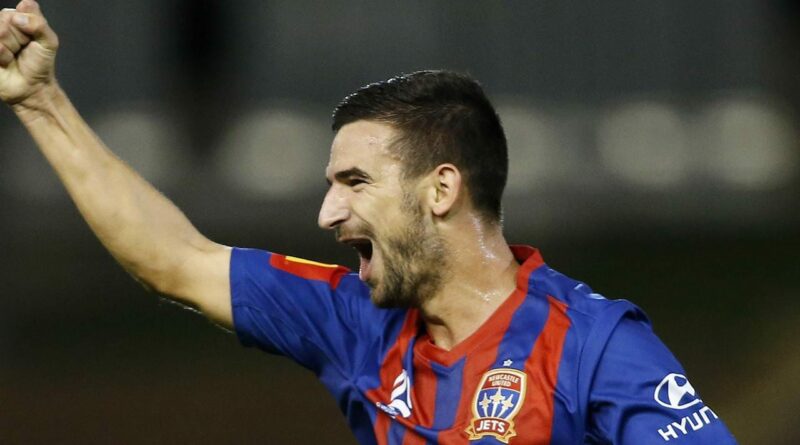 Steven Ugarkovic could make his Western Sydney debut as early as Saturday night after leaving the Newcastle Jets early to join the Wanderers.

The 26-year-old midfielder was due to become a Wanderer next season, but a player swap that has resulted in Jordan O’Doherty departing Western Sydney to join the Jets allowed Ugarkovic to make the move on Friday.

Ugarkovic, who made 135 A-League appearances for the Jets, is in strong contention to be in the Wanderers squad for Saturday night’s battle with Western United at Bankwest Stadium.

We're proud to announce the signing of midfielder @Stevenug14 until the end of the 2021/22 season: https://t.co/DqAfvAJmoM#WSWpic.twitter.com/MTndliXgp0

“It’s an amazing feeling to come back and play where I grew up, to be playing every week now in front of my family is an honour,” said Western Sydney local Ugarkovic, who has reunited with former Jets coach Carl Robinson at the Wanderers.

“I worked under Carl for a short time, but he took my game to the next level and I really look forward to working under him again. He’s that type of coach that can get the best out of me.

“He’s a winner and he brings a fantastic hardworking mentality to our squad,” the Wanderers coach said.

“I didn’t realise how talented Steve was as a player, and after getting to know him as a person while working at Newcastle, he is one of the top midfielders in the country.

“He’s a Western Sydney boy as well and he understands the importance of what it means to represent the region, club and our passionate members and fans.”

We are pleased to announce the signing of Australia U-23’s representative Jordan O'Doherty, effective immediately.

The Jets thanked Ugarkovic for his service and were pleased to have acquired Tokyo Olympics hopeful O’Doherty in return.

Jets executive chairman Shane Mattiske said: “We are pleased to have secured a talent like Jordan and executed a trade for Steven, given he was headed to Western Sydney next season.

“At a young age, Jordan has already played 63 top-flight games and is in the mix to represent Australia in the Olympics.”

“Jordan has shown great resilience and character to come back from injury to play first team football,” Tsatsimas said.

Football Manager 2020 wonderkids: Best players to sign in FM20 for teams of every budget