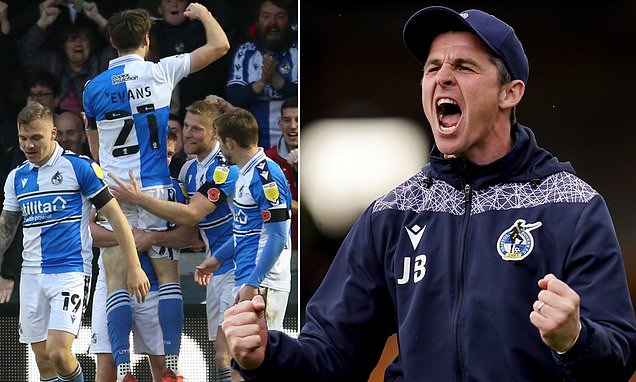 ‘We lit a spark and hope it turns into a bonfire!’: Bristol Rovers manager Joey Barton is in a bullish mood as he eyes up automatic promotion place ahead of crucial final day in League Two

Last-day diplomacy is not on the agenda for Joey Barton as he talks sausage rolls and bonfires, stirs up a cross-city rivalry and needles away at rival managers as his Bristol Rovers team chase promotion from League Two.

Barton lets it be known he is ‘not massively keen’ on Jon Brady at Northampton, holds Swindon’s Ben Garner responsible for the mess he inherited at Rovers, and is confident of climbing out of the fourth tier via the play-offs if results do not go his way on Saturday.

‘The Gas are coming, you can feel it in the ether of the city,’ declares Barton, nearly 15 months into the job at the Memorial Ground. ‘That was my dream, to ignite the blue half of Bristol. We’ve lit a spark and we’re hoping that will turn into a big roaring bonfire in the next couple of years. The rest of the English pyramid will sit up and take notice. 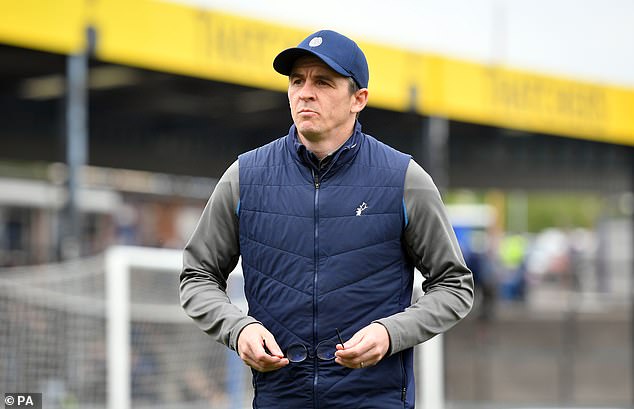 ‘Six months ago, they were throwing sausage rolls and V-signs everywhere telling me to get out of town. It’s a funny old game football. King of the jungle one minute and knocked on your backside next minute. I’ve had both sides of the coin here. Last season was as tough a period as I’ve had in my professional football journey.’

Rovers were struggling in League One when they appointed Barton in February 2021, the former Manchester City and Newcastle midfielder marking a distinct change in policy by Jordanian owner Wael Al-Qadi as his desperation to escape the shadow of Bristol City took a new twist.

Unable to stop the slide towards relegation, Barton publicly lambasted the players and the previous coaching regimes, criticising fitness and professionalism, complaining about ‘fake footballers’ and a culture of chewing tobacco rife at the club.

His populist rhetoric about restoring Rovers to their rightful place in the city went down a storm with those fans who like to revel in the club’s rebellious image. The Pirates, ramshackle and unorthodox, Bristol’s poor relations, an antithesis to shiny corporate wealth and unashamed Premier League ambition on display at Ashton Gate. 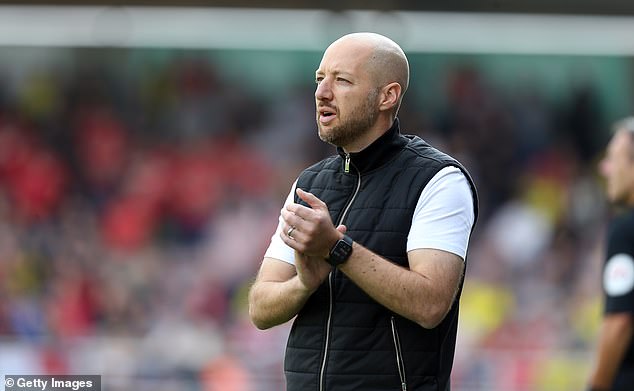 Others have been rather more uneasy about Barton fronting their club while charged with assaulting his wife Georgia during a drunken row, accused of grabbing her by the throat and kicking her in the head, leaving her with a bloody nose, in June last year — allegations he denies. Eight months later, his wife wrote to prosecutors, claiming her injuries happened accidentally when friends intervened in the argument with her husband after they had consumed ‘four or five bottles of wine each’. The trial, which had been set for March, will now be next month.

Purely on footballing grounds, Barton’s job appeared in the balance when his team this season started poorly, flirting with the relegation places in September and still in the bottom half amid a blaze of red cards as autumn turned to winter, but Rovers improved.

James Piercy, sports editor of the Bristol Post, said: ‘Something clicked around the FA Cup tie against Oxford in November. They were 3-1 down in extra-time and won 4-3. Aaron Collins scored his first of the season and went on a run. 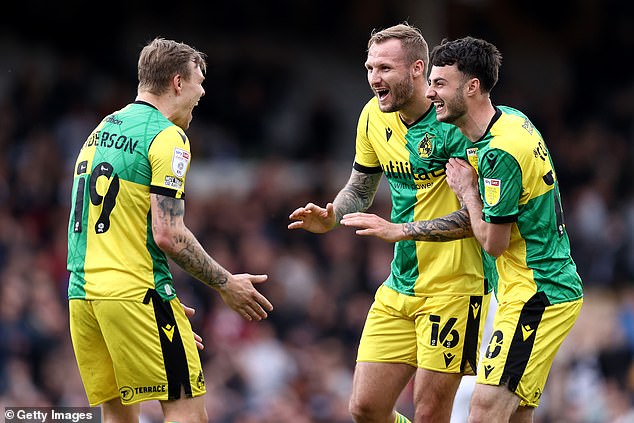 Following a poor start to the season, Bristol Rovers are now in contention for promotion

‘The on-field chemistry, culture, the recruitment has been good, smart loans. The players speak highly of the manager. Momentum, coupled with the belief of supporters, it’s all come together nicely on an upward curve since January.’

Another thrilling comeback at Rochdale last weekend rekindled their hopes of clinching the third and final automatic promotion place, making it a south-west treble along with Exeter and Forest Green.

Two late goals transformed a 3-2 defeat into a 4-3 victory over Dale and those three points catapulted Rovers from eighth into fourth, level on points with Northampton, who drew with Exeter and hold third by virtue of a better goal difference.

Mansfield, Port Vale and Swindon are also in the hunt on what promises to be a tantalising final day.

Northampton should secure third if they win at Barrow, who have improved under Phil Brown and won their last two home games, including a 4-0 win against Forest Green, form which prompted Mansfield boss Nigel Clough to declare Bristol Rovers the favourites. 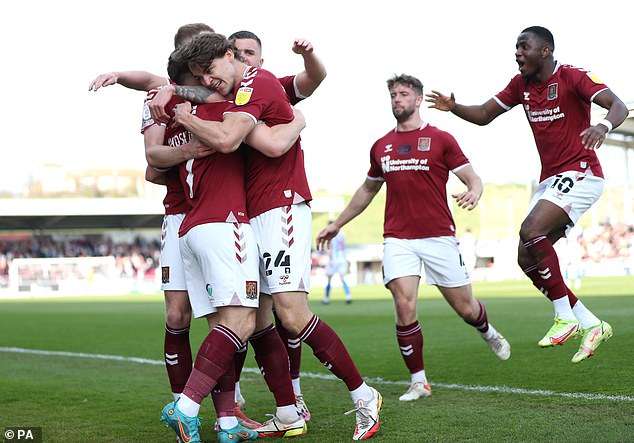 In the way are Northampton, who currently sit third ahead of their game against Barrow

Barton’s side face relegated and beleaguered Scunthorpe, with only one win in 2022, none since early February and with seven teenagers in the starting XI against Hartlepool, last week. Even if Northampton win, Rovers can still catch them if they can beat their score by five goals.

Mansfield are fifth. To go up automatically, Clough’s team must take maximum points at Forest Green and hope the two immediately above them fail to win.

Port Vale can leap from sixth to third on the final day if they win at leaders Exeter and the three above them drop points. Even Swindon in seventh are not entirely out of the picture as they travel to Walsall.

Swindon must win and hope both Northampton and Bristol Rovers lose and Mansfield and Vale do not win.